Syrian bishops kidnapped in Aleppo still missing one month on 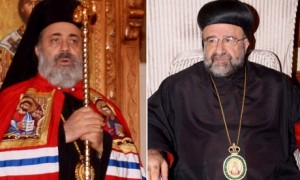 One month after two Orthodox Christian bishops were kidnapped by gunmen in Syria, officials say they still have no idea what has happened to the missing prelates.

The clerics, the most senior church officials to be targeted since civil war engulfed the country, have not been heard of since their abduction at gunpoint in the northern city of Aleppo on 22 April.

“We are deeply worried for the lives of archbishop Mor Gregorius Yohanna Ibrahim of the Syriac Orthodox Church and bishop Boulos Yazigi of the Greek Orthodox Church,” said Katrina Lantos Swett, who chairs the US Commission on International Religious Freedom (Uscirf).

“These two religious leaders put aside their own safety by travelling to one of the worst areas of fighting to help those Syrians left with few basic necessities after more than two years of war,” she said in a statement released on Tuesday.

“The United States and the international community must leave no stone unturned to free the archbishops and halt sectarian violence.”

The two men, who are based in Aleppo, were seized as they returned from a humanitarian mission in neighbouring Turkey. Their driver, a cleric with the rank of deacon, was shot and killed in the attack.

Although there have been an array of rumoured sightings since, authorities admit they have made little progress locating the bishops or establishing which group is holding them.

“We are in daily contact with officials across the region,” said A Greek foreign ministry spokesman, Gregory Delavekouras. “Information is coming through all the time but absolutely nothing has been confirmed so far,” he told the Guardian. “We remain completely in the dark.”

Athens has set up a crisis management team, sent an emissary to the Middle East, contacted governments across the region and used its considerable contacts with the Syrian opposition in a bid to shed light on the clerics’ whereabouts.

The Greek Orthodox Church, which has representatives across the Middle East, has also weighed in, and the Greece‘s prime minister, Antonis Samaras, has appealed for help to Istanbul-based ecumenical patriarch, Bartholomew, spiritual leader of the world’s Orthodox faithful.

“All the stops have been pulled out,” said one insider, saying that because of its geopolitical position at the east-west crossroads, Greece had “better contacts and better chances” of finding the bishops than other western allies.