As some 450,000 Christians have fled Syria since a civil war erupted two years ago, the Syrian Patriarch of the Melkite Greek Catholic church has called on Christians to stay in Syria and survive a “difficult” future.

“I say to my children, stay in your country, the future will  be difficult, but it will be better, God willing,” Syrian  Patriarch Gregory Laham told AFP in an interview.

On the eve of a trip to the Vatican for meetings with Pope  Francis, Laham urged European countries to not “encourage  Syrian Christians to emigrate.”

“I say to the European countries that want to help, help  people in difficulty, humanitarian cases but don’t encourage  people to emigrate,” he said.

According to the cleric, 450,000 Syrian Christians have been  forced from their homes by the civil strife that began in March  2011.

The religious leader said that between 1,000 and 1,200  Christians, both soldiers and civilians, had been killed.

Pope Francis also said the Catholic Church “will not resign”   itself to a Middle East without Christians.

“Syria, Iraq, Egypt and other areas of the Holy Land sometimes  overflow with tears,” he said on Thursday, calling for   “the universal right to lead a dignified life and freely  practice one’s own faith to be respected.” 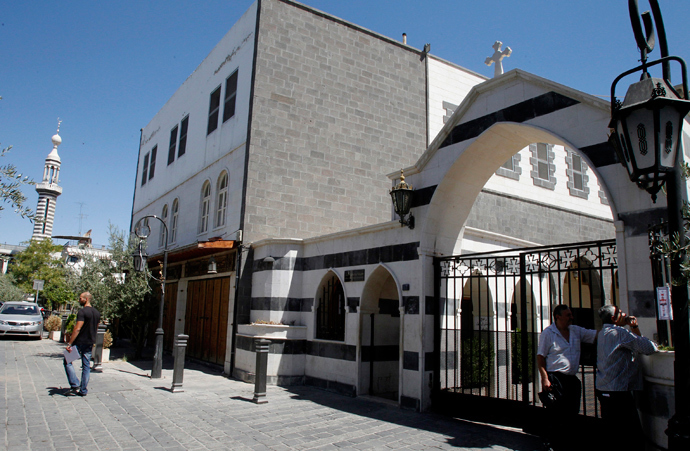 RT correspondent Paula Slier was in Syria, where she got a  firsthand look at the devastation suffered by dozens of Christian  churches.

After the murder of Father Bassilius Nassar in January 2012 by  rebels, threats and persecutions against Christians in Syria have  escalated to the level faced by Christians in Iraq, Slier  reports.
In August, the Christian town of Maaloula outside of Damascus was  attacked by rebels. Dozens of soldiers were killed and many  residents fled.

Patriarch Laham pointed out that Christians have not been the  only victims of the violence.

He also mentioned that “at least 57 Christian sites” have  been damaged or destroyed since the beginning of hostilities, and  he blamed the United States and its Western allies for  aggravating the situation by providing assistance to the rebels.   “This is the church. Unfortunately, it was not like that before.  Look at this destruction and mess. From here the explosions were  coming down on people praying. Of course people started crying  out for help from us. The priest was right here and they were  captured right here in the church,” Syrian army soldier  Bassam Shaaban told RT’s Paula Slier.

Christians, who comprise about 10 percent of Syria’s population,  are viewed as supporters of President Bashar Assad, fearing the  Islamist ideology of some rebels. This has made them the target  of attacks.   “I believe it is all systematic and planned,” Sami Housni, a  Christian priest in Damascus, told RT. “Forcing Christians to  leave… In Iraq, for instance, less than 200,000 Christians  remain. We do have concerns, we do hope to stick to our land –   Syria, which is the cradle of Christianity. We also hope that the  Pope and heads of Christian denominations shall call for  denouncing violence and adopting dialogue.”

The civil war between insurgent rebels and government forces  loyal to Assad has killed more than 120,000 people, according to  UN estimates, and displaced millions over the last two years.

The International Society for Human Rights says that four out of  every five acts of religious discrimination in the world today  are perpetrated against Christians. Nowhere is this more acutely  felt than in the Middle East and North Africa.

Most viewed articles
Life Truly Genuine and Authentic in the Eyes of God107
Patriarch Kirill: “We Should Pray for Our Lord to Strengthen Fraternal Feelings of the Peoples of Holy Rus”90
How to Deal with Sin75
Holy Cincture of the Theotokos to arrive in France next week56
The Authenticity of the Vision of Christ in the Life of Saint Silouan56
The Bulgarian Church Can Canonize Its First Patriarch47
“The models par excellence are the great hesychast saints,” says Romanian Orthodox Bishop of Oradea41
Most popular authors
Pravmir.com team137
Fr. Theodore Stylianopoulos107
Archpriest Basil Ross Aden75
Aurelian Iftimiu56
Archimandrite Zacharias Zacharou55
Ștefana Totorcea41