Syrian Church Representative in US Calls for End to Bloodshed 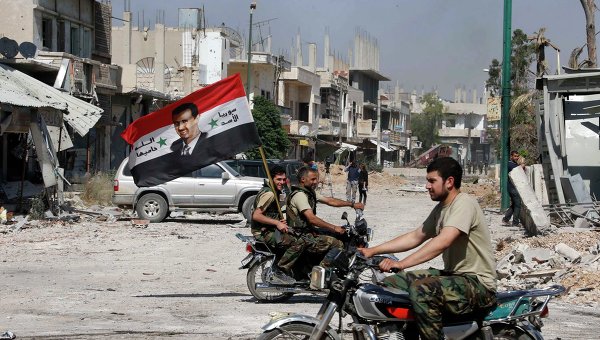 MOSCOW, August 30 (RIA Novosti) – A Syrian Christian church representative in New York called on Friday for the world community to peacefully resolve the “endless war” in Syria, amid US talks of military intervention in the two-year civil war.

The entire world community needs “to sit down together and, through peaceful conversation, agree on a resolution instead of this endless war. That is my message,” Bishop Nicholas Ozone, who serves the Antiochian Orthodox Christian Archdiocese of North America, whose patriarchal headquarters is in Damascus, told RIA Novosti.

US President Barack Obama said Friday that he was considering a “limited” attack in Syria, where, according to the United Nations, more than 100,000 people have already been killed in the civil war. US Secretary of State John Kerry said in a speech the same day that there was “clear” evidence that the Syrian government had carried out toxic gas attacks on its own citizens.

Bishop Nicholas said some 3 million Christians were living in Syria at the onset of the conflict, but many had since fled under asylum to France, Britain, the United States and Russia. He said he hoped they would return when the conflict was over.

In July, representatives of the world’s Orthodox Churches gathered in Moscow for celebrations of the 1025th anniversary of the Christianization of Kievan Rus, a medieval state comprising parts of modern-day Russia, Ukraine and Belarus. They adopted a joint statement focusing on the position of Christians in the Middle East.

The document’s authors paid attention to instances of persecution of Christians in the region and called for a moratorium on military actions in Syria.

The UN Security Council has so far not authorized any military intervention in the Syrian crisis. Moscow, along with Beijing, has previously vetoed three UN Security Council resolutions condemning Syrian President Bashar Assad’s government. Russia has urged all parties to the conflict to use diplomatic means to resolve it.

Russia has been Syria’s most important ally during the civil war. Russian Foreign Minister Sergei Lavrov has said it is necessary to wait until UN experts finished their probe into claims that chemical weapons had been used in Syria before considering military action.

Most viewed articles
Metropolitan Hilarion of Eastern America and New York to Be Buried in Jordanville on May 22232
Patriarch Kirill: The Peoples of Russia and Ukraine Have No Interest in the Conflict189
Communion restored between the Serbian Orthodox Church and the Macedonian Orthodox Church – Ohrid Archbishopric138
Metropolitan Hilarion of Eastern America and New York Reposes in the Lord132
What Do We Celebrate at Mid-Pentecost?114
Family Life and Spiritual Warfare80
Celebrating 100 Years with Paschal Joy73
Patriarch of Serbia to Concelebrate with Archbishop Stephen of Ohrid52
Concelebration of Divine Liturgy by the Serbian Patriarch and Archbishop of Ohrid in Belgrade (VIDEO)49
China’s Internet Clampdown Is Step Closer to ‘Cancelling Christianity’41
Most popular authors
Pravmir.com team792
Ioannis Foundoulis114
Archpriest Michael Gillis80
Priest Luke A. Veronis73
Donna Birrell41