Prosecutors in the Russian republic of Tatarstan said they were seeking a case on terrorism charges opened into burnings of Christian churches in the predominantly Muslim region. 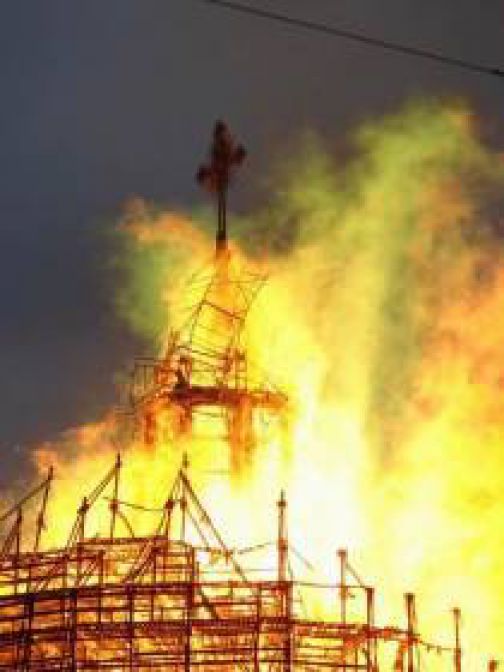 Seven Orthodox Christian churches were torched in Tatarstan over the past six months, including two on Thursday night, Regnum.ru news agency said.

The republic’s prosecutor general on Thursday blamed the attacks on unspecified extremists in a statement on Tatarstan’s prosecutor office’s website.

The perpetrators could face up to 20 years in jail on terrorism charges.

Komsomolskaya Pravda said investigators were inclined to blame the arsons on Wahhabis, adherents of a radical branch of Islam favored by many Islamic terrorists in Russia. Tatarstan has been largely unaffected by the wave of militant Islamist extremism that has swept the Russian North Caucasus since the Soviet Union’s demise. But the number of incidents involving alleged Islamists has been rising in the republic on the Volga River.

Incidents over the past year included attacks on pro-governmental Muslim clerics, rallies in support of al-Qaida, and police shootings of terrorism suspects. Tatarstan has a population of 3.8 million, about 53 percent of them ethnic Tatars and 40 percent Russians, according to the nationwide census of 2010.

Most viewed articles
Schedule of the Funeral and Burial Services of His Eminence Metropolitan Hilarion184
A Priest Remembers His Beatitude Metropolitan Hilarion of Eastern America and New York100
The Good Leaven from Outside the Supposed Goodness82
The Gift of God72
Patriarch Daniel to Orthodox Youth: The Joy of Prayer Enlightens Good Deeds65
Sainthood of Hesychast Saint Theophano Basarab, proclaimed by Romanian Orthodox Church in Solemn Year of Prayer41
Blasphemous and Obsessive Thoughts Come Into My Mind. What Do I Do?11
Most popular authors
Pravmir.com team184
Aurelian Iftimiu106
Archpriest Peter Olsen100
Metropolitan Siluan (Muci)82
Fr. Theodore Stylianopoulos72
Fr. Eugene Murzin11