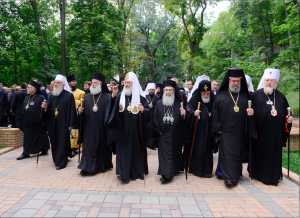 July 27, 2013 – His Holiness Patriarch Kirill of Moscow and All Russia and His Beatitude Metropolitan Vladimir of Kiev and All Ukraine celebrated a thanksgiving on St. Vladimir’s Hill crowned with a monument to the Holy Prince Vladimir Equal-to-the-Apostles the Baptizer of Rus’.

Praying before an icon of St. Vladimir and a shrine with a part of this relics were Primates and representatives of Local Orthodox Churches who came for the 1025 anniversary of the Baptism of Rus’ celebrations from Belarus, Moldova, Russia, Ukraine and other countries.

In his homily after the thanksgiving, Patriarch Kirill spoke of the spiritual feat performed by St. Vladimir. ‘He spiritually and even philosophically gave up all he had had in order to find a new spiritual intellectual dominant. And found it in the Kingdom of God and the truth of God. We know what happened to this heathen prince who had waged fratricidal wars, sought to devastate Byzantium and breached all limits, often killing innocent people. But he transformed himself and his life to become for people ‘Vladimir the Red Sun’.

‘St. Vladimir accepted God’s truth as the dominant of his life and wished this dominant to be present in people’s life. And it happened so. Going through enormous hardships, Rus’ was deprived of much, but then acquired much, always seeking to realize this Divine ideal in life. It was a national value dominant. Indeed, it was why Rus’ was called Holy Rus’ – because holiness, life with God and God’s truth were the ideal of people’s life.

‘In the parable we heard there is another image, that of a net. The Kingdom of God is like a net which takes in all the fish on its way in the sea. But when the net is taken ashore, good fish is left but bad fish is thrown away. And we should remember about the part of this parable which speaks of the Lord’s judgment. The criterion for God’s choice between those who are to be justified and who are to be condemned will be precisely the extent of one’s faithfulness to God’s truth. And this truth must be realized not only in the private life of each of us but also in the life of societies and peoples…

‘This great ideal is included in our national culture; it is reflected in the art, architecture, music, literature and philosophy. And even when people had doubts, even when many denied the very existence of God, the theme of search for God and inner intellectual and spiritual struggle was in the center of both philosophical thought and literature and people’s spiritual search.

‘We know how enormous were the forces which worked to destroy this spiritual dominant of our nations, but they have failed. And today we celebrate in a sense not only the 1025th anniversary of our history tracing back to the baptism in the Dnieper but also the 25 years which have elapsed since the day when we celebrated the Millennium of the Baptism of Rus’. These have been the years of the second Baptism of Rus’, the years of transformation in the life of our nations and our Church, that same Russian Orthodox Church which as mother safeguarded the spiritual value dominant of life chosen by Prince Vladimir.

‘I would like to greet the heads of state who are present here today. We rejoice in the fact that you are standing together. It means your participation and your peoples’ sharing not only in the celebrations as a historical fact but also in all that the baptism has brought to our land.

‘I would like to thank you, Vladimir Vladimirovich, for the participation of the Russian state in the organization ,of this feast. It really rallies our nations and makes clear the way of our joint historical development.

‘I thank the Ukrainian people and those who are with us and those who for some reasons are not with us today for the fact that Orthodox Christian faith is present in the life of the Ukrainian people. I trust that each who devotes his heart to the ideal, who has enslaved the heart and consciousness of Prince Vladimir, will seek to help overcome all the divisions and obstacles so that the Ukrainian people together with other peoples of Holy Rus’ could glorify the name of the Lord and Saviour in one mouth and one heart.

‘May God’s blessing and the protection of the Most Holy Heavenly Queen, through the intercession of the Holy Prince Vladimir, stay with Holy Rus’ till the end of times, so that Holy Rus’ herself may remain invincible, being a spiritual a pivot for millions and millions of those who seek God’.

In his remarks, His Beatitude Metropolitan Vladimir of Kiev and All Ukraine underlined that the choice made by the Holy Prince Vladimir determined the course of our history and today, he said, ‘we are responsible for the preservation of the spiritual heritage and Christian ideals in this world which, unfortunately, is drifting away from the Christian moral norms’.