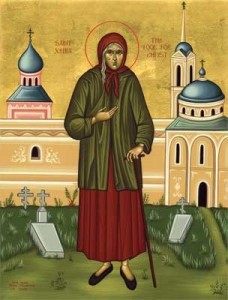 Tuesday, September 24, 2013 , will mark the 35 th anniversary of the glorification of St Xenia the Blessed of St Petersburg by the Russian Orthodox Church Outside of Russia. The clergymen of the Synodal Cathedral of Our Lady “of the Sign” will celebrate Divine Liturgy and perform a ceremonious moleben, as the Cathedral Choir will sing under the direction of Peter Fekula. The canonization, performed in 1978, served to spiritually bolster those who served God in the Russian diaspora as well as in the Fatherland, who all waited with trepidation for the rebirth of the Russian Church, which had brought forth an abundance of New Martyrs and Confessors in the 20 th century.
Below is a video of the glorification, which was headed by Metropolitan Philaret (Voznesensky,+1985) of blessed memory, along with the members of the Council of Bishops of the Russian Orthodox Church Outside of Russia and a large gathering of clergymen and worshipers: