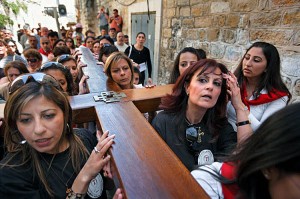 The recent abductions of Syriac Orthodox Archbishop Yohanna Ibrahim and his Greek Orthodox counterpart, Paul Yazigi, reflect not only the increasing brutality of Syria’s civil war, but also the escalating crisis for Christians across the Arab world – one that could end up driving them away altogether. According to the International Society for Human Rights, 80 percent of all acts of religious persecution worldwide in 2012 were directed against Christians. This surge in discrimination against Christian communities in countries where they have lived for many centuries can be explained largely by increasing Islamist militancy and the rise of political Islam in the wake of the Arab Spring. As Islamist parties have taken power in the region, a wave of intimidation and discrimination has been unleashed on Christian minority populations.

For example, on Feb. 26, at a garment market in Benghazi, Libya, members of a powerful Islamist militia rounded up dozens of Egyptian Coptic Christians – identified by crosses tattooed on their right wrists – whom they then detained, tortured and threatened with execution. Among the victims was a Coptic priest, whom the captors beat severely before shaving his head and moustache. Priests have also been assaulted in Tripoli and churches have been torched. All of this sends a clear message: non-Muslims are not safe in Libya.

While Libya has no significant religious minority, hundreds of thousands of Egyptians live and work in the country, where Christian proselytizing is illegal – and where one can be accused of proselytizing simply for possessing a Bible. But Egypt’s Muslim Brotherhood-controlled government does not seem particularly eager to protect its Christian citizens in Libya; it offered only a halfhearted call for the release of its detained citizens.

This reflects the similarly deteriorating situation for Christians in Egypt, where they account for roughly 15 percent of the population. In early April, a funeral at St. Mark’s Cathedral (the seat of the Coptic Church in Cairo) for four Christians killed in sectarian rioting days earlier descended into chaos, with thousands of mourners attacked as they tried to leave after the service. Police fired tear gas into the compound, standing by as those outside the cathedral launched petrol bombs, hurled rocks and shot at those inside. At least two died and 80 were injured in the five-hour clash.

Christians blame the Muslim Brotherhood not only for allowing Muslim Egyptians to attack them with impunity, but also for permitting – and delivering – incendiary anti-Christian rhetoric. For example, at an open rally for President Mohammad Mursi last year, the cleric Safwat Hegazy warned that Egyptian Muslims would “splash blood” on Christians who “splash water” on Mursi’s legitimacy.

In February, Egypt’s Coptic patriarch, Pope Tawadros II, sharply criticized the country’s leadership in a televised interview, calling the new constitution discriminatory and dismissing Mursi’s “national dialogues” as an empty gesture. This unusually assertive stance reflects rising frustration among Christians, as well as among the secular and liberal opposition, with the Muslim Brotherhood’s power monopoly.

Syria, which once welcomed thousands of Christians fleeing war-torn Iraq, is experiencing an analogous change, as the country’s increasingly sectarian civil war generates fear and mistrust throughout the population. Although Christians have largely sought to remain neutral in the conflict, they have become involved gradually, some by taking up arms and others as victims of kidnapping and violence.

Melkite Greek Catholic Patriarch Gregorios III recently stated that, since 2011, over 1,000 Christians have been killed and more than 40 churches and other Christian institutions (schools, orphanages, and care homes) have been damaged or destroyed. Some estimate that 300,000 Christians have fled Syria.

Furthermore, fallout from relentless regional conflict is destabilizing Lebanon, a country that offers Christians a constitutional guarantee of political representation. Some 400,000 refugees – many of them Sunnis, including fugitive rebels – have poured over the border from Syria, exacerbating sectarian tensions and threatening to disrupt Lebanon’s delicate social and political balance.

Given that, as Gottingen University’s Martin Tamcke points out, there is no remaining alternative for Christian refugees in the Middle East. They are increasingly heading to Europe and North America. If this trend is allowed to continue, the Middle East will gradually lose its Christian congregations. In order to prevent such a tragic outcome, Western leaders must take a more active role in advocating the protection of Christian minorities throughout the Arab world.

Ultimately, Christians and Muslims in the Arab world have the same desires: freedom, dignity and equal rights. Those who are persecuting Christians should recognize that the Arab Spring should benefit all Arabs.

Fiorello Provera is vice chair of the Foreign Affairs Committee in the European Parliament.

Most viewed articles
Last Man Standing175
Metropolitan Hilarion Speaks on Whether It Is Possible for ROC to Reunite with Old-Believers133
Saint Macrina the Younger as a Model for our Lives112
Christ Forgives and Heals98
Metropolitan Onuphry: People Get Strength for Life and Salvation in the Church54
Turning Trials Into Hope52
Businessman Buys a 19th Century Church and Returns It to the Faithful48
The Temple of Woke: Are Universities Basically New ‘Religious’ Training Centers?1
Most popular authors
Pravmir.com team235
Archpriest Geoffrey Korz175
Protopresbyter Fr. George Papavarnavas112
Fr. Theodore Stylianopoulos98
Fr. James Guirguis52
Eric Hyde1