The authorities are not bringing Archbishop Jovan to trial for more than three months! 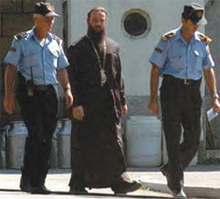 On March 12, 2013, one year and three months are concluded since Archbishop Jovan of Ohrid and Metropolitan of Skopje is found in detention!

The last court hearing in the latest staged court process on religious grounds against the Archbishop, the Bishops, monastics and faithful people of the Orthodox Ohrid Archbishopric was held on December 11, 2012.

Despite the recommendations by the European Union for not prolonging the court proceedings, this process has been persistently delayed; namely, it was first scheduled for January 16, 2013, but it was cancelled! Then, also the hearing scheduled for February 20, 2013 was cancelled. Archbishop Jovan is in detention, the Bishops, monastics and the faithful people are regularly reporting to the court, hence they are not the reason for the delaying of the court process!

An impression is being made as if there were a political decision for delaying the court proceeding with the purpose of prolonging the torture of Archbishop Jovan of Ohrid through the severe detention regime in which he is found. Because, what is the legal basis for keeping someone for such a long time in detention, in order to take him to trial, while the court is continually delaying the trial! More than three months Archbishop Jovan has not been brought to trial! The pressures upon him in the detention regime are being carried out by various means: he is placed in a small and stifling room, with little light, without health care and without a permission to receive visits! No one of his closest people has visited him since June 11, 2012!

Through the constant opening of new court processes and through the imprisonment sentences, as coming from the times of the party-rule, and also – according to the new analysis of Professor Mirjana Najcevska – through the illegal handcuffing of the citizens members of the Orthodox Ohrid Archbishopric before the eyes of the truth-loving domestic and international public, the authorities of R. Macedonia are performing state pogrom on religious basis against the members of one canonical and pan-orthodoxly recognized Church.