For us, Orthodox Christians however, death is not the end but is a new beginning. In all funeral Orthodox services we never use the term dead, but rather passed unto the Lord. The saints are commemorated not on their birth date, but on the date of their death, the moment when their earthly endeavors were accepted into the kingdom of heaven. If we die with Christ, we believe we will be resurrected with Him, so death does not frighten us.
Fr. Vasile Catalin Tudora | 11 August 2008

At the dawn of Christianity, when the pagan religions were still dominating the world, the few Christians that were living in the Roman Empire were called sometimes with the pejorative “body lovers”. The reason was not a predisposition to indulge in sin, which they were far from, but the simple fact of taking good care for the bodies of the loved ones that have passed away. The cult for the deceased was well developed even from the first centuries and the cemeteries had a great prominence, see the catacombs. The care for the dead was was not expressed however just in the funerary rituals but something even more profound was surfacing. For the pagan world, that was already regarding with suspicion and misconception this small “Jewish sect” the most outrageous thing was that the Christian bodies were committed to earth, instead of using the more common means of disposing of the bodies at the times: cremation, the burning of the bodies.

You may ask why I am “digging” this old story after 2000 years? This theme is of out most importance nowadays because cremation gets more and more acceptance even among Christian denominations. For the sake of a quick profit funerary companies openly advertise cremation as a quick and affordable procedure. Highway billboards reading “Total cremation: $995!” are part of the daily commute. We cannot stop but wonder what a partial cremation would be!

If I have to agree with one thing people say, funerals today are not a cheap endeavor; however money should not be the reason why people should choose cremation over traditional burial. Especially since the Church recommends only proper care and modest funerals, nothing extravagant or out of the ordinary. Keeping the midway as always, the Orthodox Church recommends the burial not just as a caprice but as a true expression of our belief in Christ and Resurrection, with deep theological roots. 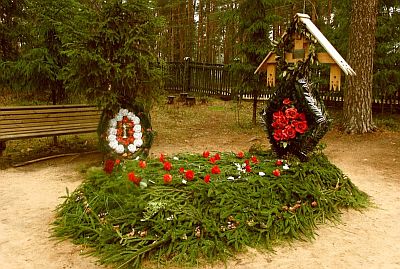 Going back to the beginning we recall that Man was shaped in God’s image through a special act of creation. “God formed man of the dust of the ground, and breathed into his nostrils the breath of life; and man became a living soul.”(Gen 2:7). All the other creatures were brought into existence with a simple “let there be”, but God took the time to fashion man with His own hands into what St. Apostle Paul calls “the temple of the Holy Spirit” (1Co 6:19. Man was created at once as a unique being, body and soul, a dual unity: material and spiritual. St. Gregory of Nazianz comments: “God mixed earth with spirit and created a being which is visible and invisible being, ephemeral and everlasting, earthly and heavenly in the same time”.

To further emphasize the importance of the body Christ Himself, the Son of God, chose to show Himself to us as a Man, not as a spirit; being born in the world from a woman, like every one of us. Christ also rose from the dead not as a spirit, but again with the same body that was crucified and put into a tomb. His resurrected body was real, although spiritualized, showing all the marks of the wounds to St. Thomas and the Apostles to put to rest any doubt.

From Christ’s example we should realize that our bodies are important even after our souls have departed from them. Committing the bodies into the ground is to let God decide what is going to happen to them. Some will be corrupted and will decay returning into the earth from which they came, others, chosen by God, the saints, will go into incorruption. The miracle working relics of the saints are the proof of the link between our bodies and our souls. In the grace of God the bodies of the saints remain in a mystical bond with their souls being able to continue to perform miracles even after they have departed from this life.

If we believe in the second coming of Christ, the bodies are of great importance. The bodies laid in the ground face the East waiting to respond promptly to the calling of Christ, the Sun of righteousness, at His second glorious coming. They wait to be reunited with their souls so, as complete men again, body and soul, they will enter into the Kingdom of heaven.

Today’s society however, has a different agenda. Corrupted by atheism and pagan beliefs, a significant part of the population has stopped believing in a personal God. A recent national survey published in Dallas Morning News (June 24th 2008) reveals that 30 percent of the interviewed population, including many Christians, believe in an impersonal God, an energy, a force, anything but a person. Many people today also don’t believe in afterlife, so for them death is the end of the line, a point of no return. Bodies are therefore just a useless reminiscence of what once man was, nothing more. Cremation therefore comes just as a practical way of disposing of dead and useless organic matter.

For us, Orthodox Christians however, death is not the end but is a new beginning. In all funeral Orthodox services we never use the term dead, but rather passed unto the Lord. The saints are commemorated not on their birth date, but on the date of their death, the moment when their earthly endeavors were accepted into the kingdom of heaven. If we die with Christ, we believe we will be resurrected with Him, so death does not frighten us.

Cremation is nothing else but a willful desecration of God’s creation, a falling from grace, a rejection of a personal God that Himself took the same human body we are so quick to destroy. This is why the Church refuses a proper burial and memorial services to the people that have chosen to be cremated. It is not a punishment, but a sad recognition of a person cutting his or her ties with the Body of Christ.

Committing the bodies to the ground according to our tradition is in itself a declaration of faith. It is a belief in an incarnate God, it is belief in the Resurrection and in the Kingdom to come. Amin.

Parking in the Priest’s Spot or What do We do When no One is Watching?

We tend to wear a social mask in the presence of others: a pious mask at Church, a…