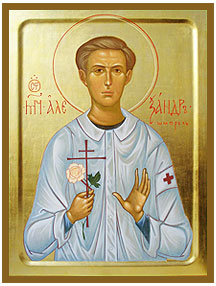 Seventy years ago, Alexander Schmorell was executed by the Nazis in Munich; he was canonized by the Russian Orthodox Church Outside of Russia in February 2012 as a martyr. Schmorell inspired a student resistance movement known as “White Rose.”

The service began at the cathedral of the German Diocese. After the Gospel reading, the clergymen and laity headed on a procession of the cross to the tomb of Martyr Alexander, found in the cemetery adjoining the cathedral. Divine Liturgy continued at his tomb. An altar table was set up over his earth-bound relics.

On the way to the grave of the saint, there were special supplications intoned in German on the suffering Christians in Syria and for His Eminence Metropolitan Paul (brother of Patriarch John X of Antioch), who is currently imprisoned.

“Russian memorial churches in Germany,” noted Archbishop Mark in his sermon, “and the blood bonds of the related dynasties of the Russian and German empires, bear witness to the closeness of the Russian and German peoples. But in the 20 th century, cruelty and bloodshed were introduced into this bond. Martyr Alexander, who had both German and Russian blood, ascended through Christ above the divisions of nationality. As a Christian, he courageously denounced falsehood. The Lord blessed him to receive His Body and Blood before his martyric death. Metropolitan Alexander (Lovchy), before his death, administered Holy Communion to Alexander, who was a member of the Orthodox parish in Munich, and he buried him in the presence of his parents in a small family circle. Now, for the first time, the Mystery of the Body and Blood of Christ is performed over the relics of St Alexander the Martyr for the first time.”

Vladyka Mark noted the great role in the life of St Alexander in preserving the Orthodox faith. He explained the important work he had done with children and youth in instilling Orthodoxy in them. It was therefore significant that a children’s choir sang at the service, and among the many communicants there were a large number of children.

Bavarian television broadcast the divine service. After Liturgy, the cathedral hosted a reception, at which the nephew of St Alexander was present, as well as descendants and other survivors of the members of White Rose. That evening, after all-night vigil, Archbishop Mark and a few parish members attended a memorial concert for St Alexander and the White Rose movement’s supporter, Professor Kurt Huber. The event was held at Munich University’s Ludwig Maximilian Hall.