The Christian Code of Conduct

I once read a bumper sticker that really started me thinking, this bumper sticker asked a simple question: “If you were on trial for being a Christian, would there be enough evidence to convict you?” Here’s a story that I came across that ties in perfectly with the bumper sticker I just told you about.
| 27 June 2010 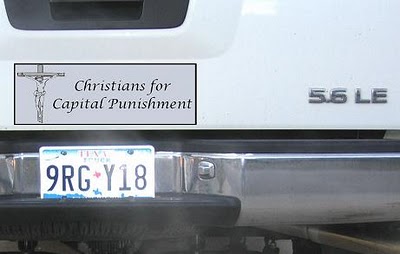 I once read a bumper sticker that really started me thinking, this bumper sticker asked a simple question: “If you were on trial for being a Christian, would there be enough evidence to convict you?” Here’s a story that I came across that ties in perfectly with the bumper sticker I just told you about.

A very stressed-out woman was tailgating a man driving down a busy street. Suddenly, the light turned yellow, just in front of him. He did the right thing, stopping at the crosswalk, even though he could have beaten the red light by accelerating through the intersection.

The tailgating woman hit the roof, and the horn, screaming in frustration as she missed her chance to get through the intersection with him.  As she was still in mid-rant, she heard a tap on her window and looked up into the face of a very serious police officer.  The officer ordered her to exit her car with her hands up.  He took her to the police station where she was searched, fingerprinted, photographed, and placed in a cell.

After a couple of hours, a policeman approached the cell and opened the door.  She was escorted back to the booking desk where the arresting officer was waiting with her personal effects.

He said, “I’m very sorry for this mistake. You see; I pulled up behind your car while you were blowing your horn, flipping the guy off in front of you, and cussing a blue streak at him.  I noticed the ‘Choose Life’ license plate holder, the ‘What Would Jesus Do?’ bumper sticker, the ‘Follow Me to Sunday School’ bumper sticker and the chrome-plated Christian fish emblem on the trunk. Naturally, I assumed you had stolen the car.”

While I can’t confirm if this story is true, it just goes to show that someone else has thought about the same issue that’s been bothering me for several years now.  I have witnessed a large increase in people professing to be Christians and at the very same time these same people display few or none of the characteristics of a Christian. How many people have you encountered on the highways with Christian symbols and bumper stickers on their cars that drive like angry devils?  How ironic it is to have a Christian bumper sticker, or symbol on your car and drive like you have no regard at all for the life of your fellow human beings!  What this amounts to is false advertising in the eyes of God.

I’m not saying that these symbols and bumper stickers are wrong; I’m saying that they’re hypocritical if you display them then act the opposite of what you’re advertising about yourself.  We find out how Jesus Christ feels about this type of hypocrite in Matthew 23:27 “Woe to you, Scribes and Pharisees, hypocrites! For you are like white washed tombs, which indeed appear beautiful on the outside, but within are filled with dead men’s bones, and all uncleanness.”  Be assured that Jesus Christ still feels the same way about people who profess to be Christians, and display all the signs of being Christians, but don’t bother to follow His precepts and teachings.

When we become Christians, we take the yoke of Christianity upon ourselves.  This is a sacred responsibility, but one that we must fully embrace and put into practice if we are to be counted as true Christians.  “Take My yoke upon you, and learn of Me; for I am meek and lowly in heart: and you shall find rest for your souls.  For My yoke is easy, and my burden is light.”  Matthew 11:29-30. We read in the Gospel about ten lepers that were cleansed by Jesus and of the ten only one of them returned to thank Jesus for curing him.

Unfortunately, we live in a “me first” world, and from the example of the ten lepers above, not much has changed since the time Jesus Christ walked on the earth. Imagine being instantly cured from a disease as horrible as leprosy and being so self-absorbed that it never occurs to you to thank the one that made the miracle possible.  It required almost no effort for the Samaritan to offer thanks to Jesus for being cured, so you see, His yoke is indeed light and easy to bear.  We must give thanks to the Lord for all of our blessings; a thankful heart is one of the characteristics of a true Christian.  We should also show gratitude to others when they show us kindness and love.

Every Sunday in the Divine Liturgy we sing the Beatitudes, in these you will find the yoke of Christianity and what Jesus Christ expects of us as Christians.  It’s the Christian code of conduct.  These beautiful words were so important to St. John Chrysostom and the early Church that they incorporated them into the Divine Liturgy, so that the faithful would be reminded every Sunday how to be a true follower of Jesus Christ.  The Sermon on the Mount that follows the Beatitudes in Matthew Chapter 5 shows us clearly how to apply this Christian code of conduct in our everyday live.

Could someone be “meek, or merciful, or pure in heart, or a peacemaker, and make rude and obscene gestures, utter curses, and endanger their own lives and the lives of others on the road and not be in violation of the Christian code of conduct?  The answer is “no”.  Now we must also turn our attention to our own reaction as well.  Do we respond in kind?  Or do we live by the Christian code of conduct and stay faithful to the Beatitudes?  That’s a choice that we must all make, fortunately, Eastern Orthodox Christians are well practiced in this Christian code of conduct.  You can’t make someone follow the Christian faith and teachings; they must voluntarily follow them on their own.  Keep in mind, you will only be held responsible for your reaction, so reactions are just as important as actions.

I vividly remember a conversation I had several years ago with a loudly, self-professed Christian woman who had two prominent bumper stickers displayed proudly on her car.  One of them read, “Abortion, stops a beating heart!”  The other one read, “Always choose life!”  This woman was complaining to me about new rules at the prison concerning witnesses to executions.  Knowing her avid pro-life stance I made a totally wrong assumption and asked, “Are they not allowing peaceful protesters at executions anymore?”  She responded indignantly, “I don’t want to protest the execution, I want to be a witness to it.  This man deserves to die and I want to watch him die!”  Truly, actions speak louder than bumper stickers!

Remember, bumper stickers and Christian emblems are not reliable methods for identifying Christians.  The surest way to spot a true Christian is through their actions.