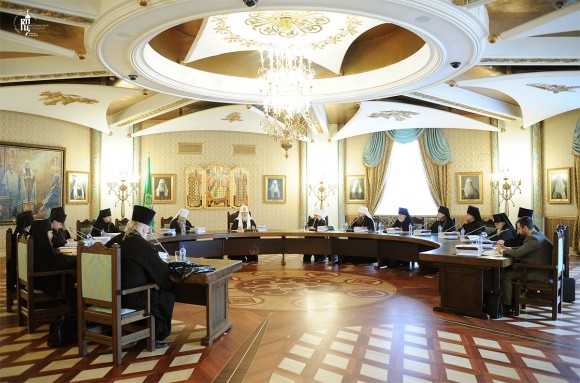 The highest council of the Russian Orthodox Church has published an official statement regarding the decision of Moscow’s Khamovnichesky District Court about the disorder in the Cathedral of Christ the Savior.

The Russian Orthodox Church considers it essential to clarify once again her position with regard to the blasphemous act committed in the Cathedral of Christ the Savior, and likewise regarding the decision  rendered upon it.

While we acknowledge the necessity of a corresponding reaction from the state, we must call attention to the fact that the judicial evaluation of this act falls outside of the sphere of competency of the ecclesiastical hierarchy. The determination of measures of prevention and of punishment belong entirely to the prerogative of the secular court. The Church does not possess the leverage of power necessary to implement right judgement, and does not strive to possess it. Therefore we shall not examine what falls out from political or aesthetical points of view. The pastoral duty of the Church is to render a moral evaluation of the events that have taken place.

That which has taken place is blasphemous and sacreligous. It is a conscious and intentional offense against holy things, the manifestation of a crude enmity towards millions of people and their feelings. It is therefore entirely impossible to agree with the attempts to present what has happened as a prayer, albeit in an entirely non-traditional form. Regretably, such attempts have disoriented many people, including certain members of the Church, who remain ignorant concerning the blashpemous and nasty words that were pronounced on the amvon of the Cathedral of Christ the Savior. The disorder in the temple was a continuation of some deeply immoral public actions that had been previously committed by these same persons and their associates, which actions have gone unpunished.

Blasphemy is a grave sin. An Orthodox Christian may neither participate in blasphemy, nor approve of it, nor support it directly or indirectly.

There is a difference between sins against man and sins against God. If a Christian find himself to have personally received offense, he is called to forgive the one who has sinned against him. But the forgiveness of one who sins against God is not possible without the sincere repentance of the one who has sinned against Him. We read in the Gospel how Christ, while he forgave those who encroached upon Him as a man, at the same time warned against the possibiity of sin against the Holy Spirit: “But whoever sins against the Holy Spirit will not have forgiveness unto the age, but an eternal judgement is attributed to him.” (Mark 3.29) Blasphemy is the chief distinction of an enemy of God, as it is written in Revelations: “And he opened his mouth to blaspheme against God, to blaspheme His name, and His dwelling, and those who dwell in heaven.” (Revelation 13.6).

Were the Church to affect the forgiveness before God of one who has not fallen down in repentance before Him for his blasphemous deeds, this would be the usurpation of a power that is not given to Her: “If a man sin against a man, then one can pray to God for Him. But if a man sin against the Lord, who will be an intercessor for Him?” (I Kings 2.25) Unrepentant sinners are given over to the judgement of God: “Vengeance is mine. I will repay, says the Lord.” (Dueteronomy 32.25; Romans 12.19)

Disorders in churches, desecration of national holy things and declarations of hatred toward the Church are well known in history. Such actions have always been the characteristic sign of authorities such as have brought neither peace, nor benefit, nor freedom to the people. During the twentieth century, anti-religious hatred ended the lives of millions of people, just as ethnic hatred did. Our people were put to the test both by militant atheism and fascist aggression. This taught us a tragic lesson, which formed in us a special sensitivity to greivances against religious and national feelings. Therefore, in our society, any revival of enmity and hatred against the religious and national soil always brings with it the threat of destructive shocks.

The preservation of the foundations of society is impossible without reverence toward the memory of those who died for their fatherland. These blasphemous actions, which took place in a temple that was erected to the memory of the Russian soldiers of the war of 1812, are especially provocative during the period of the bicentennial celebration of the struggle of those soldiers. The supression of outrages against the feelings of believers, of acts of blasphemy against religious sacred things and of dishonour towards cultural monuments — this is the duty of the government, honored by its citizens. The establishment of a juridical precedent should discourage the repetition of such actions in the future.

Without exposing doubt regarding the appropriateness of the judicial decision, we address the state authority with a request that they manifest mercy within the bounds of law toward the defendents, in hope that they will refrain from the repetition of blasphemous acts.

The Church thanks all those who have supported her, who have condemned the sacrilege, and who has voiced peaceful protests against it. We also consider as natural the expression of pity for those who are being detained, which has proceeded likewise from children of the Church and from those who are outside of Her. It is necessary to distinguish the sin from the sinner, condemning the former and hoping for the repentance of the latter. God is always seeking the salvation of sinners and calling them to repentance. Thus the Church also strives toward the pacification and healing of those wounds which have been brought about by the manifestations of blasphemy and enmity.

Addressing the people, whose religious and national feelings have been deeply outraged both by the blasphemous act itself and by the subsequent campaign of propaganda, the Church calls on them to refrain from any act of revenge, from any lawless act, and especially from any acts of violence. At the same time, we bless any peaceful political activities which are directed toward the protection of the Orthodox people and of their holy things from enmity and blasphemy.

We ask all of the faithful children of the Russian Orthodox Church to maintain a peaceful spirit and a prayerful attitude before God.