The Diary of Tanya Savicheva

Twelve-year old Tanya Savicheva started her diary just before Anne Frank. They were of almost the same age and wrote about the same things – about the horrors of fascism. And, again, both these girls died without seeing victory day – Tanya died in July of 1944 and Anne in March of 1945. “The Diary of Anne Frank” was published all over the world and told the author’s story to many people. “The Diary of Tanya Savicheva” was not published at all – it contains only seven scary notes about the deaths of her family members in Leningrad at the time of the Blockade. This small notebook was presented at the Nuremberg trials as a document condemning the terrors of fascism.
| 28 June 2007 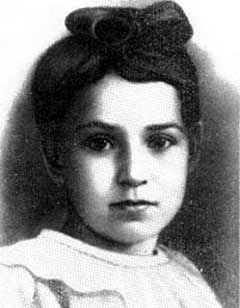 Twelve-year
old Tanya Savicheva started her diary just before Anne Frank. They were of
almost the same age and wrote about the same things – about the horrors of
fascism. And, again, both these girls died without seeing victory day – Tanya
died in July of 1944 and Anne in March of 1945. «The Diary of Anne Frank» was
published all over the world and told the author’s story to many people. «The
Diary of Tanya Savicheva» was not published at all – it contains only seven
scary notes about the deaths of her family members in Leningrad at the time of
the Blockade. This small notebook was presented at the Nuremberg trials as a
document condemning the terrors of fascism.

Today «The Diary of Tanya Savicheva» is in the museum of
history of Leningrad (now St. Petersburg ) and a copy is at the Piskarev cemetery
where 570 thousand people who died in Leningrad during the 900-day blockade
rest (1941-1943). 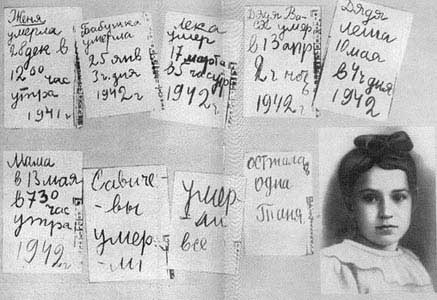 The child’s hand,
losing strength quickly due to extreme hunger, wrote short words and wrote them
unevenly. The delicate soul of the child was paralyzed by extreme suffering and
was unable to feel anymore. Tanya just wrote down facts that surrounded her –
tragic visits of death to her home.

…She was the daughter of a baker and a
seamstress, the youngest in the family, beloved by all. She had big gray eyes,
long blonde bangs and wore a little sailor suit. Her bright, ringing voice
showed lots of promise in terms of singing.

In fact, the whole
Savichev family was gifted musically. The mother, Irina Ignatievna, even
created a small family ensemble: two brothers, Leka and Misha, played the
guitar, mandolin and banjo, Tanya sang, and the rest were the
choir.

The father, Nikolai Rodionovich, died young and so
Irina Ignatievna had to go out of her way to support a family of five. As a
seamstress of the Leningrad house of fashion, she was popular and made good
money for the times. Beautiful examples of her work – curtains, napkins,
tablecloths, decorated the house.

Tanya also learned to sew at an early age. What she loved
most was to sew flowers….

The summer of 1941, the Savichevs
were going to spend a village close to Gdov, by lake Chudskoye . But only Misha
left for the village. The morning of the 22nd of June,
which brought the war, changed all plans. The family decided to stay in
Leningrad , to be close together and to help the front in any way they can. The
mother sewed uniforms for the soldiers. Leka, because of his bad vision, was
not drafted and worked at a factory instead while his sisters Zhenya and Nina
worked at a factory sharpening mine bodies as well as strengthening city
defenses. 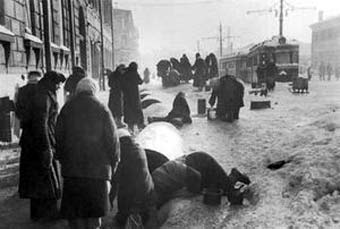 Tanya
also worked. She helped the others to dig trenches. But the ring of the
Blockade that surrounded Leningrad still became tighter and tighter. As Hitler
stated in his plans: « Leningrad will be strangled by hunger and leveled of to
the ground». One day, Nina did not come back from work. That same day, there
was a big bombardment and everyone was worried about her. But as time passed
and it became apparent that Nina was not going to come back, the mother – Irina
– gave her daughter Tanya a small notebook in memory of her sister Nina. This
notebook was where Tanya later started her diary.

Zhenya, Tanya’s other sister, died at the factory. She
worked two shifts in a row and after that also gave blood. She just didn’t have
enough strength. Soon the grandmother of the family was sent to the Piskarev
cemetery – her heart burst. The «History of the Admiralteyskiy factory» also
contains the following lines: «Leonid Savichev always worked very diligently
even though he was very thin and worn out. One day he didn’t come to the
factory. It became known that he died the previous day «.

More and more often Tanya opened her diary – one after
another her beloved relatives left her and finally even her mother. «All the
Savichevs died. Only Tanya is left».

Tanya never found out
that not all the Savichevs died. Her sister Nina was saved and transported away
from the front line. In 1945, she returned to her home city, to her house.
There, amidst bare walls and complete ruin, she found Tanya’s notebook. Tanya’s
brother Misha also survived after suffering severe injuries at the war.

Tanya herself was discovered by special nursing brigades who
went around the houses of Leningrad . She was barely alive. Along with about
140 children who were in a similar state, she was transported to Gorkovskaya
region, to a village called Shatki. The villagers gave the children what they
could and tried to make them feel better. Many of the children did get better
and were able to stand and walk again, finally. But Tanya could not. Doctors
battled for her life for two years, but could not do anything against the
deadly processes that began in her body. Tanya’s arms and legs shook, she had
horrible pains in her head. Tanya died on the 1st of
July 1944. She was buried at the village cemetery.

Tanya
Savicheva was born on the 25th of January, on the day of
St. Tatiana. The members of the Savichev family who survived always get
together at the table and sing «The Ballad of Tanya Savicheva». This song was
first sung at the concert of Edith Piaff. «Tanya, Tanya, your name is like the
warning bell in all languages…»

The heart cannot
cease to remember. Otherwise, we will loose our roots, our past. And without
the past there is no future.