At one time no Christian blinked at the idea that pagans should be proselytised or that those of any other faith or none should come to know Christ. Has this changed? If it has then the Church (the fullness of which is the Orthodox Church) has forsaken Christ's Commission:- "Go therefore and make disciples of all the nations, baptising them in the name of the Father and of the Son and of the Holy Spirit." (Matthew 28:19) I cannot believe that we have forsaken that teaching, or at least, I hope not!
Archpriest Gregory Hallam | 21 September 2010 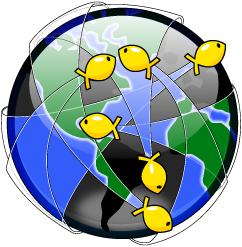 In the first case I refer of course to “evangelism.”  This has become a very difficult word to use in polite Christian circles today.  We Orthodox, sadly, may have very confused notions about “evangelism” regarding it as synonymous with that other great unmentionable, “proselytism.”  When words have become debased in common usage, it is often helpful to turn to the dictionary for a more unbiased definition:-

“Evangelism” – preaching of the gospel
“Gospel” – etymology: “godpsel” (Old English: good news)*
“Proselytism” – (from “proselyte”) – convert from one opinion, creed or party to another
*an exact translation from the Greek “evangelion” = good news
(source: The Concise Oxford Dictionary)

According to these definitions, “Evangelism” is a word with which the Orthodox should be entirely comfortable.  Is the gospel not to be preached?  Does not the Liturgy itself bid us to pray for “evangelists”?  How the preaching the gospel is accomplished, however, is an entirely different matter and to this question we shall return shortly.

As to “proselytism”; well, notwithstanding the habitual response of the Orthodox (“we don’t proselytise”), this also is a word with which we should have no problems.  For example, regarding those whose “opinion, creed or party” is not Orthodox Christian, should we not work for their salvation by prayer, faith and good works?  If we cannot agree on that then presumably there are some Orthodox who really don’t mind if others perish in heresy or unbelief.  Is that consistent with our faith in God who “desires that all men should be saved and come to a knowledge of the truth?” (1 Timothy 2:4).  At one time no Christian blinked at the idea that pagans should be proselytised or that those of any other faith or none should come to know Christ.  Has this changed?  If it has then the Church (the fullness of which is the Orthodox Church) has forsaken Christ’s Commission:- “Go therefore and make disciples of all the nations, baptising them in the name of the Father and of the Son and of the Holy Spirit.” (Matthew 28:19)  I cannot believe that we have forsaken that teaching, or at least, I hope not!

What then is the difference between “evangelism” and “proselytism”? Personally I don’t think that there is much fundamental difference, except perhaps in that “evangelism” is a proclamation of the gospel and “proselytism” is a focussed commending of that gospel to individuals and groups. We now turn to the question of HOW we Orthodox evangelise and proselytise.

It is commonly quoted today in the Church whenever this issue is raised that St. Seraphim of Sarov’s teaching exclusively and only applies.  He said, you will recall:- “Acquire a peaceful spirit, and around you thousands will be saved.”  Now, no one can disagree with this.  It must come first.  If we do not have the Holy Spirit, if we do not know Christ in all humility and gentleness, then we should keep our mouths firmly shut to all save our confessor before whom we should repent until we are cleansed and filled with the Holy Spirit.  However, to claim that all has been said when this teaching has been followed is just plain false.  A selfish spirituality in which we keep the knowledge of God to ourselves and do not share it with others will soon corrupt itself from within as the heart becomes fearful, withdrawn and cold.  We should rather be like the Prophet Jeremiah: “Then I said, ‘ I will not make mention of Him, nor speak anymore in His name but His word was in my heart like a burning fire shut up in my bones I was weary of holding it back, and I could not.'” (Jeremiah 20:9)

The falsity of wordless evangelism is also exposed by the practice of the Church.  Aside from all the ancient Enlighteners whom we commemorate, in more recent times there have been many Orthodox evangelists who have been quite open about preaching the gospel to any who will hear in any environment.  Consider the New Martyr St. Kosmas the Aetolian, Equal-to-the-Apostles (1714 – 1779) who went about Greece preaching the gospel from village to village in the closing decades of the Ottoman Empire.  Metropolitan Kallistos has called this saint the “John Wesley” of the Orthodox Church, (in fact John Wesley was his contemporary).  Or what about St. Nicholas of Japan (1836 – 1912) whom God used to establish the Japanese Orthodox Church? St. Nicholas even sent out his Japanese missionaries in pairs to witness to Christ and taught neophytes in catechetical groups led and run by newly converted Japanese believers, (much again like the early Methodists with their “classes.”)  Then more recently still there is Hieromonk Cosmas, Apostle to Zaire (from Grigoriou Monastery on the Holy Mountain: 1942 – 1989).  He exemplifies the long term nature of our commitments and centredness on God when it comes to evangelisation.  I close with a quotation from this modern day Orthodox evangelist for it neatly summarises our Orthodox way of doing things:-

“The missionary is free and when he is open to the grace of God, the Holy Spirit will speak riches in his heart and indicate to him what to do, gradually and in correspondence to the development of the work. Let us leave room for prayer to act without rushing the situation with narrow logic, absolute measures or the assessments of critics at each stage.”

So we should not be embarrassed or dismissive about either the “E” word” or the “P” Word.  There are ample precedents for the Orthodox engaging in both evangelism and proselytism.  Let us just make sure though that we really are doing it in the Orthodox Way!