The Feast of Palms. Lazarus Saturday and Palm Sunday

The liturgy of the Church is more than meditation or praise concerning past events. It communicates to us the eternal presence and power of the events being celebrated and makes us participants in those events. Thus the services of Lazarus Saturday and Palm Sunday bring us to our own moment of life and death and entrance into the Kingdom of God : a Kingdom not of this world, a Kingdom accessible in the Church through repentance and baptism.
Priest Paul Lazor | 19 April 2008 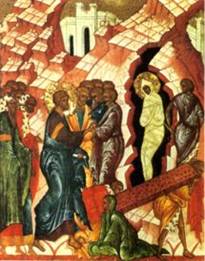 Visible triumphs are few in the earthly life of our Lord Jesus Christ. He preached a kingdom “not of this world.” At His nativity in the flesh there wasno room at the inn.” For nearly thirty years, while He grew “in wisdom and in stature, and in favor with God and man” (Luke 2:52 ), He lived in obscurity as “the son of Mary.” When He appeared from Nazareth to begin His public ministry, one of the first to hear of Him asked: “Can   anything good come out of Nazareth ?” (John 1:46). In the end He was crucified between two thieves and laid to rest in the tomb of another man.

Two brief days stand out as sharp exceptions to the above—days of clearly observable triumph. These days are known in the Church today as Lazarus Saturday and Palm Sunday. Together they form a unified liturgical cycle which serves as the passage from the forty days of Great Lent to Holy Week. They are the unique and paradoxical days before the Lord’s Passion. They are days of visible, earthly triumph, of resurrectional and messianic joy in which Christ Himself is a deliberate and active

participant. At the same time they are days which point beyond themselves to an ultimate victory and final kingship which Christ will attain not by raising one dead man or entering a particular city, but by His own imminent suffering, death and resurrection.

By raising Lazarus from the dead before Thy Passion,

Like the children with the palms of victory, we cry out to Thee,

O Vanquisher of Death: Hosanna in the highest!

Blessed is He that comes in the name of the Lord!

(Troparion of the Feast, sung on both Lazarus Saturday and Palm Sunday) 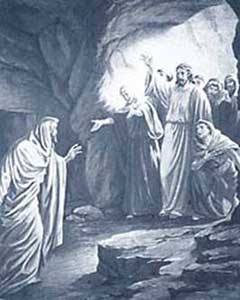 In a carefully detailed narrative the Gospel relates how Christ, six days before His own death, and with particular mindfulness of the people “standing by, that they may believe that thou didst send me” (John 11:42), went to His dead friend Lazarus at Bethany outside of Jerusalem . He was aware of the approaching death of Lazarus but deliberately delayed His coming, saying to His disciples at the news of His friend’s death: “For your sake I am glad that I was not there, so that you may believe” (John 11:14).

When Jesus arrived at Bethany , Lazarus was already dead four days. This fact is repeatedly emphasized by the Gospel narrative and the liturgical hymns of the feast. The four-day burial underscores the horrible reality of death. Man, created by God in His own image and likeness, is a spiritual-material being, a unity of soul and body. Death is destruction; it is the separation of soul and body. The soul without the body is a ghost, as one Orthodox theologian puts it, and the body without the soul is a decaying corpse. “I weep and I wail, when I think upon death, and behold our beauty, fashioned after the image of God, lying in the tomb dishonored, disfigured, bereft of form.” This is a hymn of St. John of Damascus sung at the Church’s burial services. This “mystery” of death is the inevitable fate of man fallen from God and blinded by his own prideful pursuits.

With epic simplicity the Gospel records that, on coming to the scene of the horrible end of His friend, “Jesus wept” (John 11:35). At this moment Lazarus, the friend of Christ, stands for all men, and Bethany is the mystical center of the world. Jesus wept as He saw the “very good” creation and its king, man, “made through Him” (John 1:3) to be filled with joy, life and light, now a burial ground in which man is sealed up in a tomb outside the city, removed from the fullness of life for which he was created, and decomposing in darkness, despair and death. Again as the Gospel says, the people were hesitant to open the tomb, for “by this time there will be an odor, for he has been dead four days” (John 11:39) .

When the stone was removed from the tomb, Jesus prayed to His Father and then cried with a loud voice: “Lazarus, come out.” The icon of the feast shows the particular moment when Lazarus appears at the entrance to the tomb. He is still wrapped in his grave clothes and his friends, who are holding their noses because of the stench of his decaying body, must unwrap him. In everything stress is laid on the audible, the visible and the tangible. Christ presents the world with this observable fact: on the eve of His own suffering and death He raises a man dead four days! The people were astonished. Many immediately believed on Jesus and a great crowd began to assemble around Him as the news of the raising of Lazarus spread. The regal entry into Jerusalem followed. 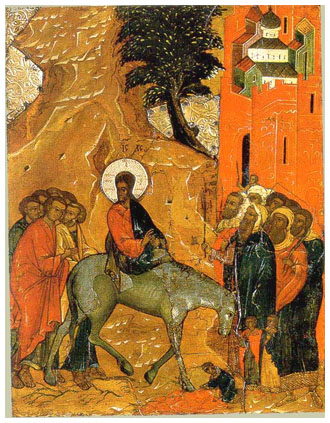 Palm Sunday is the celebration of the triumphant entrance of Christ into the royal city of Jerusalem . He rode on a colt for which He Himself had sent, and He permitted the people to hail Him publicly as a king. A large crowd met Him in a manner befitting royalty, waving palm branches and placing their garments in His path. They greeted Him with these words: “Hosanna! Blessed is he who comes in the name of the Lord, even the King of Israel! (John 12:13).

This day together with the raising of Lazarus are signs pointing beyond themselves to the mighty deeds and events which consummate Christ’s earthly ministry. The time of fulfillment was at hand. Christ’s raising of Lazarus points to the destruction of death and the joy of resurrection which will be accessible to all through His own death and resurrection. His entrance into Jerusalem is a fulfillment of the messianic prophecies about the king who will enter his holy city to establish a final kingdom. “Behold, your king is coming to you, humble, and mounted on an ass, and on a colt, the foal of an ass” (Zech 9:9).

Finally, the events of these triumphant two days are but the passage to Holy Week: the “hour” of suffering and death for which Christ came. Thus the triumph in an earthly sense is extremely short-lived. Jesus enters openly into the midst of His enemies, publicly saying and doing those things which most enrage them. The people themselves will soon reject Him. They misread His brief earthly triumph as a sign of something else: His emergence as a political messiah who will lead them to the glories of an earthly kingdom.

The liturgy of the Church is more than meditation or praise concerning past events. It communicates to us the eternal presence and power of the events being celebrated and makes us participants in those events. Thus the services of Lazarus Saturday and Palm Sunday bring us to our own moment of life and death and entrance into the Kingdom of God : a Kingdom not of this world, a Kingdom accessible in the Church through repentance and baptism.

Lazarus Saturday is a unique day: on a Saturday a Matins and Divine Liturgy bearing the basic marks of festal, resurrectional services, normally proper to Sundays, are celebrated. Even the baptismal hymn is sung at the Liturgy instead of Holy God: “As many as have been baptized into Christ, have put on Christ.”

On Palm Sunday palm and willow branches are blessed in the Church. We take them in order to raise them up and greet the King and Ruler of our life: Jesus Christ. We take them in order to reaffirm our baptismal pledges. As the One who raised Lazarus and entered Jerusalem to go to His voluntary Passion stands in our midst, we are faced with the same question addressed to us at baptism: “Do you accept Christ?” We give our answer by daring to take the branch and raise it up: “I accept Him as King and God!”

Thus, on the eve of Christ’s Passion, in the celebration of the joyful cycle of the triumphant days of Lazarus Saturday and Palm Sunday, we reunite ourselves to Christ, affirm His Lordship over the totality of our life and express our readiness to follow Him to His Kingdom:

…that I may know him and the power of his resurrection, and may share his sufferings, becoming like him in his death, that if possible I may attain the resurrection from the dead. (Philippians 3:10-11) .