The Feast of Transfiguration of Our Lord

Besides the fundamental meaning which the event of the Transfiguration has in the context of the life and mission of Christ, and in addition to the theme of the glory of God which is revealed in all of its divine splendor in the face of the Savior, the presence of Moses and Elijah is also of great significance for the understanding and celebration of the feast.
| 17 August 2008

As we know, the Transfiguration of Christ is one of the central events recorded in the gospels. Immediately after our Lord was recognized by his apostles as “the Christ [Messiah], the Son of the Living God,” he told them that “he must go up to Jerusalem and suffer many things … and be killed and on the third day be raised”(Mt 16). The announcement of Christ’s approaching passion and death was met with indignation by the disciples. And then, after rebuking them, the Lord took Peter, James, and John “up to a high mountain” — by tradition mount Tabor — and was “transfigured before them.”

His face shone like the sun, and his garments became white as snow and behold, there appeared to them Moses and Elijah, talking with him. And Peter said to Jesus, “Lord, it is well that we are here; if you wish I will make three booths here, one for you and one for Moses and one for Elijah. He was still speaking when lo, a bright cloud overshadowed them, and a voice from the cloud said, “This is my Beloved Son, with whom I am well pleased; listen to him.” When the disciples heard this, they fell on their faces with awe. But Jesus came and touched them, saying, “Rise, and have no fear.” And when they lifted up their eyes, they saw no one but Jesus only. And as they were coming down the mountain, Jesus commanded them, “Tell no one the vision, until the Son of Man is raised from the dead” (Mt 17:1-92, see also Mk 9:1-9; Lk 9:28-36; 2 Peter 1:16-18). 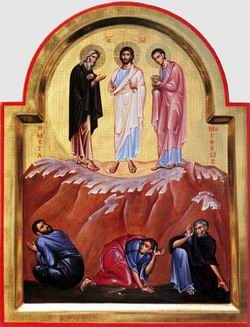 The Jewish Festival of Tents was a feast of the dwelling of God with men, referring to their journey from Egypt to the promised-land where they always lived in tents whenever they camped. The Tabernacle, the house of their Lord, was with them always at the centre of their camp. The transfiguration of Christ reveals how this dwelling takes place in and through the Messiah, the Son of God in human flesh. Christ’s transfiguration took place at the time of the Festival of Tents, and that the celebration of the event in the Christian Church became a feast in a way similar to the feasts of Passover and Pentecost.

In the Transfiguration, the apostles see the glory of the Kingdom of God present in majesty in the person of Christ. They see that in him, indeed, all the fullness of God was pleased to dwell, that “in him the whole fullness of deity dwells bodily” (Col 1:19, 2:9). They see this before the crucifixion so that in the resurrection they might know who it is who has suffered for them, and what it is that this one, who is God, has prepared for those who love him. This is what the Church celebrates in the feast of the Transfiguration and hence she prays: “Thou wast transfigured on the mount. 0 Christ, our Lord and Savior, revealing Thy glory to Thy disciples as they could bear it. Let Thine everlasting light shine upon us sinners. Through the prayers of the Theotokos, O Giver of Light, glory to Thee. On the mountain wast Thou transfigured, 0 Christ God, and Thy disciples beheld Thy glory as far as they could see it; so that when they would behold Thee crucified, they would understand that Thy suffering was voluntary, and would proclaim to the world that Thou art truly the Radiance of the Father.” – Prayers from the Feast of Transfiguration.

Besides the fundamental meaning which the event of the Transfiguration has in the context of the life and mission of Christ, and in addition to the theme of the glory of God which is revealed in all of its divine splendor in the face of the Savior, the presence of Moses and Elijah is also of great significance for the understanding and celebration of the feast. Many of the hymns refer to these two leading figures of the Old Covenant as do the three scripture readings of Vespers which tell of the manifestation of the glory of God to these holy men.(Ex 24:12-18; 33:11-34:8; 1 Kings 19:3-16). Moses and Elijah, according to the liturgical verses, are not only the greatest figures of the Old Testament who now come to worship the Son of God in glory, they also are not merely two of the holy men to whom God has revealed himself in the pre-figurative theophanies of the Old Covenant of Israel. These two figures actually stand for the Old Testament itself: Moses for the Law and Elijah for the Prophets. And Christ is the fulfillment of both the Law and the Prophets (Mt 5:17). They also stand for the living and dead, for Moses died and his burial place is known, while Elijah was taken alive into heaven in order to appear again to announce the time of God’s salvation in Christ the Messiah. Thus, in appearing with Jesus on the mount of Transfiguration, Moses and Elijah show that the Messiah Savior is here, and that he is the Son of God to whom the Father himself bears witness, the Lord of all creation, of the Old and New Testaments, of the living and the dead. The Transfiguration of Christ in itself is the fulfillment of all of the theophanies and manifestations of God, a fulfillment made perfect and complete in the person of Christ. The Transfiguration of Christ reveals to us our ultimate destiny as Christians, the ultimate destiny of all men and all creation to be transformed and glorified by the majestic splendor of God himself.

The feast of the Transfiguration is celebrated in most of the Orthodox Churches on the sixth of August. In the Gospel, the event of Transfiguration happens before the Death and Resurrection of our Lord. Then why we celebrate the feast after Pentecost at this period, and why particular on 6th August? There are both theological and historical reasons. The theological reason is that, transfiguration is possible only through the sacramental life and witness of the Church in Christ. The Church after Pentecost specially represents the sacramental body of Christ as well as it witnesses Him from generations to generations. The transfiguration and transformation of the Church, as a community of believers, is happening through this processes of witnessing Him in sacramental life. Virgin Mary the Mother of God, the most effective symbol of the Church, been transfigured and transformed to Divine Kingdom as the first and true model for all the Church. This is been celebrated on fifteenth of August.

The historical reason should be that the Romans as well as the Byzantines were having their great summer fest at this time. The summer celebration of the feast, however, has lent itself very well to the theme of transfiguration. Their tradition of blessing of grapes, as well as other fruits and vegetables on this day is the most beautiful and adequate sign of the final transfiguration of all things in Christ. It signifies the ultimate flowering and fruitfulness of all creation in the paradise of God’s unending Kingdom of Life where all will he transformed by the glory of the Lord.

However, the importance of the Feast of Transfiguration should be acknowledged in the Church. Our parishes, Monasteries and other spiritual institutions must celebrate this feast of our Lord in its full meaning and application in the life of our believers. Because, according to the Fathers, it is, undoubtedly, even the for-taste of the kingdom of God.