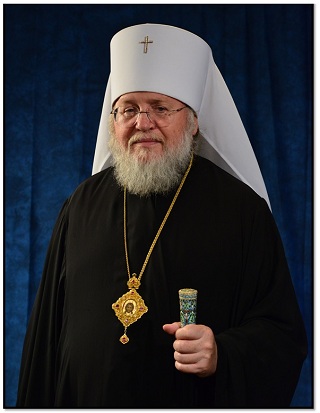 On November 12-14, 2012, His Eminence Metropolitan Hilarion of Eastern America and New York, First Hierarch of the Russian Orthodox Church Outside of Russia, visited Nicaragua. The main goal of the visit was to meet with clergymen and Orthodox faithful in the nation.

After his arrival, at a press conference, His Eminence noted: “I am making my first visit to Nicaragua on church matters, since many Orthodox Christians have settled here. Our parish here is headed by Hieromonk German (Castro). Nicaragua is a very good country, a country of light, and the people in this nation are kind and very attentive, living with great hopes for the future. It is very important that a parish of the Russian Orthodox Church Outside of Russia is opening here. At the present time, there are some 200 Orthodox believers living in Nicaragua. Our parish is located in Camoapa, but another will soon be established in Managua.”

In addition to meetings with clergymen and parishioners, a visit is also planned with Monsignor Leopoldo Brenes, Archbishop of the Roman Catholic Church, and his aide, Monsignor Silvio Jose Baez Ortega. During their meeting they will share opinions on the problems affecting all Christians in Nicaragua.

Commenting on the visit of the First Hierarch to this nation, Mr AA Melik-Shakhnazarov, representative of the Russian agency Rossotrudnichestvo stressed that “it is very important for Orthodox Christians living in Nicaragua. They have new hope that the Church has not forgotten them, and they can turn to her for help in moments of need.”

As he bade farewell to Fr German and his parishioners, His Eminence promised to visit them again next year.

Source: The Russian Orthodox Church Outside of Russia website

Most viewed articles
Metropolitan Hilarion of Eastern America and New York to Be Buried in Jordanville on May 22222
Patriarch Kirill: The Peoples of Russia and Ukraine Have No Interest in the Conflict186
Communion restored between the Serbian Orthodox Church and the Macedonian Orthodox Church – Ohrid Archbishopric133
Metropolitan Hilarion of Eastern America and New York Reposes in the Lord130
What Do We Celebrate at Mid-Pentecost?111
Family Life and Spiritual Warfare75
Celebrating 100 Years with Paschal Joy71
Patriarch of Serbia to Concelebrate with Archbishop Stephen of Ohrid50
Concelebration of Divine Liturgy by the Serbian Patriarch and Archbishop of Ohrid in Belgrade (VIDEO)45
China’s Internet Clampdown Is Step Closer to ‘Cancelling Christianity’40
Most popular authors
Pravmir.com team766
Ioannis Foundoulis111
Archpriest Michael Gillis75
Priest Luke A. Veronis71
Donna Birrell40