The Garments of Salvation

All too often the liturgical garments of the Orthodox Church are simply taken for granted. They are a portion of our ecclesiastical tradition little understood and seldom considered by the laity. We all know what a halo on an icon is and what it represents. Likewise, most of us are at least aware of the complexities and some of the details of our various musical traditions. But I suspect most Orthodox Christians would be hard-pressed to name the diamond-shaped vestment piece that hangs at the priestґs knee (itґs called an "epigonation") or explain the significance.
Krista M. West | 02 July 2009

The first time I stepped into an Orthodox Church the thing I noticed most was the vestments. Sure, the incense smelled great, the icons were beautiful, and the chant was inspiring, but, oh, those vestments! I couldnґt look at the lovely brocades and, to my eye, unusual styles long enough. I longed for someone to answer my questions. What was that trim all around the cape-like thing the priest was wearing? Were there always the same number of crosses on the garment that looked as if it might be a stole? Who made these garments? What did they represent? A number of years and many yards of fabric later this fascination with Orthodox vestments has been transformed into a vocation, for I now work as a professional vestment maker. 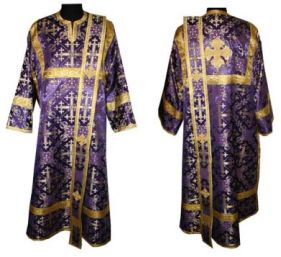 All too often the liturgical garments of the Orthodox Church are simply taken for granted. They are a portion of our ecclesiastical tradition little understood and seldom considered by the laity. We all know what a halo on an icon is and what it represents. Likewise, most of us are at least aware of the complexities and some of the details of our various musical traditions. But I suspect most Orthodox Christians would be hard-pressed to name the diamond-shaped vestment piece that hangs at the priestґs knee (itґs called an “epigonation”) or explain the significance. Yet the vestments of the Church are a beautiful and glorious testament to our tradition and our unchanging faith and as such they are well worth consideration.

It is thought by scholars that our current Orthodox vestments developed from first and second-century Roman secular dress. The particular styles became fixed and traditional in the period of the Byzantine Empire when clergymen were

officials of imperial rank and thus were required by law to wear some sign of their office. It is fascinating to observe how, from this beginning, the various vestments have come to take on symbolic, theological meaning. 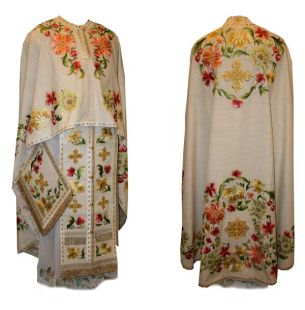 The sticharion, the foundational garment of Orthodox liturgical vesture, has come to symbolize the white baptismal garment of the Christian and today exists in several distinct variations. The priestґs sticharion (also worn by a bishop) is usually made of white material trimmed with galloon (decorative trim) and is worn under the other vestments. (Not all sticharia are white; it is not uncommon to see a priestґs sticharion made out of the same fabric as is used for the lining of the other vestments.) The deaconґs sticharion, the main vestment worn by a deacon, and the altar serverґs sticharion, a simplified version of the deaconґs, are both typically made of a liturgical brocade (a highly ornamented fabric) trimmed with galloon. 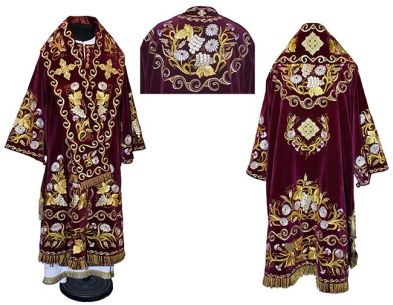 The deaconґs orarion, priestґs epitrachilion, and bishopґs omophorion are all distinctive forms of the stole, what Archimandrite Chrysostomos terms the “universal vestment” in his informative volume, Orthodox Liturgical Dress. The stole is often referred to as the “priestly garment” because it serves as the primary symbol of the hieratic office of the wearer, be he deacon, priest, or bishop. The orarion, epitrachilion, and omophorion traditionally have two banks of fringe at either end and specific numbers of crosses: seven for the epitrachilion (six on the front with a seventh small cross at the center back of the neck, which is kissed by the priest each time he vests), seven as well for the orarion, and three crosses and two to four “badges” or decorative bars on the omophorion.

The phelonion has its origins in an ancient Roman outer garment, a large flowing cloak used for winter wear and traveling. It is easily the most impressive piece in a set of priestґs vestments, being a large, cape-like garment cut away in the front to allow for ease in movement. A large cross or an embroidered icon of Christ adorns the back of the phelonion.

The remainder of a set of priestґs vestments is made up of the cuffs, or epimanikia; the belt, or zone; and the epigonation. The cuffs seem to have developed later than the other vestments (around the sixth century) as a small detail of the Byzantine emperorґs dress which was copied in liturgical garb. It is unclear when the epigonation, often characterized as an award piece, came into use. Today it may serve variously as a symbol of a priestґs theological education, a sign of his authority to hear confession, or an award for meritorious service. The humble zone came into use from the practical need to restrain the free-flowing garments.

Like all the traditions surrounding the Orthodox worship, vestments serve as an embodiment of our theology. Liturgical garments are a highly stylized and antique version of the clothes we all wear every day. In this regard vestments may be viewed as one among the many symbols set before us by the church which manifest Christґs redemption of the material world. When Adam and Eve fell they found it necessary to put on garments in order to hide their nakedness. The Church has taken these lowly garments and transfigured them to such an extent that they are used to glorify and worship God.

The way in which vestments appeal to our very human need to visualize the glory and kingship of our Lord through His priests reflects our theology of the Incarnation of our Creator. Had God the Word not become man, there would be no need to embrace and sanctify the things of man, and consequently no need for glorious vestments. Vestments, like icons, can and do serve as reminders of the beauty and magnificence of our call as Orthodox Christians: to worship God with our whole being-body, mind and soul.

So the next time you enter an Orthodox church, smell the incense, gaze upon the icons, and listen to the chant. Then take a moment to consider the priestґs and deaconґs vestments, the altar covers, the chalice veils, and reflect upon the mystery of salvation which these “fabric icons” represent, a mystery best expressed in a verse from the vesting prayers: “My soul shall rejoice in the Lord, for He hath clothed me with the garment of salvation; as a bridegroom He hath set a crown upon me, and as a bride He hath adorned me with ornament, always now and ever, and unto ages of ages.