There is a part of us that yearns for a Kingdom, because it yearns for a King, for someone strong and personal who is in charge and cares about us. When we grew older perhaps we forgot about the Kingdom. Perhaps it was replaced by a bureaucracy, where it seems that no one is in control or cares. Perhaps it was replaced by dictatorship, as we tried to be our own kings and found ourselves to be tyrants.
| 12 November 2009

“Once upon a time in a faraway kingdom … ” — how many fairy tales start something like this! Did you ever hear a fairy tale set in a democracy?

There is a part of us that yearns for a Kingdom, because it yearns for a King, for someone strong and personal who is in charge and cares about us. When we grew older perhaps we forgot about the Kingdom. Perhaps it was replaced by a bureaucracy, where it seems that no one is in control or cares. Perhaps it was replaced by dictatorship, as we tried to be our own kings and found ourselves to be tyrants.

But there really is a Kingdom, because there really is a King. This Kingdom is not like any other, even in storybooks, although it is the Story that all the good stories about good kings are trying to tell, from Cinderella to King Arthur to Tolkien. This Kingdom is so different from what we usually experience that most of the Gospels are attempts to describe it. It is like a wedding or a banquet. It belongs to the poor, and the “poor in spirit”. It is so wonderful that if a person realized what it is he would give up everything, even his eye or hand for it. The understanding of this Kingdom is hidden from the “wise and prudent” but revealed to babes. 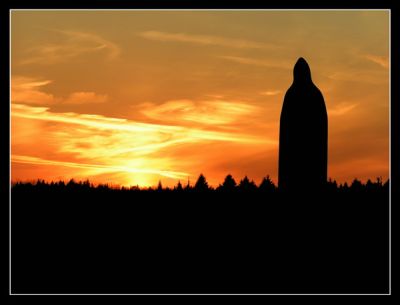 Where is this Kingdom? It is “not of this world” but neither is it far away or only in the future or the past. It is coming with power, and there will be a time when every knee shall bow to its King. But now it is .. at hand”; it is hidden in the world like yeast in a lump of dough, like a little seed which will become a great tree, like a treasure hid in a field. For those who want it badly enough it is already here; “the violent bear it away” (grasp it by force). It is “righteousness and peace and joy in the Holy Spirit.”

Who is this King? He is the hidden King who left His throne to find his Bride, us. He is the Universal King, the hero of all the cosmic tales~ yet He became a specific man, Jesus, born of a specific woman, Mary, in a specific place, Palestine, at a specific time, the first century. He did this because we can only know and love specific persons, not-ideas, and only a specific person can love and die. He is “touched with the feeling of our weakness, for He was in every way tempted as we are, yet did not sin.” He is the Wounded Healer, the lost King who returns, because when He dies it is our flawed selves that He takes to death with Him, and our true selves that He raises resplendent from the Tomb.

How can one find this Kingdom? It is found wherever its King is obeyed, because He forces Himself on no one. He says wherever two or three are gathered in His name He is in their midst, and His Church gathers then to manifest His presence, beginning by pledging allegiance to His Kingdom: Blessed is the Kingdom of the Father and of the Son and of the Holy Spirit. Everything in the Church services is different from what is found in this world: the music, the smell, the images, the robes, the words lift our minds to the Kingdom, where we eat and drink with Him at His Table. The Kingdom is not limited to the visible Church, and we shall know it more perfectly later, but the most reliable and trustworthy place to find the real King is among His designated witnesses whom He has promised that His Spirit will guide into all truth, the Orthodox Church which has existed continuously and without change in the East, the place of His earthly life.

But the door, the ladder to this Kingdom, the Church Fathers insist, is in your heart, because it is in your heart that the King must reign. You must turn away from this world with its cares and pride and emptiness, from your own flawed self with its pretenses and excuses and dishonesty and confusion, and go into your “inner room” which is your heart. There you will find the King who has been waiting to meet you, to whom you can say with the thief who hung beside Him, “Remember me 0 Lord in Thy Kingdom.”