The Holy Fire has descended in the Lord’s Sepulcher 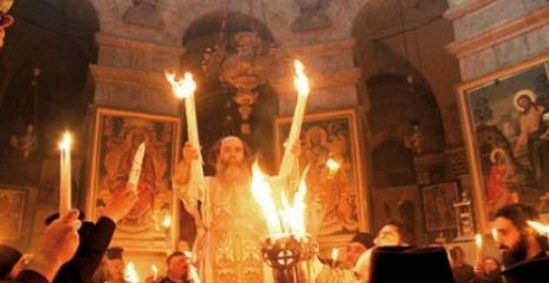 Thousands of people witnessed the great miracle in the Church of the Holy Sepulcher in Jerusalem, as the Holy Fire descended and lit the candles of the faithful, Interfax reported at 14:26 today Jerusalem time. The Holy Fire appeared in the altar as Patriarch Theophilos of Jerusalem prayed, as always miraculously happens on Holy Saturday, the eve of the feast of Christ’s Resurrection—Pascha.

After the flame’s descent, the Patriarch passed it along to the worshippers, who lit their bunches of 33 candles. This number represents the 33 years of Christ’s earthly life.

Pilgrims “washed” their faces and heads with the flame, and as every year, received no burns. The faithful lit their oil lamps with the fire to take it to their homes.

The miracle of the descent of the Holy Fire was preceded by a complex ceremony: The doors of the altar—a small chapel which contains Christ’s tomb—was sealed with a large wax seal as a sign that the inspection has been completed and nothing was found within that would enable the Patriarch to light a candle on his own.

By the time the fire descended, the church was filled to over capacity. RIA Novosti reported that there were about 10,000 in the church and 10,000 more in the courtyard outside it.This included members of the Orthodox Arab population, as well as pilgrims from many different countries. Orthodox Christians from the former Soviet bloc countries, Greece, and Cypress traditionally comprise the majority.

Right after the seal was placed on the Sepulcher the young Orthodox Arabs ran into the church as they do every year, standing on each others’ shoulders and asking the Theotokos and the Lord to send down the fire, shouting, “Our faith is the right faith, our faith is the Orthodox faith!”

Not long before Patriarch Theophilos arrived, the seal was removed from the doors of the Sepulcher, and a large oil lamp and 33 candles were brought in. Then the Patriarch entered the altar, and all waited for the great event.

The Holy Fire will be brought to various Orthodox Churches in Russia, as well as to Bulgaria, Romania, Greece, and other countries.

The Holy Fire was first described by a Russian monk, Daniel, who made a pilgrimage to the Holy Land in the early eighth century. “And when the ninth hour came and they began to sing the entrance hymn, ‘We sing to the Lord’, then suddenly a great cloud came from the east and hung over the open roof of that church, and a light rain fell over the Lord’s Sepulcher and drenched us well who were standing on the Tomb. Then suddenly the Holy Light shone in the Holy Sepulcher: a terrible and bright flash came forth from the Holy Tomb of the Lord,” he wrote.