December 20, 2012 – The Holy Synod of the Ukrainian Orthodox Church met for an extended session with participation of the Synodal institutions’ leaders, at the Kiev-Caves Laura of the Dormition. It was chaired by His Beatitude Vladimir, Metropolitan of Kiev and All Ukraine. 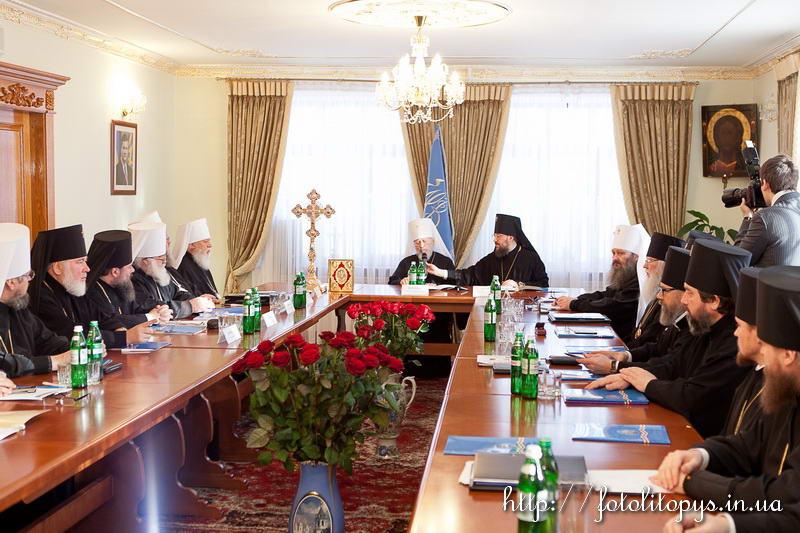 Archbishop Antony of Borispol, chancellor of the Ukrainian Orthodox Church, made a report on the church life in 2012. He thanked leaders of departments and commissions for their work.

Metropolitan Vladimir reported about the hosting of the old Icon of the Shroud of Our Lady from Jerusalem in Ukraine and the arrival to Ukraine of a replica of the old Icon of Our Lady of Vladimir (Vyshgorod), which has been consecrated by His Holiness Kirill, Patriarch of Moscow and All Russia. He expressed gratitude to Patriarch Kirill for the blessing he gave for bringing the Vladimir Icon to Ukraine.

The Holy Synod has detached a Diocese of Feodosia from the Diocese of Simferopol. Metropolitan Platon has been assigned its administrator as he requested and Metropolitan Vladimir proposed after the Holy Synod of the Russian Orthodox Church relieved him of the duties of administrator of the diocese of Argentina and South America in July 2012 so that he could continue his archpastoral ministry in the Ukrainian Orthodox Church at her discretion.

On the basis of the report by Metropolitan Agafangel of Odessa and Izmail, it was agreed to establish a Diocese of Balta detached from the Diocese of Odessa. Archbishop Alexy of Belgorod-Dnestrovsky was appointed Archbishop of Balta and Ananyev.

Metropolitan Sofrony of Cherkassk and Kanev was relieved of the task of monitoring the progress and financing of the construction of a Cathedral of the Resurrection in Kiev and a UOC Religious Education Center.

The Synod also made several decisions concerning the life of dioceses, monasteries and theological schools.