The Impact of Orthodox Theology

This vision of doxological theology is at odds with the standard fourfold division of seminary education in the West, which keeps "Bible," "church history," "theology" and "practical ministry" cordoned off from one another. For the Orthodox, theology is simply commentary upon the saints’ commentary on scripture for the sake of the church’s worship. As the fourth-century Orthodox monastic writer Evagrius of Pontus says, "A theologian is one who prays, and one who prays is a theologian."
user_1289841207 | 25 February 2009

Think of the standard theological debates in Western Christianity: Is conversion a matter of divine grace or human free will? Are theological disputes to be arbitrated by appeals to the Bible or to church tradition? Do the church’s authority and unity cohere in the pope, in a set of bishops, or in assemblies of the faithful?

These sorts of questions expose a traditional line of demarcation from which Catholics and Protestants generally break in opposite directions. Yet in none of these cases do Eastern Orthodox Christians feel obliged to choose sides, That’s a key reason why theologians in the West have recently been looking to Orthodox theology for help in getting beyond their theological impasses.

Orthodoxy has deeply influenced some of the most important Protestant theologians working today. Geoffrey Wainwright, Sarah Coakley, Rowan Williams and John Milbank (from Great Britain); Wolfhart Pannenburg, Jurgen Moltmann and Miroslav VoIf (from central Europe); Robert Jenson, Eugene Rogers and Kathryn Tanner (from the U.S.) — these and many others have avidly turned to Orthodox sources. It is difficult now to do serious theological work without extensive reference to ancient and modern Orthodox sources. 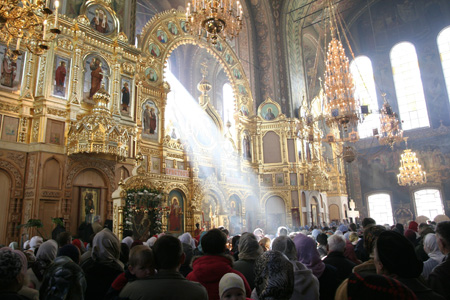 Perhaps the most important dualism never foisted on the Orthodox is that between academic theology and worship. Theology is certainly an intellectual endeavor for the Orthodox, but it is more pronouncedly doxological. Theology is a loving word of praise to the God who first speaks his Word to us in Christ and by the Spirit draws us into the church. Orthodox theology is conducted in the first-person plural — “we,” not an impartial “they,” are drawn to the Father by the Son.

This vision of doxological theology is at odds with the standard fourfold division of seminary education in the West, which keeps “Bible,” “church history,” “theology” and “practical ministry” cordoned off from one another. For the Orthodox, theology is simply commentary upon the saints’ commentary on scripture for the sake of the church’s worship. As the fourth-century Orthodox monastic writer Evagrius of Pontus says, “A theologian is one who prays, and one who prays is a theologian.”

This vision of the church and theology affects Orthodox interaction with Western Christians at a basic level. An advertisement for an Orthodox church in a rural American town full of self-proclaimed Bible-believing churches invites people to come to “a church that knows the Bible because it wrote the Bible” Top that if you can. This is how Orthodox believers view their dynamic continuity with the ancient church and scripture.

Orthodox theology is anything but individualistic. As theologians in the West have sought to recover a view of Christian community as more than a conglomeration of individuals. they have often turned to the work of John Zizioulas, a Greek Orthodox bishop and theologian. In his highly influential Being as Communion he argues that the inter-relationship of the three persons of the Trinity should serve as a model for human relationships.

Sarah Coakley thinks Zizioulas has been popular among Protestant theologians because they were already looking for a way past the “rampant individualism” of their culture. A vision of persons acting in self-emptying ways toward one another is deeply appealing in such a setting. Protestants’ embrace of Zizioulas also reflects a “renewed interest in liturgy as a source of ‘truth.’ The tug of an ancient, unchanged liturgical tradition becomes especially pronounced in this climate,” says Coakley, a professor at Harvard Divinity School.

Many of the Orthodox bridges across Western intellectual divides would not have been built without the cataclysmic political events of the early 20th century. Westerners encountered Orthodoxy in the flesh when a wave of theologians and church leaders left Russia following the 1917 revolution. Some of these set up camp at the Institut Saint-Serge in Paris, a seminary for Russian emigrants presided over for a time by Sergei Bulgakov, who along with Vladimir Lossky was one of the beloved leaders and theologians of the Orthodox church of his generation. Other Russians fled farther west. George Florovsky first went to Paris, but went on to lead St. Vladimir’s Seminary in Crestwood, New York, and then to teach at Harvard.

The émigré generation remains enormously influential. Florovsky’s work has been available in English for some time. Translations of Lossky’s books are probably the most often read theological introductions to Orthodoxy. (The archbishop of Canterbury, Rowan Williams wrote his dissertation on Lossky. Williams also has a helpful introduction to Eastern Orthodox theology in The Modern Theologians, edited by David Ford.) Bulgakov is now being translated at a furious pace. Non-Russian Orthodox such as the Greek Zizioulas and the Romanian theologian Dmitru Staniloae have also had wide influence.

Orthodox intellectual life in America has long been centered at St. Vladimir’s, where John Meyendorff and Alexander Schmemann produced writings on liturgy and theology that remain must-reading for theologians, and at Holy Cross School of Theology in Brookline, Massachusetts. Both school’s publishing houses remain crucial sources for Orthodox theology new and old. Kallistos Ware, Olivier Clement. Alexander Gollitzen and Verna Harrison are other theologians and church leaders whose influence goes beyond Orthodox circles.

Many English-speaking theologians have encountered Orthodoxy through the ecumenical movement. The Orthodox joined the movement early on — much earlier than the official Roman Catholic involvement. Ancient orthodoxy has provided a starting point on which all parties in the ecumenical conversation could agree, and current Orthodoxy (of the Orthodox churches) has presented an incarnation of the ancient church from which all parties could learn. Further, the liturgical renewal of the past half-century has made Protestant worship more similar in form and in spirit to the ancient liturgy that the Orthodox champion and purport to continue uninterrupted.

The Orthodox have reminded Western churches of other key portions of Christian identity. Coakley notes that the Orthodox have helped members of the Church of England recall their “strong 17th-century tradition of engagement with the Greek patristic tradition,” as evident in the Anglican divines and later in the Oxford movement. It was British church leaders who translated Greek patristic figures like Athanasius and John Chrysostom alongside Augustine and Gregory the Great in the Nicene and PostNicene Fathers collection, a series still much in use in semmanes and beyond.

The Orthodox also suggest a way for the Western church to peel back the enormous influence of the West’s greatest teacher, Augustine. On the doctrine of the Trinity, for example, William Placher observes that some modern theologians think Augustine stressed the “oneness” of the Trinity to such an extent that God’s “threeness” was, lost. For a corrective view, theologians look to Eastern church fathers, such as the Cappadocians — Gregory of Nazianzus, Basil of Caesaria and Gregory of Nyssa.

Another Augustinian teaching, born of his clash with the Pelagians, is that salvation rests on the grace of God alone, not at all on the exercise of human freedom. The Orthodox, for their part, insist both that God is “sovereign” and that humans are free to embrace the love of God offered in Christ. When Catholic or Arminian or Calvinist theologians accuse the Orthodox of having it both ways, the Orthodox simply agree, and insist that God is mystery, beyond our knowing.

Indeed, a reliance on negative theology, an insistence on the human inability to know the God who is mystery, has remained central to Orthodox thought and practice. According to Pseudo-Dionysius, a sixth-century figure beloved in both East and West, God is “the inscrutable One out of reach of every rational process. Nor can any words come up to the inexpressible Good, this One, this Source of all unity, this supra-existent Being. Mind beyond mind, word beyond speech, it is gathered up by no discourse, by no intuition, by no name.” After centuries of working In rationalistic categories, in the wake of the Enlightenrnetfl, Plotesants in the West have reason to welcome negative theology.

For all that the Orthodox have taught or retaught Protestants, there are potential problems in this rediscovery of Orthodoxy. To read Orthodox texts without much interaction with actual Orthodox believers and their churches, schisms and political difficulties can lead to an unrealistic view of Orthodox life. And Orthodoxy can also be embraced as a refuge for alienated conservatives; it offers a place where no one is going to be calling God “she.”

While the West has struggled to come to terms with the relationship between modern forms of inquiry and ancient church dogma, the Orthodox seem to march on, untroubled by modern historical consciousness. Orthodox confidence (or potential complacency) on this point is captured in a joke: A Protestant, a Catholic and an Orthodox are discussing what Jesus would be upon his return to earth. The Protestant insists Jesus would be a Protestant, the Catholic insists he would be Catholic. The Orthodox looks puzzled and asks, “But why would he change?”

The more constructive role Orthodoxy can play is captured in another story; Protestant and Catholic theologians decided that they needed help in adjudicating their disputes. They decided to ask the Orthodox for advice. The two parties journeyed to the east and met with an Orthodox theologian. They explained their disagreements over faith and works, the location of church authority, the relation of scripture and tradition, and so on. After hearing the arguments, the Orthodox respondent asked each side, “Do you believe in the triune God exposited by the fathers of Nicaea?” Well, yes, of course. “Do you believe in the two natures of the one person of Jesus Christ?” Well, certainly. “Then embrace! You’re brothers.”

Jason Byassee is pastor of Shady Grove United Methodist Church in Providence. North Carolina. and a Ph.D. candidate in theology at Duke Divinity School. This article appeared in The Christian Century, December 28, 2004, pp. 24-25. Copyright by the Christian Century Foundation; used by permission. Current articles and subscriptions information can be found at www.christiancentury.org. This material was prepared for Religion Online by Ted and Winnie Brock.