Some consider evil as a punishment for a violation of the juridical world order. Thus, in its time, Western Scholasticism came to a conclusion that Satan happens to be the punishing tool in the hands of God. But this is not correct because people often suffer without being guilty at all. Orthodoxy considers evil as a sickness. Evil has no hypostases, substance, it is not a thing, because everything God created is “very good”. Evil is parasitizing upon the hypostases of good and although it is non-existent, it provokes sufferings to all good creatures.
Hieromonk Serapheim Starkoff | 11 September 2009

All of us encounter suffering in our lives. Sometimes we deserve to suffer, sometimes we do not. Curiously enough, our sufferings force us to reflect upon both their nature and origin; suddenly a world of questions and outlooks appear in front of us.

Suffering is closely connected to the so-called issue of evil in our lives. Where does the evil come from? For this reason, we have to describe the Orthodox perception of the world, based on the Holy Scriptures and Tradition. These two sources exist in unity; they are not religious systems, but a description of the divine economy in the life of the Ecclesiastical community.

The Uncreated God creates the Creation out of non-existence. Creation, being a non-existence, participates in the divine energies and becomes an existence. In the biblical narration about the creation of Man, the Lord breathed into the nostrils of Man a breath of life. That is how Man became a living soul.[1] We can draw a parallel with our breathing – Man breathes and connects to the air, so he lives. The entire Creation is quickened by the divine energy. In the first three chapters of Genesis, the creation of world, the issue of the forefathers’ sin and the evil are being depicted. It is noteworthy here, that all creation is described as “very good”.[2]

Although all creation is good, this good is relative and is not perfect. Creation happens to be in a constant motion towards perfection. The Lord created Man according to His image and likeness and placed him to lead all creation.[3] The “image” is a connection of Man with God, the “likeness” is a constant motion and alteration towards perfection. 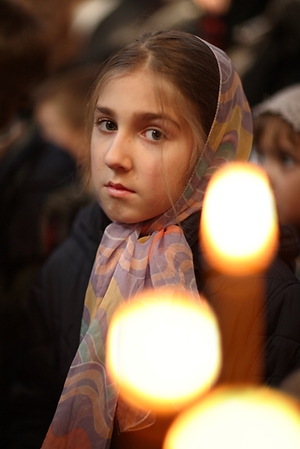 Some consider evil as a punishment for a violation of the juridical world order. Thus, in its time, Western Scholasticism came to a conclusion that Satan happens to be the punishing tool in the hands of God. But this is not correct because people often suffer without being guilty at all. Orthodoxy considers evil as a sickness. Evil has no hypostases, substance, it is not a thing, because everything God created is “very good”. Evil is parasitizing upon the hypostases of good and although it is non-existent, it provokes sufferings to all good creatures. So, George Herbert’s “Hell is full of good meaning and wishings” is very actual in this context. St. John of Damascus says that good is the beginning and the end of all, including evil.[4] We act wishing good and receive the deformed good – which is evil.

The consequences of communion with the knowledge of good and evil are as follows: hiding from the presence of the Lord, justification without repentance and heritage of decay and death. Let us take a short deviation, in order to mention that  Man himself, freely hid himself from the presence of the Lord, before the Lord “expelled” him from paradise. This indicates that the communication with God was ceased by the initiative of Adam. The Lord has nothing to do with the ceasing of communication between Man and God.[8] That is why the juridical pattern – guilt-punishment, in the light of above mentioned, seems to be at least weak.

As we mentioned before, the fall of the forefathers happened not only because of their free will. Man becomes a victim of the extraneous power, which tradition calls Satan or the Devil, having an ongoing struggle with him.[9]  Hence, after all the justification the Lord heard from Adam, who laid the blame upon his wife (and the Lord himself, who gave to him this wife!), and Eve, who laid the blame upon the serpent – the Lord defines to Man the way of his salvation. First of all, it is a struggle between the descendants of the serpent and those of Man.[10]  The Church calls it the first Gospel. The woman is Mother of God and her descendant is Christ who will “bruise” Satan and his servants – the descendants of the serpent. We must note that enmity and struggle are closely connected with the salvation of Man, i.e. the Lord does not define the struggle for the sake of a struggle, but this struggle bears fruit.

Next, we have a very valuable Narration connected to our theme – the meaning of suffering and sorrow in our life. The Lord says to the woman that the she will bear children in sorrow.[11] In the Gospel, the Lord clarifies this point. The sorrow transforms into joy.[12]  The birth of human beings into the world is a victory over death and salvation of human kind of death. Hence, we can call these sufferings “resurrecting”. It is most clear that sufferings are closely connected to the healing of the whole situation and to salvation.

In the end of the third chapter of Genesis, the Lord says that because of the forefathers’ sin, the earth is cursed. Man has to work hard, in sweat and sorrow for his bread.[13] Thus, the creation, this second body of Man, having not freedom, its own will, mechanically follows Man and becomes a subject to decay and destruction.

Regarding the above mentioned, we can conclude that evil, suffering, decay, destruction and death, entered our life as a consequence of the forefathers’ sin and exist together with our unceasing post-forefathers’ sins. But all these are closely connected to our salvation. Salvation is a comeback to direct communication of Man with God. Out of chaos and destruction, Man returns to divine harmony through repentance.

In the Gospel according to Luke, the Lord asks about the Galileans who were executed by Pilate, whether they were sinners above all the Galileans. Nay – says the Lord, but, except ye repent, ye shall all likewise perish.[14] So, the way to salvation is repentance.

Repentance is not our farfetched image of a sinner (“I am the worst”), but it is a door out of chaos to harmony. Usually, repentance follows humbleness. Pride is a fantasy about ourselves. Humbleness, in contrast to pride, is a logical evaluation of our state. It is a door out of fantasy to existing reality.

To clarify, let us parallel pride, fantasy, humbleness and repentance with the evangelical parable about the prodigal son.[15] The younger son, asks from father, his part of the inheritance, leaves the family home and in a “far country”, rejecting abstention, he wastes all his fortune by living a riotous life. Here, it is clear that he estimates the situation incorrectly; he is proud of himself that he is grown up and can get by, by himself. He is living in a fantasy not connected to reality. Then a famine happened in that far country and he has to find a job – to feed swine in order to survive somehow. He would be glad to fill his belly with the husk that swine ate, but he could not. Here, we have suffering – this is a fruit of pride, fantasy and breaking of connection with father. We have to notice here, that in this case, the sufferings and shortages sobered him up. The prodigal son gets humble, he estimates his condition rationally. Based on facts, he figures out that he cannot do everything by himself, that by breaking communication with his father, he came to hunger. So, he decides to repent and to say to his father: “Father, I have sinned against heaven, and before thee, and am no more worthy to be called thy son: make me as one of thy hired servants”. Next, he uses repentance practically; he goes to his father and asks for forgiveness; he enters into communication with him. That is how he gets rid of sufferings and shortages.

In conclusion, we can say that sufferings are a part of our fallen reality. In our freedom, following the example of the Lord, we can follow the sufferings to reach resurrection or eternally get firm in evil. We have to always remember that our struggle is against temptation, against the spirit of evil. These are not medieval concepts, but an everyday reality. So, we cannot count only upon our free will, it could be substituted, but upon the Lord. Sufferings could be humiliating and sobering, they can place us in front of our way to be healed. The way of healing lies through humbleness, repentance and of course, prayer, i.e. through communication with the Lord, to Him is glory unto the ages. Amen.

[1] Gen. 2:7  And the LORD God formed man of the dust of the ground, and breathed into his nostrils the breath of life; and man became a living soul.

[3] Gen. 1:26  And God said, Let us make man in our image, after our likeness: and let them have dominion over the fish of the sea, and over the fowl of the air, and over the cattle, and over all the earth, and over every creeping thing that creepeth upon the earth.

[4] St. John of Damascus. Dialogue against Manicheans. PG 94, 1560C  The beginning and the end of all, including evil is good. Everything belongs to good – the good and the opposing. We act wishing good; nobody turn his eyes towards bad, when he does what he does. So evil has not hypostases but para-hypostases.

[9] Ephes. 6:12 For we wrestle not against flesh and blood, but against principalities, against powers, against the rulers of the darkness of this world, against spiritual wickedness in high places.

But if we see the fast as an element of life, then it comes out clear that by…