The Kidnapped Bishops: Three Months and No Word 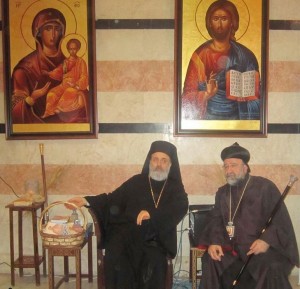 In the absence of proof of their death, it is not possible to confirm that they were killed by their kidnappers.

But we can wonder why international authorities, who are in contact with the Syrian rebels, are not demanding proof that they are alive or evidence that negotiations are ongoing.

This past Monday, July 22, made three months that we are without any news of Bishop Paul Yazigi, Greek Orthodox Metropolitan of Aleppo, and Bishop John Ibrahim, Syriac Orthodox bishop of the same city. “We have no information,” confirms Mgr Pascal Gollnisch, director of Œuvre d’Orient, who emphasizes the urgency and seriousness of this question. “Since seizing bishops demonstrates that priests and faithful are no longer safe in Syria, it threatens all the Christians of this country,” he says.

This absence of information has not prevented the most contradictory rumors from circulating since the announcement of the abduction of the two bishops on April 22 in the region of Aleppo. The day after their disappearance, the release of the two men had been briefly announced before being disproven. “If they had been murdered, we doubtless would have found out,” said Carol Saba, a Franco-Lebanese lawyer and head of communications for the Assembly of Orthodox Bishops of France, at a time when Orthodox the world over were preparing to celebrate Easter.

However, last month the British Catholic weekly The Tablet, citing a source in the region, suggested that the two are “probably dead” and would have been “killed the same day as their abduction.”

Total Obscurity about the Kidnappers’ Identity

This is a direction that Œuvre d’Orient is refusing to go down. “As long as we do not have proof of their death, we cannot confirm that they have been killed,” continues Mgr Gollnisch, who prefers to emphasize the responsibilities that international authorities have to act, specifically to come forward with proof that the two bishops are alive and that negotiations are in progress.

“Has there been any action by the UN? And the Turkish government, which implied that it could act, where is it? And the so-called ‘rebel’ authorities, are they taking action?” the French priest asks. Growing impatient with this silence that has lasted for three months, “Not openly publicizing ongoing negotiations, this is normal! But the Westerners who are necessarily in contact with the rebel authorities absolutely must ask them if they have someone that they are negotiating with” for the liberation of the two bishops.

As for the identity of the kidnappers, it remains completely unknown. Even so,  at Œuvre d’Orient they consider it very unlikely that the regime had the bishops kidnapped in order to blame it on the rebels. “The kidnappers are without a doubt from groups close to the rebels who could have acted for money, because of ethnic conflict, or even because of neighborhood disputes…” proposes Mgr Gollnisch. For him it is clear that those who have the ability to bring forward proof that the bishops are alive with their kidnappers must act as quickly as possible.

Most viewed articles
A Great Time to Join the Orthodox Church226
New Jersey Governor Signs Bill Legalizing Abortion Up To Moment of Birth87
The Way of Christ Is The Way of Love76
Metropolitan Hilarion: the Church and traditional confessions have done everything possible to improve the situation in Kazakhstan67
Brooklyn Street Co-Named for Antiochian Pastor Who Served a Half Century There62
First Church in the Antiochian Archdiocese Named for St. Xenia of St. Petersburg Prepares for Feast Day58
My World’s Different48
Patriarch Porfirije of the Serbia: Our Position on the Church Issue in Ukraine Has Not Changed18
4-400×6001
The Apostles’ Fast and Theology1
Most popular authors
Frederica Matthewes-Green222
Pravmir.com team128
Ryan Foley89
Fr. Theodore Stylianopoulos76
Peter Samore61
Protopresbyter Themistoklis Mourtzanos47