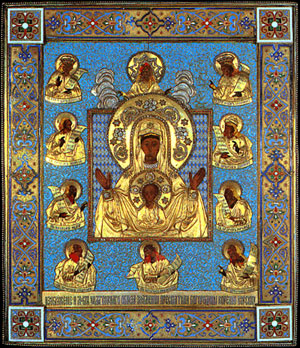 On June 19, 2012, with the blessing of His Eminence Archbishop Mark of Berlin and Germany, Vice President of the Synod of Bishops of the Russian Orthodox Church Outside of Russia, the miracle-working Kursk-Root Icon of the Mother of God “of the Sign” was brought to the construction site of a new stavropighial Church of All Saints in Strasbourg, France.

A moleben and akathist were served before the holy image by Hegumen Philipp (Ryabykh), the church rector and representative of the Moscow Patriarchate in the Council of Europe, parish clergyman Priest Evgeny Makushkin and Priest Dmitry Svistunov of the Diocese of Berlin and Germany.

Also praying at the service was Protopriest Miodrag Glisic, Rector of Transfiguration Church in Baden-Baden, Germany, as well as Jean-Michel Cros, representative of the municipality on religious affairs.

Despite the fact that the icon spent only an hour and a half at the church, the ancient Russian icon was venerated by some 200 worshipers.

At the end of the service, Fr Philipp delivered a sermon. He recalled that the type of icon of the Mother of God “of the Sign” (or “Orante”) depicts the Mother of God with raised arms with the Infant in Her lap, and is one of the most venerated types in the Russian Orthodox tradition.

“This iconographic type does not only exist among Eastern Christians. From ancient times, the residents of Strasbourg, or Argentorata, venerated the Most-Holy Mother of God. The city’s cathedral is named in Her honor, the history of which dates back to the 5th century. There is also the depiction of the Most-Holy Protectress of Strasbourg, typical to the orante type,” continued Fr Philipp. “According to tradition, the Most-Holy Theotokos responded to the pleas of the residents of the city in the 9th century to protect them against their enemies, appearing to them with upraised arms during the siege. The city was saved. Since then, the Mother of God has been particularly revered as the city’s Protectress, and Her image appeared on city symbols. On Strasbourg’s banners, the Mother of God is depicted with arms upraised, the Child Jesus giving a blessing with His right hand and holding a lily in His left. Unfortunately, a great banner of Strasbourg c. 1208 was destroyed during the French Revolution in 1789, and a military standard was destroyed during a library fire in 1870.

At the end of the service, the icon was ceremoniously brought to the construction site of a new church dedicated to All Saints. Hegumen Philipp carried the Kursk-Root Icon around the perimeter and invoked the help of the Mother of God in their effort. Funds are now being raised to continue construction.

There is an old expression that says, a Crisis separates the Men…

Most viewed articles
Patriarch Kirill Urges Women Not to Have an Abortion257
The Eros of Marriage236
Does It Matter if Jesus is God or Not?127
Good News from His Eminence Metropolitan Joseph119
The Emigration of Abraham66
Metropolitan Kirill of Kazan Visits Children Injured in the Attack on the Gymnasium63
Moleben for Peace in the Holy Land to Be Held Tomorrow in Moscow63
Courage,  Anyone?22
By Love and Loyalty to God Women Build Up the Church18
Most popular authors
Pravmir.com team384
Fr. Vasile Tudora236
Archpriest John Moses (+2019)127
Archbishop Joseph of New York and Metropolitan of All North America120
Archpriest Lawrence Farley66
Archpriest Geoffrey Korz24
Metropolitan Hilarion (Alfeyev)19
Maria Trushanina1