The Life of St. Nina

When the apostles had drawn lots to determine who was to preach where, the Theotokos had received the lot for Iberia, but she had been held back from going and was assured that someone would later enlighten it. In a dream, the Theotokos came to Nina and urged her to preach the gospel in Georgia. The Mother of God assured Nina that she would protect her and as a pledge, left a cross of grape vines.
admin | 26 January 2009

Born in Cappadocia in the late third century, St. Nina (or Nino, the Georgian form) was the only daughter of a Roman general, Zabulon, and his wife, Susanna. On her father’s side, she was related to St. George, and on her mother’s, to the Patriarch of Jerusalem. When Nina was twelve, her family traveled to Jerusalem, where with the Patriarch’s blessing, her father became a monk; her mother became a church worker; and Nina became the foster child of Nianfora, a pious elderly woman. Under the tutelage of her foster mother, Nina quickly learned the rules of faith and piety. 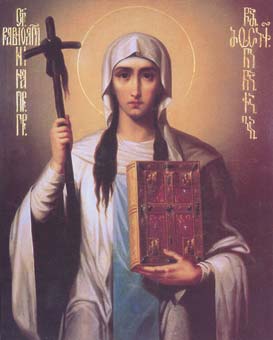 At fourteen, Nina questioned her mentor about the location of Christ’s robe; Nina felt that such an important relic could not have been lost. Nianfora told her that it was in Iberia (now Georgia), a land not yet completely illumined. When the apostles had drawn lots to determine who was to preach where, the Theotokos had received the lot for Iberia, but she had been held back from going and was assured that someone would later enlighten it. In a dream, the Theotokos came to Nina and urged her to preach the gospel in Georgia. The Mother of God assured Nina that she would protect her and as a pledge, left a cross of grape vines.

The patriarch, her uncle, was delighted with the news of her vision. He eagerly gave her his blessing:

When the time arrived for her departure, the patriarch led Nina into the church and up to the holy altar, and placing his hands on her head, he prayed the following words:

Lord God, Our Saviour! As I let this young girl depart to preach Thy Divinity, I commit her into Thy hands. Condescend, O Christ God, to be her Companion and Teacher everywhere that she proclaims Thy Good Tidings, and give her words with such force and wisdom that no one will be able to oppose or refute them. And Thou, most Holy Virgin Mother of God, Helper and Intercessor for all Christians, clothe with Thy strength against all enemies, visible and invisible, this girl whom Thou Thyself hast chosen to preach the Gospel of Thy Son and our God among the pagan nations. Be always for her a shield and an invincible protection, and do not deprive her of Thy favour until she has fulfilled Thy holy will.[1]

Nina joined the party of Princess Ripsimia, which was traveling to Georgia to escape the persecution of Diocletian. All but Nina, who was sheltered in a crevice, were martyred in Armenia after Ripsimia declined to marry the king, Tiridat.

Living as pilgrim, by the grace of God and on the bounty of strangers, Nina once became weary. She wondered briefly where she was going, what she was doing. She fell, exhausted, asleep and had a vision of a majestic man who handed her a scroll in Greek, which she read upon waking:

·         And when they bring you into the synagogues, and unto magistrates, and powers, take ye no thought how or what thing ye shall answer, or what ye shall say: for the Holy Spirit shall teach you in the same hour what ye ought to say. [Luke 12:11-12]

·         Go ye therefore, and teach all nations, baptizing them in the name of the Father, and of the Son, and of the Holy Spirit: Teaching them to observe all things whatsoever I have commanded you: and lo, I am with you always, even unto the end of the world. [Matt. 28:19-20]

Strengthened and reassured, Nina continued until she arrived in Georgia, where she witnessed the worship of the local gods. Praying that the idols might be destroyed, she also witnessed a downpour that washed the idols into the river and out of sight.

Nina settled in Mtskheta, the capital, where she lived in a hut near the royal gardener and his wife, Anastasia. There Nina gained a reputation for holiness both because of her daily piety and her miraculous healings. She cured Queen Nana of a disease no doctor had been able to relieve. King Mirian was converted when he was saved from a rain storm similar to the one that had destroyed his idols.

After preaching to and converting many Jews and pagans, Nina learned the story of Christ’s robe: a local Jew, Elioz, had obtained the robe from the soldier to whose lot it had fallen and had carried it home to Georgia. His sister, Sidonia, had clasped the robe to her breast and had died. No one could take the robe from her, and it had been buried with her. A cedar, now part of the royal garden, was said to have grown from her grave. Nina had doubts about the identification of the particular tree, but she knew from her visions that the ground was holy.

Nina died in the early fourth century, after she had seen Christianity spread throughout Georgia and had, through her preaching, converted a neighboring queen, Sophia of Kakhetian and her kingdom. Nina was buried, near the place where she had died, in Bodbi. The church built by her grave was dedicated to St. George and became the Bodbi metropolitanate. Her cross was sent to the cathedral in Mtskheta. During wars between the Byzantine and Persian empires, the cross was taken to Armenia and eventually to Moscow. Tsar Alexander I returned it to Georgia at the beginning of the 19th century.

[1] Anonymous, The Life of St. Nina Equal to the Apostles and Enlightener of Georgia with the Service, (Jordanville, NY: Holy Trinity Monastery, 1988) pp. 6-7.