The Life of St. Valentine

Of all the Saints that the Church remembers throughout the year, this Saint that I want to talk about today is probably recognized more than any other. With the exception of one other Saint, St. Nicholas, whose feast day is commemorated on Dec. 6 (during the same season as the birth of Christ), the name of this Saint is well-known throughout all of North America - and on his Feast Day, millions of people, both Christian and non-Christian, get involved in one great celebration - a celebration of love.
admin | 12 February 2009

Every day of the year, the Church commemorates and remembers certain Saints that have remained true to the faith throughout history. These Saint’s days are known as Feast Days. Of all the Saints that the Church remembers throughout the year, this Saint that I want to talk about today is probably recognized more than any other. With the exception of one other Saint, St. Nicholas, whose feast day is commemorated on Dec. 6 (during the same season as the birth of Christ), the name of this Saint is well-known throughout all of North America – and on his Feast Day, millions of people, both Christian and non-Christian, get involved in one great celebration – a celebration of love. The Saint’s name, as you’ve probably guessed by now, is St. Valentine, and his Feast Day is Feb. 14, the day of his death.

Every Feb. 14 we celebrate St. Valentine’s day. This is a day that brings up a lot of different images and pictures in our minds – Cards with hearts and little poems written on them. Candy and flowers given to someone you love. And images of cupids flying around shooting their arrows of love into unsuspecting people. Young and old alike expressing their affection for their sweethearts. February 14th for many means cards, candy, flowers, cupids, and boxes of chocolates.

Our Mothers and Fathers in the Christian Faith would probably be extremely surprised if they could see what’s become of Valentine’s Day – because what we call Valentine’s Day was at one time known throughout the Church as the “Feast of St. Valentine.” It was a religious holy day, because for Christians in the past this day was a day to remember and celebrate the life and death of a Christian martyr – someone who had died for their faith in Christ. In fact, for millions of Christians around the world today (those Christians who still take the time to remember and commemorate and honor the Saints) Feb. 14 is still considered a holy day.

St. Valentine was a Priest near Rome in about the year 270 A.D. At that time the Roman Emperor was Claudius II, who has come to be known throughout history as Claudius the Cruel. Around this time Claudius started persecuting and imprisoning Christians for not worshipping the Roman gods. It was also just a few years before this time that war broke out in the Roman Empire.

Claudius began calling for all the able-bodied men to go into battle with him, and year after year the fighting continued. Many of the Romans, however, were unwilling to go. The married men did not want to leave their families. The younger men did not wish to leave their sweethearts. And the emperor soon became angry when he saw that the number of soldiers were too few. And so, to free the young men from the burdens of marriage so that they would be free to go to war, he ordered that no marriages should be celebrated and that all engagements must be broken off immediately.

Many a young Roman went off to the wars in sorrow, leaving his sweetheart behind – knowing that he might never return to marry her.

It reminds me of the song that came out in the late 70’s:

Well, like most wars, there are many, many young men who don’t come back home.

Now, Valentine heard of the emperor’s command and felt it was a wrong command. So, when a young couple came to the Church, he secretly united them in Christian marriage. Soon afterwards another young couple came to him, and he secretly married them as well. It wasn’t long before the word spread, and others came and were quietly married. Valentine soon gained a reputation as a friend of lovers and sweethearts in every district of Rome.

But it’s hard to keep a secret like that for very long. Claudius, the Emperor had recently started a campaign of persecution against the Christians, and here was one of their Priests even disobeying his command.

And not only was Valentine helping young sweethearts get married, he was also known for helping other Christians escape before they could be sent to their death by Claudius. So Claudius sent out soldiers to find Valentine, which they did.

During the trial the Emperor tried to get Valentine to renounce his faith in Christ, and to pledge allegiance to the Roman gods Jupiter and Mercury. If he did that, then the Emperor would free Valentine. But Valentine replied that they were false gods and that the God that Jesus called Father was the only true God. So the Romans threw him in prison. 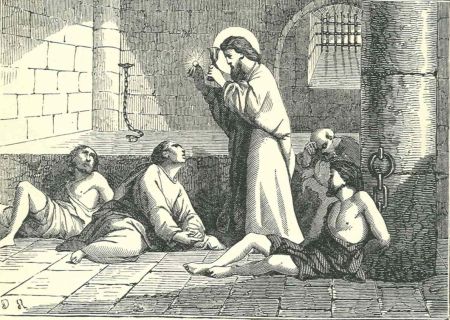 While in prison Valentine continued to minister to anyone he could. Like St. Paul the Apostle, who had been in a prison in that same city many years earlier, Valentine witnessed to the guards. One of the guards, a man by the name of Asterius, was a good man who had adopted a blind girl many years earlier when she was just a little child. He asked Valentine if his God could help his daughter. Valentine prayed for her, and God healed the girl, and restored her sight. Because of that, the guard and his whole family – all his relatives that were living in that area – 46 people – believed in Christ and were baptized.

When the emperor heard about this he was furious that Valentine was still making converts even in the prison, and so he decided to put an end to the work that Valentine was doing by having him tortured and beaten with clubs, and then afterwards had him beheaded. The date was Feb. 14, in the year 270 A.D.

History tells us that while Valentine was waiting for his own execution he fell in love with the jailer’s daughter that had been healed. But being in prison, he was unable to spend much time with her, or pursue a normal relationship. Just before he was led out to his execution, he managed to write one last note to her, a farewell message, and he signed it “From Your Valentine.”

His devoted friends buried him in the church of St. Praxedes. I’ve been told that if you travel to Rome you can still see the very place where he was buried.

Because of his great faithfulness to the Christian Faith, even unto death, the Church later declared Valentine to be one of the Saints of the Church. In the 4th century Pope Julius I built a church in honor of St. Valentine. In the 7th century Pope Honorius I restored it and it became a very popular pilgrimage site. Christians would go there every year on his Feast Day to remember and to honor his life and death.

But he continued anyway, because he loved Christ with all of his heart, soul, mind, and strength, and he loved his neighbor as himself. He was willing to risk his life to free the prisoners and spread the Gospel of Christ to those who needed to hear it. Because of his concern also for those who needed to be married in the Christian faith, St. Valentine is known today as the Patron Saint of sweethearts and lovers.

The Bible Says: “No one has greater love than this, than to lay down one’s life for one’s friends.”(John 15:13) God showed us this love by coming in Christ to die for our sins. And St. Valentine demonstrated this love when he died for his friends, and for his faith in Christ. This is the kind of love that Valentine’s Day is really all about. And this is what his Feast Day of Feb. 14 should bring to our minds. May God help us to have that same kind of love for others, and that same kind of commitment and faithfulness to Christ, even in the face of death, until the Lord calls us home.