The Loneliness of Modern Man

The internet has probably made us more connected, in a virtual sense, than we have been in a generation. But, of course, their is an extreme level of volunteerism in this virtual community. If I don’t want to post today there is nothing you can do about it. We are not a natural community. I cannot touch you or hear you laugh. I share a photo so you know something of what I look like. But how do I sound? How much of my native Appalachian dialect still clings to my tongue (not much, but some).
| 25 October 2009

In the Benedictine tradition, a monk makes four vows: poverty, chastity, obedience and stability. Most people are familiar with the first three but not with the fourth. In classical Benedictine practice it meant that a monk stayed put: he did not move from monastery to monastery. It was not a new idea. Before Benedict had written his rule, there was already the saying from the Desert: “Stay in your cell and your cell will teach you everything.”

Staying put or stability doesn’t sound all that difficult; nothing at all as hard as poverty, chastity and obedience. But it may indeed be the hardest of all. The “noonday devil” which tended to afflict monks from the beginning, was especially known as the temptation at some point to leave your cell and just go visiting, where gossip and many far worse temptations could make themselves manifest. Staying put was the hardest battle of all. In its most extreme form in the the East we see the Stylites, the monks who lived on the tops of pillars (St. Simeon’s was over 300 feet tall!)

In our modern world stability is an extremely rare commodity. The average American moves once every five years. When I first came to Oak Ridge (Tennessee), I was constantly told by the old-timers, “People in Oak Ridge are from everywhere!” In 1943 when this city was founded as part of the Manhattan Project, that statement was truly unusual. Americans rarely relocated. But I had to break the sad news to my new co-citizens, “Everywhere you go, people are from everywhere!” 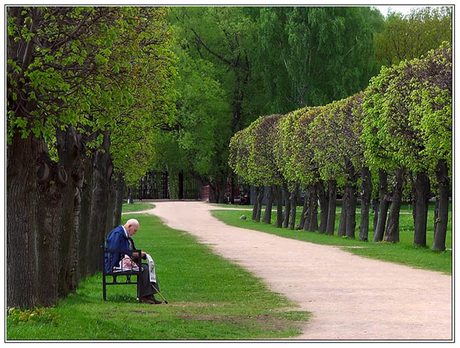 There was a time in my hometown in South Carolina that a trip to the store or Mall would bring a dozen casual meetings with friends and acquaintances. Now they are all strangers when I visit – or rather I am the stranger. I do not live there anymore.

All of this would just be sociologically interesting if it had not effect on our lives. But it has a profound effect.

In 1935 (to pick a date), the most common pattern in our country was for a local boy to meet and marry a local girl and to settle down and raise their children in the community in which they themselves were born, with relatives and friends forming a network of relationships that surrounded and nurtured (or harrassed) them. Divorce rates and crime rates were relatively low in most places. Stable communities tend to have stable families. The network of relationships promotes this. Human beings have lived in these relatively stable forms for most of human history.

In 2007 (to pick another date), the more common pattern is for a boy to meet a girl in college or later – he is from Virginia (say) and she is from Ohio (say). They marry, move to Oregon and begin their careers, or they met there and married. Family is the stuff you negotiate as in “whose parents do we visit at Thanksgiving this year, etc.” The network of friends is often his friends from work and her friends from work, and frequently not much more.

In 1980, living in Columbia, S.C., I attended a conference in which the lecturer asked an auditorium of about 400 to raise their hands if they new 5 people on their city block. A few hands went up. I wound up in the last group. I knew no one in the Apartment Complex where we lived. Most of us did not know a single neighbor. And that is not an unusal modern pattern.

This brings us to the loneliness of modern man. The internet has probably made us more connected, in a virtual sense, than we have been in a generation. But, of course, their is an extreme level of volunteerism in this virtual community. If I don’t want to post today there is nothing you can do about it. We are not a natural community.

I cannot touch you or hear you laugh. I share a photo so you know something of what I look like. But how do I sound? How much of my native Appalachian dialect still clings to my tongue (not much, but some).

And we only know what we choose to share. It makes for a very thin village indeed.

As modern man has lost his stability (I blame our economic structures largely for this phenomenon – moving expenses are tax-deductible, for example) so we have lost the fruit of stability. Crime, divorce, the simple consensus that makes a culture a culture disappears. The 1950’s three channel television and white-bread families were probably the last cultural manifestation of an earlier consensus that will not return. It cannot return without stability.

I have lived in Oak Ridge since 1989, in six years it will be the longest I have ever lived anywhere. I know many people in this town of 25,000 and I know my parish of 100+ souls quite well. Stability for me means I will be buried in this town. It is a goal I have, though, it is one of my long-term goals.

For all of us, some form of stability is necessary, even if it is one we must largely create ourselves.

I would point to the Orthodox Church as an example of stability. I can read from centuries of writings and recognize and understand what is said. St. Athanasius is as interesting to me on a daily basis as, say, Fr. John Behr. The “latest thing” in Orthodoxy just isn’t very late. There is a stability that comes within that part of life – a stability I cannot create but to which I can submit. I am Orthodox and I can daily seek to imbibe more fully what that means. It can create me (which is probably much to be preferred).

I cannot leave the modern world (or post-modern if you prefer). I was born in 1953 and there’s is nothing to be done about it. But there are commitments that I can make – that any of us can make. I am married. I do not take a vow of poverty, but everything I own is owned by my wife as well (no private property). If you have children, you will learn a certain form of poverty no matter what. I do not take a vow of chastity. But I only have one more woman than a monk. As far as all the other 3 billion women in the world are concerned – I am a monk. For the married, faithfulness is the natural form of chastity. I do not take a vow of obedience (nor did my wife for that matter), but I have a life of mutual submission – my will is not my own. We are not here because I alone wanted to be here. We are here because we wanted to be here (ultimately, I suppose there is obedience – to my Bishop, and to my God – but on a daily basis His Eminence does not interfere. God can also be strangely silent).

But stability is more fleeting. I think that only by becoming part of a larger community, even larger than the present and reaching into the past, do we begin to find stability. Oddly, Oak Ridge is more stable now than most towns. But none of it matches the stability of 2,000 years of living Tradition. To live my life in the neighborhood of the Kingdom of God where the saints know my name and encourage or harrass me if necessary.

God give us the grace to come to the place of stability in you. Put me some place where I can stay put.