The Lord is my Shepherd

Psalm 23 (Psalm 22 in the Septuagint) is particularly dear to my heart, as it is sure to be to millions of people of faith. This psalm has a very human character and it applies to our own existential relationship with God the Creator Who brought us into being and makes provision for our everyday sustenance and spiritual wellbeing. Its teaching reminds us of that which is most essential in our lives, that we are God’s children and so we must love and trust in Him for all things both in the present and in the future.
| 19 April 2010

The psalms are a fundamental part not only of the Jewish but also of the Christian Orthodox Tradition. The Psalter is the cornerstone of every Orthodox service. From the psalms Orthodox Christians have drawn inspiration, spiritual comfort and peace for centuries.

In all Orthodox churches, the authoritative text of the Old Testament is the ancient Greek translation known as the Septuagint. The Hebrew version of the Old Testament contains thirty-nine books. The Septuagint contains in addition ten further books, not present in the Hebrew, which are known in the Orthodox Church as the ‘Deutero-Canonical Books’, more commonly known in the Roman Catholic and Protestant churches as the ‘Apocrypha’ (3 Esdras; Tobit; Judith; 1, 2, and 3 Maccabees; Wisdom of Solomon; Ecclesiasticus; Baruch; Letter of Jeremiah).

Of all books of the Old Testament, the book of the psalms is without doubt that which has greater universal appeal throughout Christendom and, of course, amongst all Abrahamic Faiths. In Orthodox monasteries and convents, the reading and reciting of the psalms constitutes a daily service and is a part of the monastic discipline. 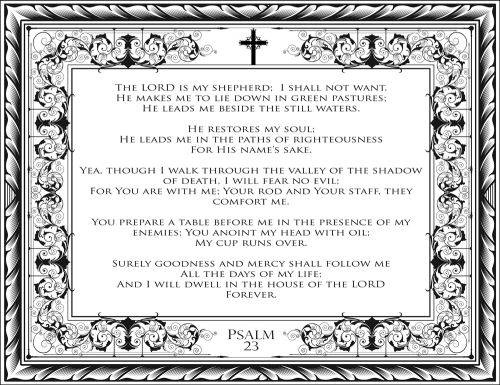 Psalm 23 (Psalm 22 in the Septuagint) is particularly dear to my heart, as it is sure to be to millions of people of faith. This psalm has a very human character and it applies to our own existential relationship with God the Creator Who brought us into being and makes provision for our everyday sustenance and spiritual wellbeing. Its teaching reminds us of that which is most essential in our lives, that we are God’s children and so we must love and trust in Him for all things both in the present and in the future.

The psalm is reminiscent of Christ’s teaching about the good shepherd. As a clergyman and in particular as an Archbishop, a shepherd of the spiritual flock that is my Archdiocese, the image and teaching of the shepherd is a constant reminder to imitate Christ in my own ministry. It helps me also to better understand my responsibilities toward my spiritual children for whom Christ gave His life in order to make them and us all members of His heavenly Kingdom. This psalm is also frequently used by Orthodox Christians in their prayers of preparation for Holy Communion, most certainly because of the phrase: “You prepare a table before me… your cup inebriates me…” Needless-to-day, it is the bishop’s primary task and privilege to celebrate the Eucharist. And so Psalm 23 for me reiterates the Eucharistic and hierarchical character of the Orthodox Church, and on a more personal level, it reminds me, a Shepherd of the Greek Orthodox Christian Flock in the United Kingdom, to always deepen my commitment to pastoral care and to my liturgical and educational responsibilities with fear of God and with awe and adoration of our only High Priest, the only Good Shepherd, Who gave Himself up for the life and salvation of the world. 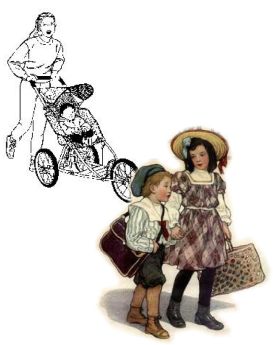 A mom was concerned about her kindergarten son walking to school. He didn‟t want his mother to walk with him. She wanted to give him the feeling that he had some independence but yet know that he was safe.

So she had an idea of how to handle it. She asked a neighbor if she would please follow him to school in the mornings, staying at a distance, so he probably wouldn‟t notice her.

She said that since she was up early with her toddler anyway, it would be a good way for them to get some exercise as well. So the neighbor agreed.

The next school day, the neighbor and her little girl set out following behind Timmy as he walked to school with another neighbor girl he knew. She did this for a whole week.

As the two walked and chatted, kicking stones and twigs, Timmy‟s little friend noticed the same lady was following them as she seemed to do every day all week. Finally she said to Timmy, “Have you noticed that lady following us to school all week? Do you know her?”

Timmy nonchalantly replied, “Yeah, I know who she is”.

The little girl said, “Well, who is she”.

“Shirley Goodnest? Who the heck is she and why is she following us?”

“Well”, Timmy explained, “every night my Mom makes me say the 23rd Psalm with my prayers, „cuz she worries about me so much. And in the Psalm, it says, „Shirley Goodnest and Marcy shall follow me all the days of my life‟, so I guess I‟ll just have to get used to it!”

“May Shirley Goodnest and Marcy be with you today and always”