The Moscow Sretensky Monastery Choir returns to America this October for the first time since their historic 2007 world tour. This acclaimed all-male choir from the famous 600-year-old Sretensky Monastery will embark on a three-week nine-city good will tour under the direction of Nikon Zhila, to celebrate the five-year anniversary of the reunification of the Russian Orthodox Church. Along with performances in the nation’s most prestigious concert halls, the choir will participate in Liturgies and Vespers as well as outreach activities throughout the US. 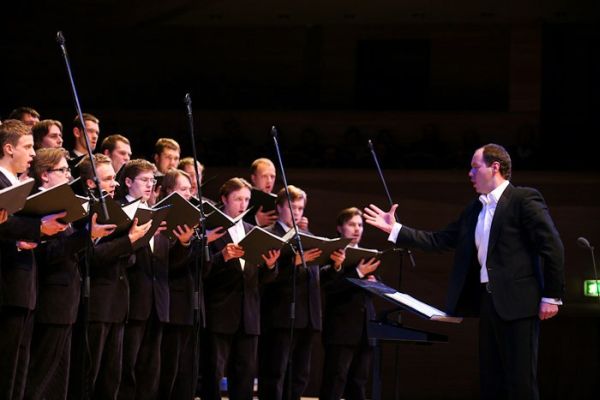 The tour program provides a unique overview of Russia’s rich choral tradition. Passionate scholars of liturgical music, members of The Moscow Sretensky Monastery Choir have unearthed forgotten ancient chants and arranged them with the 21st Century perspective, to be included in the concerts. The secular selections consist of Russian, Ukrainian and Cossack folk songs as well as popular 20th century romances. One of the featured soloists, Dmitry Beloselsky, was discovered by the international opera community when he performed with the choir on their 2007 world tour. This launched a solo career that brought him to the world’s leading opera houses including last year’s productions of Nabucco at The Metropolitan Opera where he appeared in the role of Zaccaria, and Boris Godunov at the Bolshoi Theatre where he played the tilte role.

“The Library of Congress is pleased to welcome back to our historic Coolidge Auditorium the Moscow Sretensky Monastery Choir as part of our 2012-2013 concert season,” said the Librarian of Congress James. H. Billington, the noted scholar of Russian culture. “It is appropriate that this extraordinary choir is beginning its American tour with sacred music, since the 600-year-old Monastic oral tradition represented the beginning and the basis for Russia’s distinctive musical tradition.”

Archimandrite Tikhon, the Abbot of the Moscow Sretensky Monastery and the Executive Secretary of the Russian Orthodox Church Patriarchal Council for Culture, will participate in the cultural events connected with the tour. Fr. Tikhon is also the author of a Russian national bestseller, Everyday Saints, which documents a remarkable spiritual journey. Released in Russia in 2011, it has surpassed in sales and popularity all other bestselling books in the nation. Over one million copies were sold in less than a year. The book has been translated into English for a US release by Pokrov Publications in September 2012. The book launch will take place October 8 at 12:30 PM at the Library of Congress. Proceeds from the book’s sales will be used to build a memorial cathedral in Moscow dedicated to the victims of the Communist regime. The editor of the book, Mother Cornelia, an American-born, Orthodox nun, who resides in Moscow will also travel with and look after the choir on their return to the US. A graduate of Indiana University Bloomington, Mother Cornelia is the English Editor of the largest Internet resource on Orthodox Christianity in the former Soviet Union (http://www.pravoslavie.ru/english/).

The tour will start with a by-invitation-only performance at the Library of Congress on October 6 at 8:00 PM. Members of the diplomatic corps, academics, cultural leaders and high-profile representatives of the Russian speaking community are expected to attend. The Russian mission at the UN will host a special reception on October 15, prior to the choir’s Carnegie Hall debut.

“The artistry of the Moscow Sretensky Monastery Choir is deeply influenced by the rich musical and spiritual traditions that have developed in the Christian world’s 2,000-year history”, says Nikita Mikhalkov, Russia’s most successful filmmaker, Academy Award winner and pre-eminent cultural figure, who regularly attends the divine services at the Sretensky Monastery. “This choir combines the Russian Orthodox experience with impeccable technique, considerable talent and youthful energy of the singers. Their rich and unique background places the choir firmly among the best vocal ensembles in the world.”

From the U.S. the choir will continue on to China to perform at the Beijing Music Festival organized by Maestro Long Yu, which includes a concert in the Forbidden City.