The Most Important Calling 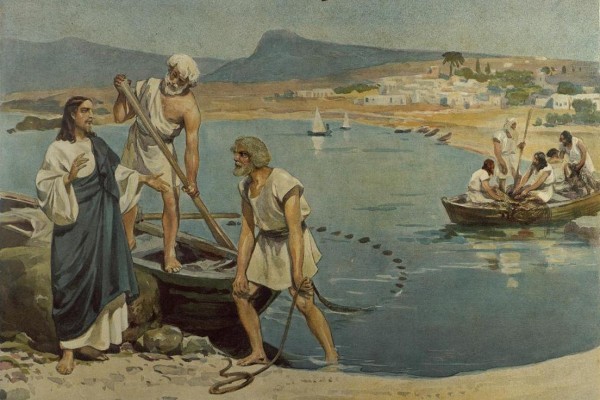 18 And Jesus, walking by the Sea of Galilee, saw two brothers, Simon called Peter, and Andrew his brother, casting a net into the sea; for they were fishermen. 19 Then He said to them, “Follow Me, and I will make you fishers of men.” 20 They immediately left their nets and followed Him.

21 Going on from there, He saw two other brothers, James the son of Zebedee, and John his brother, in the boat with Zebedee their father, mending their nets. He called them, 22 and immediately they left the boat and their father, and followed Him.

23 And Jesus went about all Galilee, teaching in their synagogues, preaching the gospel of the kingdom, and healing all kinds of sickness and all kinds of disease among the people.

The seemingly simple words the Evangelist uses to describe the calling of the Apostles conceal a true transformation of the lives of those who abandoned everything and followed Christ.  In our day and age “the calling” is discussed quite often.  People are trying to find out what their calling is at school, in university, and in ordinary houses.  Very often people correlate the problems in their personal or public lives, as well as the problems of seeking and choosing a profession, with a misunderstanding of the nature of their calling.

This is not really a correct approach, because it implies that people are divided into two unequal categories – of capable, talented people on the one hand, and simple, talentless people on the other.  Whereas from the point of view of God’s plan, there are no incapable people.

So, when we see that the Apostles viewed Christ’s call as a reality that they could not resist, that drew them as some powerful motion of a strange righteous will, we must understand that Christ’s call is in the same way addressed to each and every one of us.   Yet what does Christ the Saviour expect from us?

He expects very little.  Above all, we are called upon to follow Christ and to imitate His love.

An incident that took place in the life of Father John of Kronstadt who was afterwards glorified springs to mind.  When he was still a very young priest, he once dropped into the house of a very poor family in Kronstadt.  What he saw before him was extremely sad – filth, stench, a young woman worn out by her husband’s constant drinking, little children one smaller than the other.  Father John went inside the house, sat down on a chair, and took the children on his lap.  At that moment, the door suddenly opened and the blind drunk husband tumbled in, his eyes wild.  Seeing a priest in his house, he went completely mad.  Just stopping short of attacking him, the husband said, “Priest, what are you doing in my house?”

Father John was silent. Then he looked the man in the eye and replied, “Look what paradise you live in – what lovely children you have, what a wonderful hard-working wife!  Do not trade this paradise for the smoky atmosphere of a tavern.”

That was all he said, but, according to the memories of the former drunkard, those simple kind words spoken without judgement or reproach, without any pretence to a personal righteousness, reversed the whole course of the life of the former sinner.  He started sobbing, and a completely new way of life began with these tears.

This is what love can do.  This is what a man does when he remains faithful to his most important calling, to the calling to love.

May the Lord help us to avoid trying to hide from Him behind our supposed virtues and talents when what God is really waiting for is the most important thing, the talent to love.

Most viewed articles
Of Boasting and Modesty103
His Holiness Patriarch Kirill Contracted the Coronavirus103
4th Plenary Session between ROC and Coptic Church Held85
What Does the Cross Mean for us Today?42
Most popular authors
Pravmir.com team187
Archpriest Basil Ross Aden103
Priest Robert Miclean40