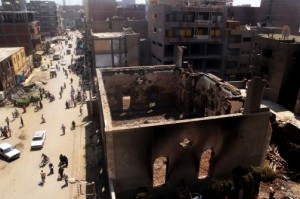 The Muslim Brotherhood is showing the world its true colors.

The group that “renounced violence” in an effort to gain political power is engaged in a full-scale campaign of terror against Egypt’s Christian minority. Brotherhood leaders have incited their followers to attack Christian homes, shops, schools and churches throughout the country. Samuel Tadros, an Egyptian scholar with the Hudson Institute, told me these attacks are the worst violence against the Coptic Church since the 14th century.

The news coming out of Egypt is staggering. USA Today reports that “forty churches have been looted and torched, while 23 others have been attacked and heavily damaged” in one week. According to the Coptic Orthodox and Catholic churches in Egypt, 160 Christian-owned buildings have also been attacked.

In one town, Islamists paraded three nuns on the streets like prisoners of war after burning their Franciscan school. The attackers tore a cross off the gate of the school and replaced it with an Islamist flag. The New York Times describedhundreds of Islamists in one attack, “lashing out so ferociously that marble altars were left in broken heaps on the floor.”

Two security guards working on a tour boat owned by Christians were burned alive. An orphanage was burned down. The Catholic Bishop of Luxor told the Vatican news agency Tuesday that he has been trapped in his home for 20 days by Islamist mobs chanting “Death to the Christians!” “People who reside in the villages of the area that have nothing because food supplies are running out and people are afraid to leave the house,” he said.

For the first time in 1600 years, prayers were not held in the Virgin Mary and Priest Ibram Monastery, which includes three churches, one of which is an archaeological site. According to the local priest, they were destroyed by supporters of former Egyptian president Mohamed Morsi. On one village street, Islamists painted a red Xon Muslim stores and a black X on Christian stores, so attackers knew where to focus their rage. On Tuesday, there were reports that the Brotherhood declared Friday prayers to be held in an evangelical church in the town of Minya that has been converted to a mosque.

The wave of attacks followed clashes between the military and Morsi supporters that left more than 800 dead. But what did the Christians have to do with that? Nothing. The leader of the military, like nearly every top government official in Egypt, is a devout Muslim. Yet, in the town of Al Nazla, a local mosque broadcast through its loudspeakers the lie that it was Christians who were attacking the protesters. Hundreds of villagers stormed the local church shouting “Allahu akbar” and “Islam is the solution,” according to local residents.

A Brotherhood spokesman dismissed the wave of attacks as being perpetrated by “foolish boys” and alleged a conspiracy against his organization. But the Facebook page of the Muslim Brotherhood’s Freedom and Justice Party is rife with false accusations meant to foment hatred against Copts, including the absurd claim that the Church has declared “war against Islam and Muslims” and justified the attacks by saying: “After all this, people ask why they burn the churches.” Then came a threat: “For every action there is a reaction.”

The Muslim Brotherhood has been inciting violence against the Copts in an effort to scapegoat the religious minority for the ouster of former president Mohamed Morsi. The FJP Facebook page is filled with the rhetoric the Brotherhood leaders have been using in their speeches at the sit-ins: “The pope of the Church is involved in the removal of the first elected Islamist president. The pope of the Church alleges Islamic Sharia is backwards, stubborn, and reactionary.”

It’s true that Pope Tawadros and most Coptic Christians supported Morsi’s removal. But they were a fraction of the larger coalition against him. After all, Christians make up just 10 percent of the population in a country where millions of people turned out to call for the removal of the Egyptian president. In raw numbers, far more Muslims opposed Morsi than Christians. Of the leaders who stood with al-Sisi as he announced the ouster of Morsi, the pope was joined by the grand imam of Al Azhar, Ahmed el-Tayeb, a respected Sunni cleric.

Even before the mass church burnings, 16 Egyptian human-rights organizations issued a statement saying they “strongly condemn rhetoric employed by leaders of the Muslim Brotherhood and their allies which includes clear incitement to violence and religious hatred in order to achieve political gains …” On August 15th, nine Egyptian human-rights groups released a statement saying, “In December … Brotherhood leaders began fomenting anti-Christian sectarian incitement. The anti-Coptic incitement and threats continued unabated up to the demonstrations of June 30 and, with the removal of President Morsi … morphed into sectarian violence, which was sanctioned by … the continued anti-Coptic rhetoric heard from the group’s leaders on the stage … throughout the sit-in.”

The Obama administration has been disengaged, first saying they were “concerned” on August 14, when a State Department spokesperson was asked about the ongoing attacks. The next day President Obama lumped the ongoing terrorizing of Christians in Egypt into a broader statement, saying, “We call on those who are protesting to do so peacefully and condemn the attacks that we’ve seen by protesters, including on churches.” In response to a question at Monday’s State Department press briefing, spokesperson Jen Psaki said, “We deplore in the strongest terms the reprehensible attacks …”

Middle East expert and Woodrow Wilson Center scholar Aaron David Miller told me in an interview, “The attacks on the churches is a problem that is not getting enough attention. The United States got on this far too late, in terms of condemning violence against the churches.”

Coptic Christians in Tennessee demonstrated this week, chanting, “Obama, Obama don’t you care? Christian blood is everywhere.” They shouted “eid wahda,” the Egyptian phrase that means “one hand” and has become the post-Morsi mantra. It conveys the widely held sentiment there that Egyptians, both Christians and Muslims, are united with the army against the Muslim Brotherhood.

This is not a Muslim versus Christian conflict, as much as the Muslim Brotherhood would like the world to think it is. A priest at one of the churches that was looted and burned told Al Jazeera  that most of his Muslim neighbors are peaceful. “Out of 50,000, you will find maybe 1,000 that are like [the attackers],” he said. The problem is the Muslim Brotherhood, full stop.  When will the Obama administration realize it?

Kirsten Powers is a columnist for The Daily Beast. She is also a contributor toUSA Today and a Fox News political analyst. She served in the Clinton administration from 1993 to 1998 and has worked in New York state and city politics. Her writing has been published in The Wall Street Journal, USA Today,New York Post, The New York Observer, Salon.com, Elle magazine, and American Prospect online.