The Opening of St. Joasaph of Belgorod Church in Brooklyn, NY 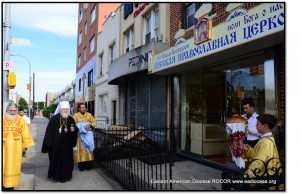 On Saturday, August 10, the Russian Orthodox faithful of Brooklyn, NY celebrated a joyous occasion in the life of the Eastern American Diocese – the blessing of a new church. With the blessing of His Eminence, Metropolitan Hilarion, a new parish was formed in the beginning of 2013, named in honor of the Holy Hierarch Joasaph, Bishop of Belgorod. This is the fourth church of the Eastern American Diocese to be opened up in Brooklyn over the past 15 years.

With such a large number of immigrants from the former Soviet Republics coming to Brooklyn, specifically to Brighton Beach, the opening of a new church able to accommodate their spiritual needs is welcome news. “We are extremely glad and thankful to the Lord for sending us this church,” said Eugenia Zaporozhets, warden of the parish’s adult Sunday school, who immigrated to Brooklyn from Russia. Like so many of her compatriots, she grew up in an atheistic country that persecuted Christians and tried to convince the people that God simply did not exist. “We grew up in the Soviet Union and did not go to church. If we did go to church, it was to inform on our classmates. That was our life, and that is why we are grateful to God for our church and our priest, who teaches us how to live properly as Christians.”

The Eastern American Diocese has been actively encouraging missionary work among this burgeoning immigrant community, whose members yearn for spiritual and moral guidance. It is our Metropolitan’s missionary vision that the Russian Orthodox Church is in a unique position to lead these people on the path toward salvation: “Our Church Abroad was founded by Russian immigrants and refugees. Because of this, we are able to speak to those who left everything behind in search of a new life, while reminding them that a truly fulfilling life can only be rooted in the commandments of Christ.”

The First Hierarch’s vision was echoed by New York City dean Archpriest Alexander Belya, who believes that there is a need for many Orthodox churches in Brooklyn to accommodate those who are searching for Christ, yet know very little of the Faith. “A person who wishes to be renewed, to become better, to live with God, understands that he must attend God’s church, and today that opportunity has been afforded to the residents of this neighborhood.”

Just because there is a large Orthodox population in the New York Metropolitan area does not mean that the process of opening a new church will be without challenges. In a borough like Brooklyn, it is not easy or affordable to rent, let alone buy a suitable building or space for worship. Nonetheless, under the direction of the newly appointed rector, Archpriest Boris Oparin, parishioners were able to rent a small storefront in Brooklyn’s Bensonhurst neighborhood and transform it into a cozy Orthodox temple.

Although the space is not large, the new church is well-adorned, with a handcrafted iconostasis and many icons, some of which are printed on canvas and mounted on the walls, giving the impression that the church is fully frescoed. While the outward appearance of a church may not be the most important factor in determining the spiritual health of the parish, an aesthetically pleasing temple will help attract passersby and hopefully spark an interest in the Orthodox life. “Look how cozy it is here – you come in and immediately feel a different mood,” Zaporozhets said. “I sometimes keep watch at the entry and candle counter, and greet newcomers. After visiting the church for the first time, many of them are overwhelmed by a feeling of grace and peacefulness, and assure me that they will return on a regular basis.”

A special plaque has been installed in the narthex of St. Joasaph’s Church, acknowledging the vital role that St. Nicholas Church played in the parish’s opening and adornment, and encouraging the faithful of Brooklyn to pray for the repose of the faithful in Millville.

After several months of preparation, the parish was finally ready to welcome its ruling bishop and the First Hierarch of the Russian Church Abroad, His Eminence, Metropolitan Hilarion, who held an Archpastoral visit to Brooklyn on August 10th in order to perform the lesser blessing of the church and lead the first Hierarchal Liturgy. His Eminence was co-served by Fr. Serge, Fr. Boris, Hieromonk Tikhon (Gayfudinov; cleric of the Synodal Cathedral of the Sign in New York City), Protodeacon Igor Panachev (cleric of St. Nicholas Patriarchal Cathedral in New York City), Protodeacon Leonid Roschko, and Deacon Michael Wengrin (clerics of St. George’s Church in Howell, NJ). Fr. Alexander Belya was also present for the Liturgy and prayed in the altar.

During the Liturgy, a special commemoration was held for the repose of His Beatitude, Metropolitan Anthony (Khrapovitsky), the first Primate of the Russian Church Abroad, in honor of the 77th anniversary of his blessed repose.

In his sermon upon completion of the Divine Liturgy, Metropolitan Hilarion addressed the faithful and congratulated them with the blessing of their new church. The Metropolitan noted that “the opening of new churches is a great grace from God to all the people.” He called on the parishioners to follow in the footsteps of their patron saint, the Holy Hierarch Joasaph of Belgorod, and to imitate him in their own spiritual lives. Understanding that the physical construction of a church is only the first step in building a parish community, the Metropolitan urged parishioners to focus their attention on the spiritual needs of the parish by genuinely living a life in Christ. “I wish all of you physical and spiritual strength, patience, and health, that this community might grow not only in number, but especially in spirit and sanctity – St. Joasaph loved to observe this in his flock. Always strive to be closer to God – grow closer to Him, pray to Him constantly, and He will cover you with His almighty grace.”

A diocesan Gramota was then presented to Fr. Boris and Matushka Tatiana Oparin for their selfless labors and substantial personal investment in founding the parish. Accepting the Gramota, Fr. Boris reminded parishioners that any award received by a rector is first and foremost an award bestowed on his faithful parishioners. After the Liturgy, a bountiful luncheon was offered in the parish refectory, during which many congratulatory remarks and words of encouragement were offered on behalf of the new parish.

With God’s help, the future of St. Joasaph’s Church is indeed a bright one. Witnessing the brotherly love and unity among the parishioners, it is obvious that the newly blessed church building will soon be outgrown. The parish already has its own Sunday school, in which approximately 40 students are enrolled, thus fortifying the future generation in the salvific virtues of the Orthodox Faith. Grounded in these blessed precepts, the energy and faith of these young men and women give us hope that even more churches will need opening in the near future.