<img border="0" hspace="4" align="left" src="https://pravmir.com/wp-content/uploads/pravmir-images/valamo_100.jpg">Another meaning of the word orthodox is right worship. We need always to remember that the Orthodox Church never experienced the Reformation. It is not "reformed" because it never needed to be reformed as the West defined it. The controversies of the West have had little or no influence in the East. One evidence of this is the fact that the Orthodox Church has never revised its Liturgies.
Archpriest George Morelli | 27 October 2008

Source: The Antiochian Orthodox Parish in the City of London

Eleven years ago, when my wife and I joined the Orthodox Church, I told two of my sisters what we had just done. They both reacted with much the same words, “thank God you haven”t become a Roman Catholic, what is Orthodoxy?” This sums up much of the current position – Orthodoxy is not Catholicism, but what on earth is it? 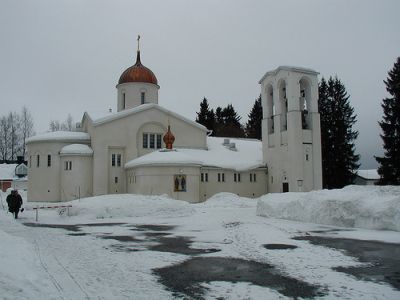 A short time ago we invited a well known Evangelical leader to have lunch with us at our Institute for Orthodox Christian Studies at Cambridge University. The author of many erudite books on Evangelicalism revealed that he knew next to nothing about Orthodoxy. It would be unjust to blame this ignorance entirely on non-Orthodox people. The Orthodox Church can often seem unapproachable. Whether this is due to a lack of self esteem, or a desire to be left alone, is difficult to assess. It may be a mixture of both. But a major factor influencing Orthodoxy for a very long time has been its relationship to its political superiors in the Ottoman Empire, Islam, and in the case of eastern Europe – communism. However, I have personally experienced this standoffishness on several occasions. In the early 90s I went on a search for the Orthodox beginning in the Middle East. I visited them in Cyprus, Israel, Jordan and Egypt. Frankly it was largely a waste of time. Then it all changed. It was not in the heat of the Middle East, but in the sub-zero winter temperatures of Finland that I touched base with Orthodoxy for the first time. It was at the Monastery of New Valamo. When we stepped off the train from Helsinki it was -30 Celsius. It was my first experience of attending the Orthodox Eucharist, and the Chief Celebrant was Bishop (now Metropolitan) Ambrosius. When we entered the Chapel the Bishop invited us to sit next to him “so that I can explain the service to you”. I was overwhelmed by his kindness, and the service was memorable to me. After it was over the Bishop invited us to discuss Orthodoxy in the sauna! How Finnish and how Christian! I was increasingly captivated by the whole approach of Orthodoxy to Christianity. I found a fullness of faith and doctrine which I had never seen or experienced before. It was all there, nothing was missing. In 1987 over 2000 Evangelicals from the American Bible Belt were received into the Antiochian Orthodox Church. Most of them are still there, and their numbers have been swollen by thousands of others. Now around 70% of Antiochian Priests in North America are former Anglicans. What drew so many whose backgrounds were Oral Roberts University, Assemblies of God, Campus Crusade for Christ etc, into the Orthodox Church? One answer could be – they filled in the gaps in history. For so many of these people history stopped with the Apostles and only started again at the Reformation. The leaders studied carefully the Church Fathers. A fatal error if you want to avoid Orthodoxy! As the word denotes, Orthodoxy is about correct doctrine. It was the controversy in the Church of England about the Resurrection which first made me look somewhere else. I was shocked when one of the Bishops spoke about “a conjuring trick with bones”. Even more when over half of all diocesan Bishops could not affirm that Christ is risen. But worst of all when those who did believe could do nothing about it, and most could not be bothered anyway. Some years about I was in central Africa on a online pokies WCC visit; in discussion Professor Walter Hollenweger suggested that some of the Church Fathers were Unitarian. I shall never forget the response of Bishop Markos of the Egyptian Coptic Church, he leapt to his feet and came over to where the Professor was sitting; I thought he was going to hit him! A tirade in defence of orthodox Christianity poured forth from the Bishop. The heart of Orthodoxy is the proclamation of the apostolic faith – the faith of the Apostles of Christ and the Church Fathers, the affirmation of the Ecumenical Councils. I love it – and I feel safe in it. The Church is being built on rock, and the gates of hell have not and never will prevail against it. Elsewhere I see shifting sands of doubt and uncertainty.

Another meaning of the word orthodox is right worship. We need always to remember that the Orthodox Church never experienced the Reformation. It is not “reformed” because it never needed to be reformed as the West defined it. The controversies of the West have had little or no influence in the East. One evidence of this is the fact that the Orthodox Church has never revised its Liturgies. They have evolved, but they are substantially the same through all the centuries. We are fortunate indeed to have escaped the modern western obsession with liturgical revisions. We enjoy the blessing of continuity. Orthodox services can be very long. I have been at some that last four hours. But the length can be exaggerated. The St John Chrysostom Eucharist usually lasts 90 minutes. But in any case, as one Orthodox Priest put it “when you are in heaven, what”s the hurry.” We can be thankful also that Orthodoxy is not in the business of flirting with “being relevant”. We do not have any inclination to please the world, or fashion our church life to accord with worldly principles. We see our faith as bringing us into a relationship with Jesus Christ, and to be relevant to Him eclipses any inclinations to satisfy the world. Orthodox “right teaching” and “right worship” are to be seen and experienced as a partnership. The Orthodox understanding of “teaching” is that it affects our whole being. It is not just a mental exercise. And Orthodox worship is packed with teaching, expressed in such a way as to fill the worshippers with joy and peace. It is all there in the words of the services. If the question is asked “what is Orthodoxy?” we can truthfully reply, “come and see (and hear)”. The words and the symbolism tell the whole story. An important Orthodox prophet of the 20th century was Paul Evdokimov, who taught for many years at the St Sergius Institute in Paris. He wrote, “Christians have done just about everything to sterilise the Gospel. Onwe could say that it has been plunged into a neutralising solution. Everything that is striking in it, all that transcends and turns things upside down, has been moderated, sterilized to death. Religion, having become inoffensive, is now flat, shrewd, and above all, reasonable, and remains simply to be vomited out.” He goes on “the Church is no longer, as in the first centuries, the triumphal march of Life through the graveyards of the world”. Let me conclude – sadly the church scene in the West is of a body of people electing to join the graveyard rather than being the agency of resurrection. However, for a growing number of people the Orthodox Church is a sign of hope and a bastion of strength. Christ is Risen is the cry that goes up at Pascha (Easter) – He is Risen indeed.

Most viewed articles
Critical Theory, Social Justice, and the Attempt to Disfigure the “Transfiguration”205
Patriarch Kirill Urges Believers to Fight New Idolatry in Their Own Lives137
The Frontier of Personhood115
Disoriented83
Bell-Ringing Unites Believers from Different Countries on the Day of the Baptism of Rus (+Video)72
Saint Macrina the Younger as a Model for our Lives8
Christ Forgives and Heals1
Most popular authors
Pravmir.com team209
Eric Hyde205
Archpriest Stephen Freeman115
Fr. Stephen Powley83
Protopresbyter Fr. George Papavarnavas8
Fr. Theodore Stylianopoulos1