The Personal Tragedy of Emperor Constantine

“Great people must experience great sorrow on earth,” wrote Dostoevsky. Constantine the Great, the first Christian Emperor of Rome, was certainly not called “Great” in vain. In those days, the word had the implication of “known to everyone for his merits, outstanding.” Likewise called “Great” was the celebrated Egyptian theologian, Bishop Athanasius, who had spoken out against the claim that the Son was not God, but only a creation that God, alone and terrible in His isolation, could dispose of as He saw fit. 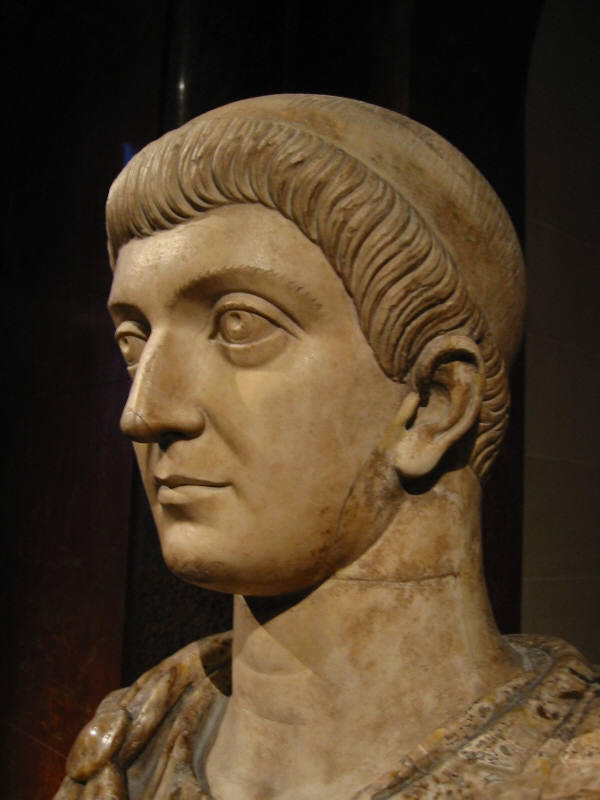 Athanasius and Constantine had met before the First Ecumenical Council and then, at the Council, the Emperor repeated hopefully the word he trusted would put an end to the debate within the Church: this was the famous homoousios, which means “consubstantial” or “one in essence.” This word signified the mystery of Christ, the Son of God.

The Council upheld the term homoousios almost unanimously: 218 out of 220 bishops.

Let us recall what this remarkable gathering, which has been designated the First Ecumenical Council, was all about. The bishops of the formerly persecuted Church came and met both with one another and with the Emperor – and, in his person, with the same Roman Empire that for three centuries had told Christians: “You should not exist!”

Constantine, the Emperor, stood and met the confessing bishops who had suffered for Christ, personally greeting them with a kiss. This was akin to a wondrous dream, much like the feeling experienced by Russian believers in the early 1990s, when television showed not “the last priest,” as Khrushchev had promised, but church services and the Patriarch.

But Constantine was the Emperor of the Roman Empire – and how difficult it is for us to imagine his status in that distant, difficult time of transition! Yes, the Roman Emperor was worshipped as a god. One cannot claim that everyone did so insincerely – the recent work of Ittai Gradel’s on this question demonstrates just the opposite. Constantine was a figure to whom non-Christians rendered divine tribute, just as they had to Diocletian and Augustus… It suffices to mention that when the Council was meeting a delegation from Umbria came to the Emperor requesting permission to build a temple in his honor. Constantine, surrounded by Christian bishops, received the envoys. He was a bit confused – he had, after all, introduced the equality of all the Empire’s religions before the law. Now the Hellenes were asking for this equality. They asked for this favor in such a way that the Emperor, after some hesitation, resolved: “Build, but it should not be polluted by the deceits of any contagious superstition.”

The envoys from Umbria retreated, recalling the time at the beginning of the Christian era when the Emperor was called “savior” and “god.” The work of the First Ecumenical Council likewise came to an end, having proclaimed the Son’s Divinity equal with that of the Father… Time passed. 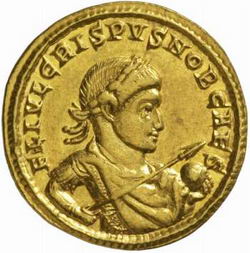 The year 326 arrived. The twentieth anniversary of Constantine’s rule, which had coincided with the First Ecumenical Council, was behind him. At the aged Emperor’s side was his young, energetic, talented son Crispus. Victorious general, admiral, and Consul that he was, bearing a strong resemblance to his father in both appearance and spiritual qualities, he was his father’s favorite and heir. So everyone thought, until Crispus was brought to trial before his father on charges of conspiring to seize the emperor’s throne.

Who knows what kind of storm was underway in the Emperor Constantine’s soul? After all, this is not simply a matter of forgiving an attempt on his personal power and paternal feelings. No, we are dealing with Romans, with their notions and honor, with the good of the country. Could it really be, Crispus my beloved son, that you have decided to overturn everything that we built together? Are you really no better than the Empire’s enemies, than Licinius and Maxentius? Are you, too, ready to place your own ambitions above that of the “Pax Romana”? Do you want to plunge the commonwealth into the abyss of civil war? O Crispus, my son! You, who was born in Nicomedia, where your father was a hostage to Diocletian! Do you really not deserve the name of Roman?

Crispus, as noble and stubborn as his father, maintained his silence. He remained silent even when being led away to execution. “How difficult it is for you, Constantine,” cooed his second wife, Fausta. “You’ve lost a son who was unworthy of you. But don’t be sad: you still have three sons. My sons.”

The terrible truth flashed like lightning through the aged Emperor’s mind. He was sent reeling – like the Emperor Vespasian once had, dying of a heart attack during a meeting of the Senate. The senators and physicians had run to Vespasian, imploring him to sit down. “No,” he replied, “an Emperor should die on his feet.” He looked at his son, the military commander Titus, and said: “Alas, it seems that I have become a god.”

Constantine neither died nor became a god. He felt that he was a deceived, orphaned, and lonely man left among people whose only need of him was to be given his huge empire. An empire in which, as he had dreamed with Crispus, there would be neither Greek, nor Jew, nor pagan, nor Christian; where there would be no tottering local nationalisms, but where the Son of God alone would reign unto the ages…

He retreated to his palace in Nicomedia, where in his youth he had been a hostage of Diocletian and had witnessed the martyrdom of Christians. Who knows, perhaps he had befriended Pantaleon, who was executed then? It is no accident that the Emperor brought the body of Pantaleon-Panteleimon to his new city, the New Rome, which seemed to him the beginning of a new Christian ecumene. The New Rome, the plan for which he had discussed with Crispus…

He grew weaker, withdrawing more and more into his inescapable paternal grief and contemplating the Son of God. Athanasius the Great was in exile because of the intrigues of episcopal schemers in court: Constantine’s word no longer carried such weight. He had placed his hopes for victory in the death of the Incarnate God, the Son of God – for only God can cause the departed to return and only with Him does his boy Crispus live, as Bishop Athanasius the Great had comforted him during one of their encounters.

Fausta’s young sons, who had not carried out much mourning for their mother – who had died in random and inexplicable circumstances – had already begun to claim their father’s inheritance, quarreling and arguing. 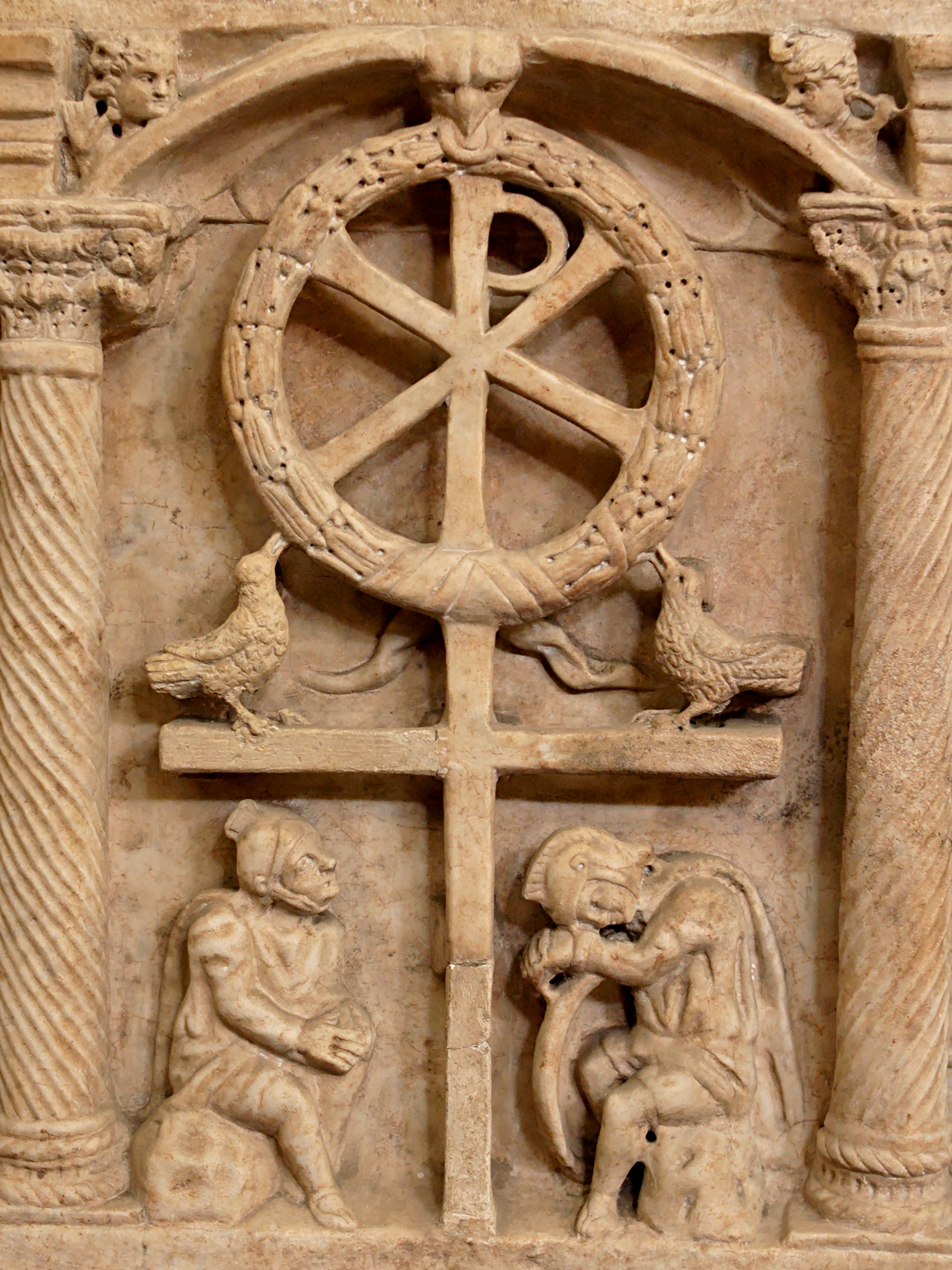 When Constantine died, they laid him out in a white baptismal garment in an expensive tomb. The sun was shining over Nicomedia; it was midday on Pentecost. Soon Fausta’s sons – Constantine, Constantius, and Constans – would be not just quarreling, but fighting to the death, and Constantine II would be killed by his brother Constans. Soon all the relatives of Constantine the Great’s brother, Julius Constantius, would fall victim to the massacre perpetrated by Constantine the Great’s sons. The only ones left standing were the slow-witted Gallus – and Julian, saved by Christian bishops, who was destined to occupy his uncle’s throne and receive the name of “Apostate.”

But Constantine the Great did not see any of this. Like Trajan in Dante’s Paradise, he flew away as an eagle, the symbol of Rome, to the midday sun – on whose disk long ago, before the decisive battle of his life at the Milvian Bridge, he had seen an inscription: “You will conquer” and the letters “Chi” and “Rho” – the monogram of Christ, the Living God.

The Venerable Martyr Elizabeth: The Mystery of Witnessing to Christ Unto Blood

The twentieth, cruel and unmerciful century, which is now stands behind humanity, still remains among the years from…