The Political Problem of Evil

I had a recent meeting with a priest, who said something to me that I would have never taken seriously prior to a year ago.  He said, “You are fighting against real darkness.”  He was referring to my involvement in a movement to protect the rights of children to be raised by a mom and dad. 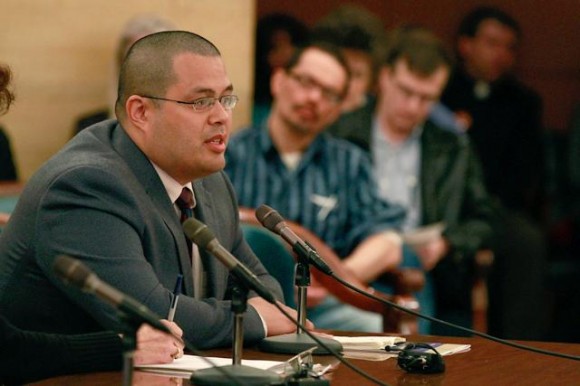 For most of my life I’d been wary of anything that seemed superstitious.  The Catholicism I knew as a youth was a liberation theology championed by my lesbian mother and articulated by radical priests who’d gotten involved in Central American insurgencies.  For twelve years of public school in upstate New York, regardless of the racism around us, the curriculum was wholesomely multicultural.  Then I went to an Ivy League college a year after Allan Bloom published The Closing of the American Mind.  Back then, only a few old people had realized that open-mindedness taken to the extreme would become moral blindness.

Needless to say, little in my life prompted me to speak in terms of good and evil prior to 2012.

It was a year ago, however, in an article on The Public Discourse, that I came forward with a truthful critique of the LGBT movement.  That movement and its problems were something that I knew more personally than almost anyone in the world, since I’d been raised from my toddler years onward in a gay household, and I came out as bisexual myself the same year that my mother passed away.

My piece in The Public Discourse on August 6, 2012, “Growing up with Two Moms,” wasn’t grounded in religious condemnations of homosexuality.  It was, rather, an uncensored summary of what life was like for a child born into leftist utopian dreams gone awry.  It did not seem implausible for me to love my mother yet concede that her divorce from my father and her taking up with another woman for almost all the years that I was being raised by her caused me lifelong wounds that never healed.

The gay lobby had few ways to rebut my point, so they had to resort to vomiting out random insults.  I wasn’t lying, so investigating my personal life wasn’t going to help.  I wasn’t a closet case, so they couldn’t “out” me the way they had crushed many of their other antagonists.  And while I am just as much of a sinner as the next guy, hypocrisy was a tough charge to throw at me, because I’d actually applied what I’d learned from my own difficult childhood to my choices as a father later on.  As an adult, when I found out that I had gotten a woman pregnant, I decided I would never put another human being in the same situation I knew as a boy.  I would not repeat the mistake of the father who abandoned me when I was born.  I would not repeat the mistake of the mother who entangled me in a homosexual imbroglio that left me socially defenseless against a cruel world when she died.

I stayed with the mother of my child, to raise our child together, because I knew better than anyone else that that’s the best thing for a kid.  Millions of years of evolution, not to mention thousands of years of cultural history, have left the human being with a developmental template designed for growth under the custody of a man and a woman in a mutually supportive sexual relationship.  My decision to place my daughter and wife ahead of politics, I realized, wasn’t merely a personal choice.  It was an ethical imperative that I felt called upon to share with others, because the gay lobby was pushing many people to do the opposite — that is, to place sexual ideology before the duty to love all of their children, including the halves of their children that came from the opposite sex.

In the ensuing year, my life became an endless array of traumas.  Repeated attempts to get me fired failed, so finally the gay lobby placed me on a “commentator accountability” list with a host of other people identified as “anti-gay” and blocked from access in the mainstream media.  The Supreme Court cases on DOMA and Proposition 8 sucked me into the vortex, as did the fight for gay marriage in Minnesota, the struggle for gay marriage in France and Britain, and the battle over gay adoption in Russia’s Duma.  I’d spent twenty years trying to be a writer, but I ended up receiving international attention not for what I wrote, but rather because my life seemed to people like a tawdry Jerry Springer vignette.

Those who disagreed with me recruited students, family members, and colleagues to denounce me.  They dug up an old novel that I’d written and trashed it, calling me the worst writer ever.  They tear-gassed my camp in Paris, butted against barricades to lunge at us in Brussels, and called me “loathsome” in St. Paul.  They filed complaints, issued denunciations, e-mailed me hate and vileness beyond anything I could ever imagine.

No leftist came to my defense.  Only Christians did.

Being sinful and unenlightened, I became involved with politics, in the beginning, with a fear of being labeled a believer.  I thought somehow that if I kept God out of my arguments, and by necessity out of my thought process, the secular, liberal world would heed my message and give a fair hearing to the rights of the weakest among us.  I marched in France with leaders of the kids’ rights movement, at one point a million people strong on the streets of Paris, beseeching the world to place a child’s right to a mom and dad above the clamor of gay adults to own children.

The leaders of the French “Manif pour Tous” worked hard to keep religious iconography out of their march.  Like me, they saw Christian theology as a liability for their movement.  De-theologizing themselves backfired.  The result was that François Hollande’s socialist government ignored them, legalized homosexual adoption, and put in motion plans to make sperm-banking universally available to lesbian couples — something they’d promised the French never to do.  Publicly subsidized surrogacy arrangements for gay men are soon to follow.

My fear of being associated with God, of talking about God, and of diagnosing the real evil behind what we fight has been not a rational strength, but rather an existential weakness.  To fight what we fight, we have to understand that it is an ancient beast, recorded in the biblical books like Job and Ecclesiastes.  When Ecclesiastes wrote that there was nothing new under the sun, he meant the message for us.  We can’t ignore it.

A similar message was meant for us when God asked a beleaguered Job, “Have you an arm like God?  Can you thunder with a voice like Him?” (40:9).  Our political foes are stronger than us, but nobody is stronger than God.  Only if we call upon God will we find any reprieve from the freefall of a postmodern America defined by Obama’s left.

After seeing same-sex parenting advance in leaps and bounds in country after country, I realized that the priest is right.  Ecclesiastes saw this long ago.  The message to Job is still as real as it was when first delivered.  It is real darkness that we fight.

The gay movement will never make peace with us until we disown the most important message of Christ.  Christ says we must not live in the urges and ambitions of this world, but must live according to his pure vision of love.  God gave up Christ to be sacrificed so that we would all be freed from the bondage of sin.  There is no way to reconcile this doctrine with the gay lobby’s insistence that they can define themselves according to fleshly desires of this world and buy immortality by purchasing children.  Make peace with the gay lobby, and we lose God, condemning ourselves to an eternity without the greatest love of all.

“The hate you encounter,” the priest told me, “is the cry of pain from people who are hurting, because they are living in such darkness.”

What will the right be without God?  Without the courage to name and fight evil?  Without discernment?  I have found an answer to those questions, but all of us must decide on our own, I suppose.