The Power to Do the Things that are “Humanly Impossible” 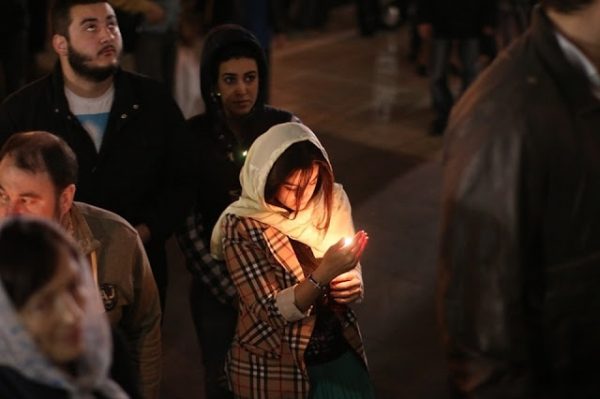 There is a special prayer that all of you know by heart.  It serves as a daily reminder of how big of a deal the Holy Spirit is in the life of an Orthodox Christian.

“O Heavenly King, the comforter, the spirit of truth, who art everywhere present and fills all things, treasury of blessings and giver of life…come and abide in us, and cleanse us from every impurity, and save our souls o Good one!”

This prayer is one that calls down the Holy Spirit to give us the power to accomplish what is set before us.  We say it before any good work that we are about to do!  It begins all of our prayers and services.  We say it before meetings, before classes, and before reading scripture, because in all aspects of life, we ask the Holy Spirit to come and abide in us and give us the power to complete the things in life that without Him, are simply impossible to do!

In order for us to gain a deeper understanding of the power of which I am speaking of, I wanted to offer three real world examples of how the Holy Spirit strengthens us in ways that simply do not make sense in the secular world.

1.)    Fear, particularly fear of death, is completely wiped away.

After the Holy Spirit descended on the Disciples, they went from hiding in an upper room, to becoming bold proclaimers of the faith.  This was despite all of the Jewish leaders that were out to get them!

This boldness was just the beginning!  How many men and women, whose lives we read about every day, JOYFULLY went to their deaths proclaiming the truth of Christianity to others?  This doesn’t make logical sense to the outside world!  They would ask:  “Why risk your life for faith?  For a book?  For a story about a Man who was born to a poor family, who supposedly performed miracles, who was accused and condemned to death, and who’s body disappeared three days later?”

They did it because their Christian faith wasn’t just a mental exercise, it was something that they lived.  They knew it was truth, because they experienced the Holy Spirit within them.  They experienced what True Life was for the first time and no worldly power or thought could take that away from them.

How can a person pray constantly?  It’s humanly impossible to do!  There are so many things that require our attention and our effort in this world, how can someone, even someone who has dedicated their entire life to prayer?  How can one learn to pray without ceasing?

There is a video I love to share with our catechumens of a Romanian Hermit who is speaking to a reporter about how to achieve prayer of the heart.  He beautifully said:

“One’s empowerment for prayer comes from God.  It is according to God’s will that it descends into one’s heart.  I once had prayer of the heart…and I lost it because of my unworthiness.  But when you are in contact with the Holy Spirit, you just sit there…and the Holy Spirit prays for you!  Just like a mill, once you put the belt on, it keeps running by itself without you.

And how do you get this to happen?  Purity of heart…and Smirenie (Humility)…because exalting oneself…haughtiness, has always been repulsive to God.”

If we prepare ourselves properly, the Holy Spirit can even pray for us, giving us a power that is not humanly possible!

3.)    Learning to Love Even our Worst Enemies.

I was inspired this week, while reading the life of St. Nektarios, a Bishop who lived in Greece in the 20thcentury, who spent a lifetime of being the victim of slander from people, even religious leaders of the time!

There was a particular story that struck me, where at the end of his life, there was a certain woman whose beautiful daughter had gone to a convent that was started by St. Nektarios to become a nun.  The mother was so angry with him, that she spread a horrible rumor that St. Nektarios, this saintly man who could barely walk because of many illnesses and physical ailments, had seduced this large group of women who were now living with him in this place of “ill repute” under the disguise of a monastery.

The town prosecutor stormed the monastery and burst into St. Nektarios’s office and screamed:  “You have made a harem here and you aren’t embarrassed?  Where is the well where you throw the bastards that are born from those supposedly tonsured nuns?  You are a low life…and repulsive!  Tell me all you have done, or I will throw you down, step on your throat, and pluck out the hairs of your beard one by one…you dirty old man!”

St. Nektarios’s response?  Did he offer a defense?  Demand the man get out of his office?  Scream and proclaim his innocence?  No.  Instead he emulated the words of the prophet Isaiah when he was foretelling Jesus’s response to the accusations against Him: “Like a blameless lamb…before it’s shearers is dumb…so He opens not his mouth.”

St. Nektarios lifted up his arms in prayer while the prosecutor searched the entire monastery looking for a lie.

When that same prosecutor ended up in the hospital a few months later with gangrene, his wife came to the monastery to apologize to St. Nektarios, who then turned around and offered deep and heartfelt prayers for the torment that his persecutor was going through.  Only by the power of the Holy Spirit can someone respond with prayer and love towards their enemies, just like St. Nektarios had done all of his life, and that power is within us today!

Brothers and Sisters in Christ, Our Lord once said: “With men, these things are impossible.  But with God, all things are possible.”  If we take a deep enough look at the lives the Saints, we can see this theme play out over and over since the beginning of time!