The unmarried woman careth for the things of the Lord, that she may be holy in body and in spirit… (1 Cor. 7:34) 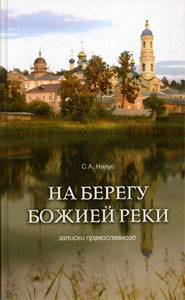 On the Banks of God’s River by S.Nilus bookcover

Elena Andreyevna Voronova is a rare example of a righteous woman who neither married, nor was a nun, nor a fool-for-Christ. Her life might well have remained hidden were it not for the spiritually sensitive soul of one of Holy Russia’s most talented authors, Sergei Nilus. The following, taken from Nilus’ book, On the Banks of God’s River, is a brief illustration of what strength of spirit can be contained in a “fragile” vessel.

From childhood Elena Andreyevna suffered from weak lungs. Upon finishing her higher education, she went south to the Crimea to benefit from the warm climate. Despite her fragile health, Elena Andreyevna had an energetic temperament. Her heart was filled with love and the desire to serve her fellow man. Under the rays of the warm Crimean sun, her health improved and Elena Andreyevna set about founding a model school which elicited the admiration and approbation of the country’ s Ober-Procurator, K. P. Pobedonostsev whose friendship with Elena Voronova lasted the rest of his life.

Returning to the northern capital, Elena Voronova soon became involved in a benevolent society which ministered to prisoners. Here it was that she blossomed forth with all the meek and warm qualities of her Christian Soul. How many criminals already sentenced to death were granted reprieve by the Tsar due to the intercession of this compassionate woman who so often pleaded on behalf of those prisoners whose repentance she felt was firm and genuine. Elena Andreyevna would bring her “case” before Metropolitan Anthony (Votkovsky) who in turn served as mediator between her and “her” prisoners, and the Tsar.

One of Elena Andreyevna’s most beloved duties in her work among the prisoners was to read aloud to them either from the Holy Scripture or from some other soul-profiting book. Even among hardened criminals she would discover hearts which were not deaf to the call of the Christian faith and the teaching of the Orthodox Church.

Unfortunately, there are very few recorded accounts concerning those prisoners who were converted to a new life under the influence of Elena Voronova. But among those which do exist, one case deserves special notice.

It was Elena Andreyevna’s custom to visit the prison hospital, bringing with her some books and small crosses to he given to those prisoners who did not have them and who wouldn’t refuse them. She was well-known there by both the guards and the prisoners with whom she had established a friendly and trusting rapport. This was not easily done with prisoners but, as she herself testified, God helped her in this by the prayers of the Optina elders to whom she went for spiritual guidance.

One day when she came to the prison hospital, she noticed a prisoner whom she hadn’t seen before. He was lying on his hospital bed; his face had a very dark although intelligent expression; On his feet were fetters-evidently he was a particularly dangerous criminal. When Elena Andreyevna sat down to read, he gave her a look of hatred and then turned his face towards the wall. His whole demeanor, his sick body, and especially his fetters, made a very strong impression on Elena Andreyevna’s compassionate heart.

Later Elena Andreyevna related that she could not remember what it was she had discussed that day, nor what she bad read, only that God helped and everything went well.

After the discussion she noticed that the new prisoner had, in the course of her reading. turned once again towards her; it seemed that his expression was less harsh. she began to hand out the crosses to those prisoners Who requested them–every prisoner asked for one. Approaching the new prisoner, she timidly offered him a cross. The thought crossed her mind: what if he should turn away or utter some blasphemy? but with her heart ‘ she prayed for him, He neither turned away nor said a word as she put a cross around his neck.

Some time passed and Elena Andreyevna again visited the prison hospital. She noticed that the fettered prisoner was no longer there. When she inquired after him she was told that he was placed in solitary confinement; his case had been tried and for political crimes and the murder of five persons he had been sentenced to death. The other prisoners said that in leaving he had asked them to tell her that he was still wearing the cross she had given him, and he also requested that she come to see him if at all possible before the execution.

Elena Andreyevna was very moved by this news and decided with God’s help somehow to arrange a meeting with him. Permission was granted and here she found out that his name was Hilarion and that only after a long search he had at last been caught in his sister’s apartmont. Just before the police arrested him, he had fired a shot which went straight into his pregnant sister’s abdomen, killing her unborn child; this was his fifth murder. Clearly he was a vicious criminal and fully deserving of the death penalty. Nonetheless, Elena Andreyevna’s heart went out to him, hoping to see even in such a darkened soul, at least a glimmer of God’s image.

As she entered the cell, the door was locked and bolted behind her. Left alone face to face with such a criminal, her heart momentarily gave way and she all but regretted having come. Hilarion was lying on the bed and when she entered he began to get up and pull his legs with the clanking fetters over the side of the bed. It was a painful sight.

‘Thank-you for coming! I was afraid you wouldn’t. Did they tell you I hadn’t taken off your cross?–he asked.

–Then I ‘m grateful to them too. You probably aleady know that I’m sentenced to, death; my days are numbered. Tell me, you were explaining things so well there in the hospital, could you explain for me the meaning of a dream which I had here? I saw that I was in a dark place–whether in a swamp or somewhere much worse, and I was covered all over with the most disgusting filth. Only my legs were left white. What does this mean? I don’t understand it but somehow I feel this dream is significant; it left such a strong impression. Can you explain it to me?

At this moment Elena Andreyevna felt that the explanation of this dream was a key to something very important for Hilarian’s soul; the turning of this hardened sinful soul from darkness to light might well depend on its correct interpretation–not according to human reasoning, but inspired from Above.

In her heart Elena Andreyevna fervently begged God for wisdom.

I think, Hilarion, she replied, that this dream was given you from Above, to show you that no matter how sinful you are before God and man, you too can hope in God’s mercy-on the condition, however, that you continue towards Him along the path of repentance which you have already begun; after all, you did not remove the cross you were given; on your legs, even during your illness, were iron fetters which caused you great pain, and so your legs, cleansed by this suffering, were shown to you to be white. Is it not from above that you have been assigned the death penalty and all its accompanying torments as a final cleansing, just as the cross for the repentant thief, so that together with him you might be in paradise? Only say as he did–first: “I art justly condemned, for I have received according to my deeds,” and then: “Remember me O Lord, in Thy Kingdom!”

When she finished speaking, Elena Andreyevna glanced at Hilarion. His head was bowed and two tear drops were quietly running down his cheeks. He was silent for moment and then he said:

–You are right; I must suffer to atone for all the evil I have done. Thank you; you have done something very great for me; you have opened up for me a new world. What is left to me of this life I must lay upon the cross of my final sufferings before death. Remember me, O Lord, in Thy Kingdom.

The reader can well imagine what went o in Elena Andreyevna’s soul on hearing these words and sensing Hilarion’s genuine repentance. She knew she could ask Metropolitan Anthony that his sentence be lightened, and yet.., knowing something greater than the prolongation of an earthly life was at hand she kept silent. Hilarion continued:

–I shall not ask you, as would be usual in my case, to have me pardoned. ‘Just call for me the prison priest; I must cleanse my soul by repentance and receive, if only I an worthy, the Holy Mysteries–God grant that this be so! Of you I have a last request–

After a tearful embrace they parted for the last time.

Never in very  good health, Elena Andreyevna became ill and was forced to give up her prison visits. She developed angina pectoris and this, combined with her ailing lungs, caused her much suffering. For several months before her death she lay in bed. Then on Monday of Passion Week, 1916, she became radiant and said to her friend:

–Sonia, I shall die on Good Friday. The Lord Himself came and told me!

And so she died, having seen God, on the day of the great suffering of the Lord, offering her own sufferings for the countless prisoners whose repentance–and freedom–was bought by the compassionate tears and heartfelt prayers of her God-loving soul.

Blessed are the pure in heart, for they shall see God.