Then, one night, the mother fell to her knees and began to pray fervently to Saint Nicholas the Wonderworker, begging him to take the place of her daughter's father and to save her from an evil destiny.The old woman said that never in her life had she prayed so fervently. She felt the presence of the Saint next to her, and she spoke to him, pouring out all the pain in her heart that she had been suffering for the sake of her daughter. And Saint Nicholas heard her.
admin | 19 December 2008 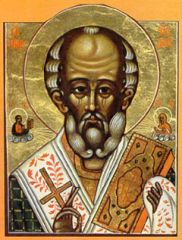 Five years ago I was in Saratov waiting for a flight to Moscow, which had been delayed due to inclement weather. Next to me sat an elderly woman, and we struck up a conversation. She, too, was flying to Moscow, and then to France. This caught my interest: it’s not every day that an elderly woman from Saratov flies to Paris! I asked to know what prompted her trip to France. “Oh, that’s quite a story,” she replied. “Do you want to hear it?”

I gladly prepared to listen.

The old woman related that her husband had passed away long ago, and that she had had to raise their only child, a daughter, alone. The girl was a good student, she graduated from a music conservatory with a talent for singing. She began working at the philharmonic and toured many Russian cities singing in concerts. But then – tragedy: the daughter became addicted to alcohol. All the mother’s entreaties, all her tears, were of no avail. The daughter became callous, she skipped rehearsals and stayed out nights, rapidly descending into a deepening abyss.  The mother did not know what to do, she could not sleep at night, and entertained thoughts of suicide as the only means of relieving her anguish.

Then, one night, the mother fell to her knees and began to pray fervently to Saint Nicholas the Wonderworker, begging him to take the place of her daughter’s father and to save her from an evil destiny.

The old woman said that never in her life had she prayed so fervently. She felt the presence of the Saint next to her, and she spoke to him, pouring out all the pain in her heart that she had been suffering for the sake of her daughter. And Saint Nicholas heard her.

The following day her daughter was very quiet, tranquil. She asked her mother’s forgiveness and wept bitterly. Soon thereafter a group of musicians from the philharmonic were chosen to perform in France. Among them was the daughter.

The Russians met with great success. In Paris, after one such concert, a Frenchman introduced himself to the girl. They became acquainted, and he immediately proposed to her. She took it as a joke, but two weeks later the Frenchman turned up in Saratov! They filled out papers, and registered the marriage in France.

Ten years have passed, and the daughter is still happily married and living in France. She has a son, and the elderly mother has been several times to visit them. Now she is going to live with them.

The old woman longs to go to Italy, to Bari, to venerate the relics of Saint Nicholas and thank him for the miracle.