The Services of Christmas in the Orthodox Church

<img border="0" hspace="4" align="left" src="https://pravmir.com/wp-content/uploads/pravmir-images/service_100.jpg">Coming at the end of the Forefeast, and indeed of the entire Advent, the Hours summarize all the themes of the feast and make them into a last and solemn announcement. In the special psalms, hymns and biblical readings prescribed for each hour, the joy and power of Christ’s Coming are proclaimed. It is one last meditation on the cosmical meaning of the Nativity, on the decisive and radical change it performed in the entire creation.<br /><br />
Protopresbyter Alexander Schmemann | 23 December 2008

As Orthodox Christians, we begin the celebration of the Nativity of Christ — on December 25 — with a time of preparation. Forty days before the feast of the birth of Our Lord we enter the period of the Christmas Fast: to purify both soul and body to enter properly into and partake of the great spiritual reality of Christ’s Coming. This fasting season does not constitute the intense liturgical season that is characteristic of Great Lent; rather, Christmas Lent is more of an “ascetical” rather than “liturgical” nature. Nevertheless, the Christmas fasting season is reflected in the life of the Church in a number of liturgical notes that announce the coming feast.

Within the forty days preparation the theme of the approaching Nativity is introduced in the services and liturgical commemorations, little by little. If the beginning of the fast on November 15 is not liturgically marked by any hymn, five days later, on the eve of the Feast of the Entrance of the Theotokos into the Temple, we hear the first announcement from the nine hirmoi of the Christmas Canon: “Christ is born, glorify Him!”

With these words something changes in our life, in the very air we breathe, in the entire mood of the Church’s life. It is as if we perceive far, far away, the first light of the greatest possible joy — the coming of God into His world! Thus the Church announces the coming of Christ, the Incarnation of God, His entrance into the world for its salvation. Then, on the two Sundays preceding Christmas, the Church commemorates the Forefathers and the Fathers: the prophets and the saints of the Old Testament who prepared that coming, who made history itself into the expectation, the waiting for, the salvation and reconciliation of mankind with God. Finally, on December 20th, the church begins the Forefeast of the Nativity, whose liturgical structure is similar to the Holy Week preceding Pascha — for the birth of the Son of God as child is the beginning of the saving ministry which will lead Him, for the sake of our salvation, to the ultimate sacrifice of the Cross. 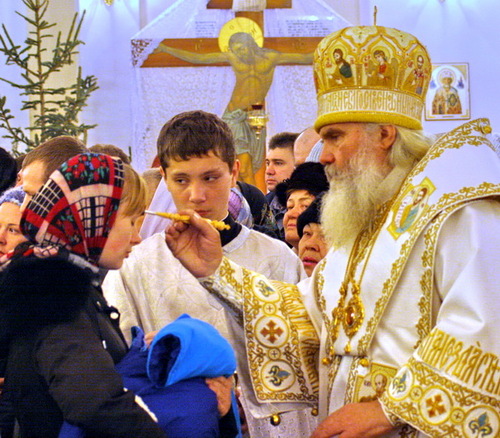 The liturgical services of December casino online 24th, the Eve of the Nativity, are:

3. The Divine Liturgy of St. Basil the Great.

Coming at the end of the Forefeast, and indeed of the entire Advent, the Hours summarize all the themes of the feast and make them into a last and solemn announcement. In the special psalms, hymns and biblical readings prescribed for each hour, the joy and power of Christ’s Coming are proclaimed. It is one last meditation on the cosmical meaning of the Nativity, on the decisive and radical change it performed in the entire creation.

Vespers, which usually follows the Hours, inaugurates the celebration of the feast itself, for, as we know, the liturgical day begins in the evening. The tone of this celebration is given by the five stichera on “Lord, I call….” What they really are is an explosion of joy for the gift of Christ’s Incarnation, which is now fulfilled! Eight biblical readings show that Christ is the fulfillment of all prophecies, that His Kingdom is the Kingdom “of all ages,” that all human history finds its meaning in it, and the entire cosmos its center.

The Liturgy of St. Basil which follows Vespers was in the past the baptismal liturgy at which catechumens were baptized, chrismated and integrated into the Church, the Body of Christ. The double joy of the feast, for the newly-baptized and other members of the Church, is reflected in the prokeimenon of the day:

The Lord said to me: Thou art My son,

this day have I begotten Thee.

Ask of Me, and I shall give Thee the nations for Thine inheritance, and the ends of the earth as Thy possession.

Then, at the end of the Liturgy, the celebrant, taking a lighted candle to the very centre of the Church, and surrounded by the entire congregation, intones the troparion and kontakion of the Feast:

Thy Nativity, O Christ our God,

Has shone to the world the light of wisdom.

For by it, those who worshipped the stars

Were taught by a star to adore Thee,

The Sun of Righteousness,

And to know Thee, the Orient from on high.

The Vigil and the Liturgy

Since Vespers of the feast already have been celebrated, the Vigil begins with Great Compline and the joyful proclamation from Isaiah “God is with us!” The order of Matins is that of a great feast. Now, for the first time, the full Canon “Christ is born…,” one of the most beautiful canons in Orthodox worship, is sung while the faithful venerate the icon of Christ’s Nativity. The Praises follow, summarizing the joy and themes of the entire feast:

Dance for joy, O mountains; for Christ is born!

She carries at her bosom God the Word, made flesh.

Angels praise Him and sing:

Concluding the celebration of the Nativity of Christ is the Liturgy of the day itself with its festal antiphons proclaiming:

…The Lord will send Thee the scepter of power from Zion: “Rule in the midst of Thine enemies.” With Thee is dominion on the day of Thy birth, in the radiance of holiness.

On the second day of the feast, the Synaxis of the Theotokos is celebrated. Combining the hymns of the Nativity with those celebrating the Mother of God, the Church points to Mary as the one through whom the Incarnation was made possible. His humanity — concretely and historically — is the humanity He received from Mary. His Body is, first of all, her body; His life is her life. This feast, the assembly in honour of the Theotokos, is probably the most ancient feast of Mary in the Christian tradition, the very beginning of her veneration by the Church.

Six days of post-feast bring the Christmas season to a close on December 31. At the services of all these days, the Church repeats the hymns and songs glorifying Christ’s Incarnation, reminding us that the source and the foundation of our salvation is only to be found in the One Who, as God before the ages, came into this world and for our sake was “born as a little Child.”

The Rev. Alexander Schmemann in the book The Services of Christmas: The Nativity of Our Lord Jesus Christ, David Anderson and John Erickson, Dept of Religious Education, Orthodox Church in America, Syosset, New York, 1981.