Not too long ago someone asked me why I make the sign of the Cross from the right to the left. It was pointed out to me that, in the West, it is from the left to the right. I pointed out to this person that in the One, Holy, Catholic, and Apostolic Church, the Sign of the Cross was always from the right to the left: “I will go to the right,” “Thine own right hand can save thee,” “Thy right hand is full of righteousness,” and “Thy right hand hath upheld me.”
admin | 19 October 2008

The revealing article that follows is from a Roman Catholic periodical, The Pilgrim (Jan.-Feb., 1998, Brooklyn, Missouri). 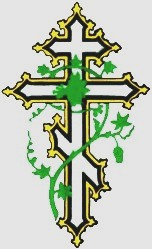 Not too long ago someone asked me why I make the sign of the Cross from the right to the left. It was pointed out to me that, in the West, it is from the left to the right. I pointed out to this person that in the One, Holy, Catholic, and Apostolic Church, the Sign of the Cross was always from the right to the left: “I will go to the right,” “Thine own right hand can save thee,” “Thy right hand is full of righteousness,” and “Thy right hand hath upheld me.” These are but a few references to the right hand as the hand of honor. I am sure that we can all think and quote many more references well known from Scripture. Also, it was the Good thief, who confessed Christ and was crucified with Him on His right side. It is interesting that when the Church was undivided, both East and West shared many things in common; one of them was the Sign of the Cross.

I just recently came across the following information. According to the New Catholic Encyclopedia, “In the thirteenth century we find Pope Innocent III (1198-1216) directing that the sign is to be made with three fingers from the forehead to the breast and from the right to the left shoulder. Later the whole hand with fingers extended was used, and the direction changed from the left to the right.” On page 250 of the book The Mass and Vestments of the Catholic Church: Liturgy, Doctrine, History and Archeology, by the Rt. Rev. Monsignor John Walsh, published by Benziger Brothers in New York in 1916 [a renowned Roman Catholic publishing house], the Nihil Obstat and Imprimatur are included, and it says: “The Sign of the Cross. This is made always with the right hand on the forehead, breast, left and right shoulder, with the following distribution of the formula: “In the name of the Father” on the forehead; “and of the Son” on the breast; “and of the Holy Spirit, Amen,” as the hand passes from the left to the right shoulder. Until the sixteenth century and Pope Pius V [1566-1572], the custom was to carry the hand from the right to the left shoulder, which still continues in the Greek Church [emphasis added by the Roman Catholic editor]. The Pope, bishops, and members of the Carthusian and Dominican Orders follow the primitive arrangement of the fingers in signing the Cross by closing the little and ring fingers of the right hand, and extending the other three. The three extended fingers symbolize the Blessed Trinity and the two folded ones the twofold nature of Christ” (both God and Man). When one reads the reason for Pope Pius V’s decision, we find that the reason was that he was angry with the Eastern Church, and made this decision on the basis of anger and for the purpose of increasing the division of the One, Holy, Catholic, and Apostolic Church [emphasis added].

After reading this information I began to think that, by making this simple Sign of the Cross, I am making a profession of faith as did the early Christians and Martyrs. . . and the many other Saints who made the Sign of the Cross in the same way, and that while I cannot equal their sanctity or life, I do share with them this symbol of faith of the undivided One, Holy, Catholic, and Apostolic Church, unchanged until the sixteenth century.

Note of the Orthodox Christian Witness: To us, it is also a sign that these good people should abandon all the other practices and doctrines in which the Papacy has, literally, misdirected them for over a millennium. Also, thanks be to God, Christ has not proved to be a false prophet. The gates of Hell have not prevailed against His Church. It is still the undivided One, Holy, Catholic, and Apostolic Church.

Most viewed articles
Into the Heart of the Capitol210
Admitting That We Hate120
Number of Christians Murdered for Faith Rose 60 Percent in 2020: 50 Most Dangerous Countries to Be a Christian102
Funeral for Metropolitan Philaret Held in Minsk86
Building a Fire and Preparing for Theophany53
Homily on the Circumcision of Our Lord Jesus Christ41
Churches to Reopen in Greece on January 1825
God Is With Us… And Nothing Else Matters1
Most popular authors
Archpriest Stephen Freeman210
Archpriest Michael Gillis120
Pravmir.com team110
Charlene Aaron102
Fr Gregory Scratch53
Protopresbyter George D. Konstantopoulos41
Maria Trushanina1
Fr. Gabriel Bilas1