The Skull on the “Russian” Orthodox Cross

The skull that viewers can see in iconography of the orthodox crucifixion symbolically represents the skull of Adam. Some believe (although this is not a dogma of the Orthodox Church, but rather a pious tradition) that Jesus was crucified on the same place where Adam was buried. Theologically, it does make sense because in the writings of St. Paul the Apostle Jesus is called second Adam.
| 20 November 2008 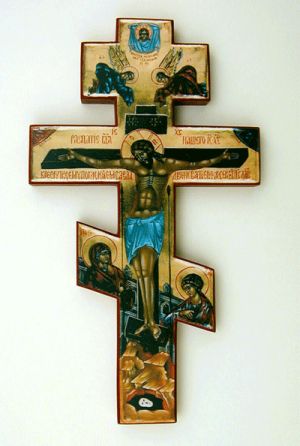 Orthodox iconography includes symbolism to emphasize some important aspects of the depicted person or event that took place in biblical times or recently.

In the Orthodox Church

, especially in Slavic countries (former Kievan Rus), the Crucifix is one of the examples of telling story through both actual occurrence and symbolism that in turn refers the viewer to something else in biblical history and gives to the story more meaning.

No doubt, Jesus was crucified on one bar cross. However, Eastern Orthodox Crosses have three bars. The middle one is the actual cross. The top bar represents the inscription that Pontius Pilate nailed to the cross above the head of Jesus Christ and the bottom one is the footstool – rest for the feet to prolong agony of the one that was crucified. Nobody would survive crucifixion if there was no footrest as hands and feet would have been torn under the heaviness of the body. However, in orthodox iconography you will see the bottom bar is at the angle to the main post with the right side pointing up and left side pointing down.

Of course, actual footrest was not in this position; however, specifically this position reminds the viewer about the story of the thieves or robbers that were crucified on both sides of Jesus Christ.  The one on the right hand side was promised place in Paradise for acknowledgement of his wrong doings, his repentance   and humility. The one on the left hand side complained, mocked Jesus and ended up in the opposite place for the deeds that he had committed in his life.

The skull that viewers can see in iconography of the orthodox crucifixion symbolically represents the skull of Adam. Some believe (although this is not a dogma of the Orthodox Church

, but rather a pious tradition) that Jesus was crucified on the same place where Adam was buried. Theologically, it does make sense because in the writings of St. Paul the Apostle Jesus is called second Adam. Just as through the first Adam we all become inheritors of the fallen human nature and therefore are subject to death, through the second Adam, Who is Jesus Christ, we become inheritors of the renewed, healed human nature and granted life eternal. So, this symbolism in iconography touches some theological aspects of Christianity, as well.

Imagine that someone illiterate or does not speak the language of the parish but who at least heard the story looked at the cross… he/she would be reminded of the entire story instantly!

By the way, Orthodox Church

does recognize one-bar cross, two-bar cross and three-bar cross. Historically, orthodox came to use the three-bar cross more often because of the symbolism and much fuller expression of our belief, or as a part of our Holy Tradition that makes emphasis on the entire account rather then on a story as a separate subject.