The state of Christianity in Israel 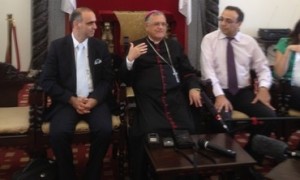 Leading Christian clerics of varying denominations expressed concern Monday about challenges facing Christians living in Israel, including limited housing and job opportunities, a general misunderstanding about them among Israelis, and the peace process.

Luminaries within the Lutheran, Latin, Greek Orthodox and Evangelical sectors met with international journalists in Jerusalem’s Old City to discuss Christianity’s current state of affairs in the Holy Land. The meeting was sponsored by the Government Press Office.

According to a 2012 report by the Central Bureau of Statistics there are 158,000 Christians living in the country, representing two percent of the total population.

Of that population, approximately 80 percent are Arabs, with the remainder mostly immigrants from the former Soviet Union who immigrated under the Law of Return.

At Notre Dame Center in Jerusalem Monday morning Father Pietro Felet, of the Assembly of Catholic Ordinaries of the Holy Land, said the Christian community living in Israel is having trouble defining itself due to its numerous denominations.

“We’re having some difficulties in defining ourselves in the Holy Land,” said Felet. “We are not a national church, we are a mixture of Arab Christians, Hebrew-speaking Christians and Christians from the former Soviet Republic. About 45% are Catholic, 40% are Orthodox and 20% fall under the category of ‘other.’” Most Christian Arabs live in northern Israel, the CBS report states. The cities with the largest Christian populations are Nazareth, with 22,400, Haifa with 14,400, Jerusalem with 11,700 and Shfaram with 9,400.

While the Christian population is growing at a rate of 1.3% annually, it lags behind Jewish and Muslim growth, which is 1.8% and 2.5%, respectively, according to the report.

Due to the fractured nature of the Church, Felet emphasized the importance of engendering greater understanding of the Christian presence in Israel.

“Above all, we are living in a pilgrimage place, because from here all things begin,” he said.” Understanding is the basis for coexistence and our goal is to promote further understanding of the Christian presence in the Holy Land.”

Father Pierbattista Pizzaballa, of St. Savior’s Monastery in the Old City, discussed the historically tenuous relationship between Christians and Jews, although he noted a marked improvement over the past 50 years.

“The history between the Church and Judaism is well known,” said Pizzaballa. “In the last 50 years relations have changed dramatically for the better, but the past was painful – was difficult.”

While Pizzaballa conceded that “many things remain to be done,” he noted that the Catholic Church has an 800-year presence in Israel and therefore must be treated with greater “legitimacy.”

“Catholics are not foreigners here, they are citizens of Israel,” he said. “We want cultural relations to improve from all aspects of our lives. We know that what happens in Israel is important for the Catholic Church around the world.”

Pizzaballa cited the need for a strengthened relationship between the church and local authorities to provide better housing, professional and education opportunities for Catholics. Although he said the education level among Christians is high, many still are finding it difficult to find sustainable jobs.

“One of the problems for the Catholic Church in Jerusalem is land and housing, which is very expensive,” he said. “To get more land that means money, but for a normal family, the prices are almost impossible [to afford].”

While Pizzaballa said the Church has built hundreds of housing units for Christians – including 400 in the Old City’s Christian Quarter, with projects planned in Jaffa and Nazareth – it is struggling to provide more, due to pronounced fiscal limitations.

Still, he said he hopes current negotiations between the Church and State of Israel will lead to better living standards for Christians shortly.

“There’s a negotiation now to arrive at an agreement about the life of the Church in Israel concerning economic and fiscal aspects,” he said. “It’s a fundamental agreement about all the aspects of life for Christians, and we are getting very close. So I am encouraged.”

In terms of hate crimes against Christians, including vandalism of holy sites, Pizzaballa said the Church has received support from the Israeli Police and authorities, but added that more needs to be done.

“If you don’t denounce these issues when they happen they will continue,” he said. “We need to work on this.”

Latin Patriarch of Jerusalem Fouad Twal said he believes the best hope for a prospering Christian community here is education.

“I believe in education because all the children should study together and play together to create a new generation that has respect for one another,” he said.

“I often say that Jerusalem does not belong to anybody – we all belong to Jerusalem.”

In terms of the challenges Christians face in Israel, Twal said dialogue is the best means of forging improvements.

“As you all know, we are all for dialogue,” he said. “The first person who started the dialogue was God, through prophets to humanity.”

However, Twal said politicians are obstacles to improved relations, due to the frequent closings of Jaffa Gate and the New Gate in the Old City resulting from numerous tourist and sporting events.

“All the good intentions we have in our dialogue are ruined because of the politicians involved,” he said. “I’m not very happy. Why? Because Jerusalem is holy for everyone.”

“[The politicians] must stop closing Jaffa Gate and the New Gate, which prevents pilgrims from visiting,” he continued. “We don’t need all these tourist events. I’m grateful that they open the door for me, but I wish they would open it to everyone.”

Regarding peace, Twal said he was pleased there is progress in negotiations between Palestinians and Israelis – and that the European community is getting more proactively involved in the process – but emphasized the necessity of improving coexistence immediately.

“If we think about all of our children in 20 years, we have to change something now,” he said.

“They cannot live like this for eternity. We want peace for everyone, and it’s impossible to think about peace for one group and not the other.”

Lutheran World federation president Bishop Dr. Munib A. Younan – the first Palestinian elected to head a universal church – said there is an alarming level of ignorance about Christianity in Israel due to generalizations propagated by the media.

When I read in the Hebrew media about Christianity, I wonder if I’m Christian,” he said. “One of the things we face as Christians are generalizations about us being persecuted in Palestine or Israel. There are issues between us [and the governments], but please don’t say ‘persecution.’” Younan went on to denounce travel restrictions for Christians coming from Bethlehem and Ramallah to the capital.

“Everybody wants to be in Jerusalem. Why can’t a person cross with dignity?” he said. “Why must [soldiers] take away their dignity? This is not acceptable.”

“It’s very essential that people can afford to live in Jerusalem – the center of their lives,” he said.

“But the economic situation is very hard, even though most of the people are well-educated. The Church tries to help, but we are not an employer, we are a church.”

With respect to peace negotiations, Younan said while the church encourages dialogue, he denounces further settlement construction and talks that do not address the pre-1967 borders.

“We believe in dialogue of the 1967 borders, that settlements should stop and right of return for refugees be granted,” he said. “We have doubts whether talks are serious or not. We don’t want the Americans to pressure us – we want to show that there is willingness for peace.”

Younan added that Jerusalem must be shared, without the “army dividing it.”

“I travel all over the world and everyone asks me about Jerusalem,” he said. “And they think that if there isn’t a just situation for Jerusalem, than nothing will work.”

“We need a win-win situation and we must deal with this difficult situation now,” he continued.

“Extremism will drop once there is a peace process. There is no other option – war is not an option.”

Younan concluded that he believes that mutual recognition of opposing groups’ humanity must be the first step in the peace process.

“Only then will this truly be the land of ‘milk and honey,’” he said.