The Synod of Bishops Concludes Its Regular Session 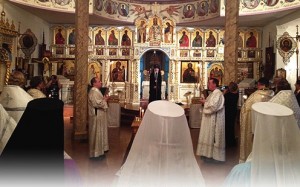 During a meeting of the Synod of Bishops on Tuesday, June 19, 2013, presided over by His Eminence Metropolitan Hilarion of Eastern America and New York, First Hierarch of the Russian Orthodox Church Outside of Russia, its members heard a report by Protopriest Andrei Sommer, Senior Priest of the Synodal Cathedral of Our Lady “of the Sign” and Vice President of the Synodal Youth Department, on youth ministry in the Russian Church Abroad. The Synod gave its blessing for the organization of the 13th All-Diaspora Russian Orthodox Youth Conference to be scheduled in San Francisco, CA, in June, 2014. The Synod also decided to concurrently convene a regular Council of Bishops of the Russian Orthodox Church Outside of Russia in that city to mark the 20th anniversary of the canonization of St John of Shanghai, Miracle-Worker of San Francisco. The Council Organizing Committee will consist of His Eminence Archbishop Kyrill of San Francisco and Western America, Secretary of the Synod of Bishops; His Eminence Archbishop Gabriel of Montreal and Canada, and His Grace Bishop Theodosius of Seattle, Vicar of the Western American Diocese.

The archpastors also discussed matters pertaining to the restoration of the Synod residence in New York, the Russian Ecclesiastical Mission in Jerusalem and the Orthodox Palestine Society.

That evening, His Beatitude Metropolitan Tikhon of All America and Canada, Primate of the Orthodox Church in America; Metropolitan Hilarion; His Eminence Archbishop Justinian of Naro-Fominsk, Administrator of the Patriarchal Parishes in the US; and a host of clergymen performed a pannikhida to mark the 400th anniversary of the Romanov Dynasty. Present at the service were Igor Leonidovich Golubovsky, Russian Consul General in New York, many members of Russian society and other worshipers. The Synodal Choir sang magnificently under the direction of Peter Fekula. After the sixth song of the canon, His Eminence Archbishop Mark of Berlin and Germany delivered a sermon.

Other administrative matters were also discussed, as well as intercessions by the archpastors for ecclesiastical awards to their clergy and laity.

The next meeting of the Synod of Bishops is scheduled for the official celebration of the 400th anniversary of the Romanov Dynasty to be held in Toronto, Canada, on September 4-8.

Why Does God Humble Us?

Truly, O Lord, if we do not humble ourselves, You do not…

Life-size statue of King Michael I…

In some areas of church life, innovation is appropriate, but the practice…

Most viewed articles
The Religion of Self212
Patriarch Kirill Answers Questions from Participants of the Ninth Faith and Word Festival137
(VIDEO)Celebrating 5 years of Byzanfest International Orthodox Film Festival136
Why Pray if Nothing Changes?97
The Pain that Leads to Joy89
Patriarch Kirill Speaks on Appropriate Innovation in the Church87
“He preached the message of the Resurrection for 12 years”: First Bishop of Deva Gurie Georgiu laid to rest at Cathedral of St Nicholas83
Patriarch Kirill: “An Effective Way to Overcome Social and Economical Dead End Is to Be Guided by the Word of God”79
Life-size statue of King Michael I unveiled in Sinaia marking 100 years since the monarch’s birth72
Why Does God Humble Us?24
Most popular authors
Pravmir.com team439
Fr. Gabriel Bilas212
Aurelian Iftimiu155
Metropolitan Hilarion (Alfeyev)97
Fr. Andreas Agathokleous89
Archpriest Michael Gillis24