The Throne and the Cross

Every time we look upon the Cross of Christ we are like the Prophet. We, too, see the Lord of Glory: yet neither on a Throne surrounded by lightening, thunder, and clouds, nor among blinding light, but rather among thieves in a place of criminal execution. This execution was of the most repulsive and terrible kind, both of its time and of all times: a half-dead man – neither corpse, nor man – hung for hours, and sometimes for days, nailed to the beams of a cross, disgraced before the crowd.
Archpriest Alexander Men (+1990) | 22 May 2012

The Book of the Prophet Isaiah tells of how he had a vision in the Lord’s Temple. [1] While praying in the Inner Sanctum, a bright light suddenly shone in the darkness and the walls of the Temple seemed to move apart. The Prophet saw the Glory of God with his spiritual eyes, shown to him as a great Throne on which Someone was seated.

From Him came fire, blinding and blazing; His Throne was wrapped in smoke like the clouds of heaven. The Prophet felt this in his heart: “Woe is me! I am a sinful man, a man of unclean lips. I live among sinful people, but have been shown a vision of the Lord of Glory. I must die – for, indeed, can a man see the Glory of God and live?”

Thus thought the Prophet. The Lord raised him from the earth and placed a new heart into his heart and new eyes into his eyes, restoring his entire being. Then, having been purified, he could stand before the Lord and attend to His commands. 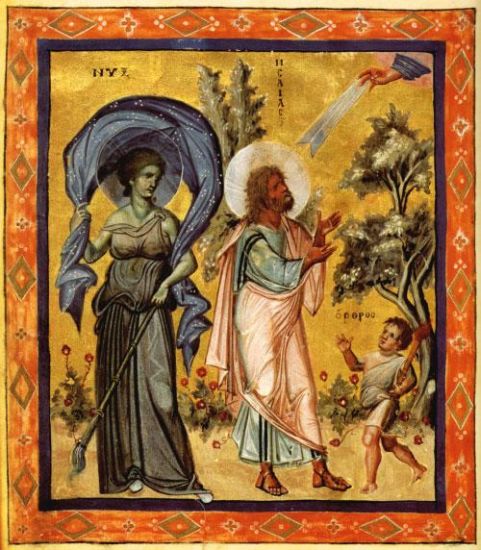 Every time we look upon the Cross of Christ we are like the Prophet. We, too, see the Lord of Glory: yet neither on a Throne surrounded by lightening, thunder, and clouds, nor among blinding light, but rather among thieves in a place of criminal execution. This execution was of the most repulsive and terrible kind, both of its time and of all times: a half-dead man – neither corpse, nor man – hung for hours, and sometimes for days, nailed to the beams of a cross, disgraced before the crowd.

When we see the Lord, we should say to ourselves: “Woe unto us, that we see Him like this, because He became wounded and bloodied like this by fault of us humans. He appears on the Cross like this because we are accomplices in His death.”

Why did the Prophet say that, having seen God, he must die? [2] Because people have been separated from God; they have departed infinitely far from Him. Yet let us also recall that, despite this, the Creator of the world continues to love every person and the entire earth. He would like to draw us near, to have us return, like the father in the parable of the prodigal son. It was for this that the Lord became man: that we might know His love and know Him Himself; that we might know and grasp this to the extent that we mortal beings are able.

We cannot pronounce His name without trepidation. For what is a name? The name we give Him is a human name, yet He Himself remains a mystery and a devouring fire to us – Infinite, Inexpressible, and Ineffable. He comes to us from His distance in order to speak with us in human language and in order that we might see His image.

It is no accident that in the Old Testament it was forbidden to depict God – no one can ever depict Him! No human images are worthy of the Glory of God. Therefore, He Himself took on our flesh and blood, our human soul and thought; He became man – He was incarnate, He came to His people, the human race He had created – to unite with the human race and become an intimate blood brother of everyone living on earth!

Think of this: if the blood that flows in us is the same blood that flowed in the veins of the Incarnate Lord, that means we have become kinsmen of the God-Man, that we have drawn near to the Creator Himself! He came into the world and, as the Apostle says, instead of the joy that should have been set before Him – a joyful meeting with His sons – He finds earth full of sin [cf. Hebrews 12:2].

Many centuries have passed since this was fulfilled. But He comes to us time and again, each time appealing to us from the Cross, each time showing us His wounds, in order to convince us of how great His love is. He descended to the very bottom of human life, down to where torment, despair, and death are found. He experienced all this along with all the people of the world, absorbing it all into Himself. And when He died, with Him died all the thousands of moribund who have ever lived on earth.

After all, we can reassure ourselves so well that we do not notice that we are becoming our Lord’s executioners. Do you think that the scribes and high priests who handed Christ over to death thought they were acting unjustly? No, they thought they were acting according to the Law and to God. Do you think that Pilate, who passed His sentence knowing He was completely guiltless, did not justify himself? No, he said to himself: one person less, one person more, and I will remain in place. Do you think that those who mocked Him had guessed that they were mocking the Savior of the world? Of course not! They overlooked everything; they noticed nothing; they justified themselves.

We are the same. We justify ourselves, although we spill the Lord’s blood daily. So, when an evil impulse arises in us, let us remember this: that every sin is a new thorn in His crown of thorns and a new nail thrust into His body. He came to give us joy, but we cause Him suffering and death.

[1] It should be borne in mind in the paragraphs that follow that this text is a transcription of an extemporaneous sermon delivered in church. Fr. Alexander conflates and freely retells elements from the vision described in Isaiah 6:1-13.

[2] Fr. Alexander appears to be following the Russian Synodal translation, which renders Isaiah 6:5 as follows: “And I said: Woe is me! I have perished (pogib ia)! … my eyes have seen the King, the Lord of Sabaoth.” The implication being that any mortal who sees God must die (cf. Exodus 33:20; Judges 13:22).