The Transfiguration of Our Lord and Savior Jesus Christ

The Lord took His three closest disciples (Peter, James and John) with Him on the mountain, although God sometimes reveals Himself to sinners in quite unexpected ways, it is usually those who have followed Him long and faithfully who are privileged to enter into the joy of the Transfiguration of the Master.
admin | 17 August 2005 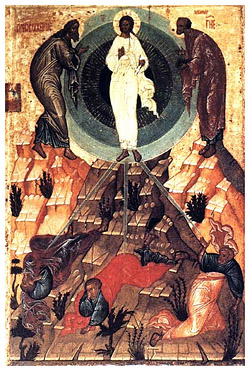 At one point in His earthly ministry. Our Lord asked His disciples. Who do men say that the Son of man is (Matt. 16:13)? The disciples gave various answers: John the Baptist, Elijah, Jeremiah, or one of the other prophets. Then He said to them. But who do you say that I am (Matt. 16:15)? Simon Peter replied, “You are the Christ, the Son of the living God” (Matt. 16:16). Shortly after this confession of faith, Jesus went up a high mountain (according to Church Tradition, Mt. Tabor) to pray, taking with Him Peter, James and John. And as He was praying, the appearance of His countenance was altered, and His raiment became dazzling white. And behold, two men talked with Him, Moses and Elijah, who appeared in glory and spoke of His departure, which He was to accomplish at Jerusalem. Now Peter and those who were with Him were heavy with sleep, and when they wakened they saw His glory and the two men who stood with Him. And as the men were parting from Him, Peter said to Jesus, “Master, it is well that we are here; let us make three booths, one for You and one for Moses and one for Elijah”-not knowing what he said. As he said this, a cloud came and overshadowed them; and they were afraid as they entered the cloud. And a voice came out of the cloud, saying, “This is My Son, My Beloved; listen to Him!” And when the voice had spoken, Jesus was found alone. And they kept silence and told no one in those days anything of what they had seen (Luke 9:29-36).

In the Old Testament, the presence of light and cloud often signified the Divine Presence: Then Moses went up on the mountain, and the cloud covered the mountain. The glory of the Lord settled on Mount Sinai, and the cloud covered it six days; and on the seventh day He called to Moses out of the midst of the cloud. Now the appearance of the glory of the Lord was like a devouring fire on the top of the mountain in the sight of the people of Israel (Ex. 24:15-17). Likewise, on Mt. Tabor the cloud signified the Divine Presence – the God-Man Jesus Christ, and the Theophany here was accompanied by a bright radiance.
Both Moses and Elijah had beheld the presence of God, as the Readings at the Vespers of the Feast point out, and thus were appropriate witnesses on Mt. Tabor to Christ’s divinity. In addition, as Jesus is the fulfillment of the Law and the Prophets, how appropriate it was for those who par excellence represented the Law (Moses) and the Prophets (Elijah) to be present.

The Lord took His three closest disciples (Peter, James and John) with Him on the mountain, although God sometimes reveals Himself to sinners in quite unexpected ways, it is usually those who have followed Him long and faithfully who are privileged to enter into the joy of the Transfiguration of the Master.

The bright radiance and shining of the face is also a characteristic of those closest to God. Such was the case of Moses, who spoke to God face to face: When Moses came down from Mount Sinai, with the two tables of the testimony in his hand as he came down from the mountain, Moses did not know that the skin of his face shone because he had been talking with God. And when Aaron and all the people of Israel saw Moses, behold, the skin of his face shone, and they were afraid to come near him. But Moses called to them; and Aaron and all the leaders of the congregation returned to him, and Moses talked with them…. And when Moses had finished speaking with them, he put a veil on his face; but whenever Moses went in before the Lord to speak with Him, he took the veil off, until he came out; and when he came out, and told the people of Israel what he was commanded, the people of Israel saw the face of Moses, that the skin of Moses’ face shone; and Moses would put the veil upon his face again, until he went in to speak with Him (Ex. 34:29-35). In more recent times this phenomenon was especially noted in the case of St. Seraphim of Sarov whose face shone like the brightest sun according to contemporary reports [Conversation with Motovilov].

In like manner, we all have the opportunity to be transfigured in our lives and to acquire a close relationship with God. So, too, we all have the opportunity to manifest the visible signs of those closest to God. In any case, as St. Paul tells us, when we die our bodies will be transformed (transfigured, as it were) and we will take on spiritual, radiant bodies. This aspect is clearly seen in the Transfiguration of Our Lord.

Troparion of the Feast (Tone 7)

Thou wast transfigured on the Mount, O Christ God, revealing Thy glory to Thy disciples as far as they could bear it. Let Thine everlasting light shine upon us sinner! Through the prayers of the Theotokos, O Giver of Light, glory to Thee!

Kontakion of the Feast (Tone 7)

On the mountain wast Thou transfigured, O Christ God, and Thy disciples beheld Thy glory as far as they could see it; so that when they would behold Thee crucified, they would understand that Thy suffering was voluntary, and would proclaim to the world that Thou art truly the Radiance of the Father!