The Trouble with Tolstoy

Tolstoy sees ritual, hierarchy, books by the Holy Fathers, catechisms, and theology; yet, all the while, he is completely blind to Christ. Without Christ, everything he sees in the Church falls apart, seeming like a collection of irritating absurdities.
Sergey Khudiev | 16 May 2012

The views of Leo Tolstoy – specifically those that gave occasion to the Synod’s well-known edict – have always enjoyed (and continue to enjoy) a certain popularity. [1] This is not just because of his indisputable literary genius, but also because Leo Tolstoy’s trouble is similar to that of many who observe the Church.

Tolstoy sees ritual, hierarchy, books by the Holy Fathers, catechisms, and theology; yet, all the while, he is completely blind to Christ. Without Christ, everything he sees in the Church falls apart, seeming like a collection of irritating absurdities. So, too, might someone attending a wedding, but not understanding the meaning of the proceedings, grumble about the young bride’s absurd dress, the groom’s awkward suit, the meaningless rite of exchanging rings, and the silly cries of “gorko.” [2]

The Church gathers around Christ, Who is risen and alive unto the ages of ages; without Him, everything else is meaningless. Leo Tolstoy’s trouble was precisely that he did not see the Risen Christ; he saw only a long-dead teacher of antiquity. He himself writes: 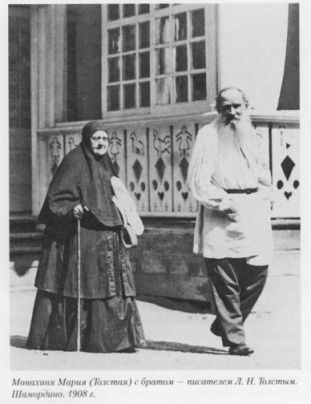 Leo Tolstoy with his sister nun Maria at Shamordino Convent, 1908.

“I believe in the following: I believe in God, Whom I understand as spirit, as love, as the source of all. I believe that He is in me, and I in Him. I believe that the will of God is most clearly and intelligibly expressed in the teaching of the man Christ, whom to consider as God, and to pray to, I consider the greatest blasphemy” (“Reply to the Synod’s Edict Excommunicating Me on February 20-22, and to Letters Concerning It”).

Tolstoy’s dispute with the Church was a dispute about Christ. Who is Jesus Christ? Someone who once lived in deep antiquity? A teacher who is dead, just like all the other ancient teachers? Or He Who abides invisibly, but in absolute reality, among those who believe in Him? Can we call upon Him in prayer, or is this the “greatest blasphemy”? Can He forgive sins, or is this forgiveness a “harmful deception, which only encourages immorality and destroys the fear of committing sin” (Ibid.)? Is Christ, merciful and compassionate, among us, comforting us in every affliction and meeting us at death’s door? Or is all this just “doctrine”?

The Gospel that is kept and proclaimed by the Church speaks of how God Himself, having been clothed in flesh, was crucified and buried for us, the ungrateful and debased. The Apostle John’s celebrated words “God is love” were in fact spoken about the God Who became man, giving Himself over to torment and death for our salvation.

Tolstoy’s “Gospel,” to the contrary, speaks about a good but rather dreamy and irresponsible man who was killed for speaking moral maxims. How the violent death of yet another good man can serve as testimony to God’s love is unclear. Then again, it is clear why, from Tolstoy’s point of view, we do not have a loving Savior Who gave Himself for us:

“That I deny the incomprehensible Trinity; the fable of the fall of the first man, which is altogether meaningless in our time; and the blasphemous story of a God born to a virgin to redeem the human race – is absolutely true” (Ibid.).

This choice – between a dead teacher and a living Savior – faces us as well, when we choose between the teaching of Tolstoy and the faith of the Church.

But it is important to make note of one more sad fact: people who accuse the Church of having departed from the Gospel, while maintaining that Tolstoy himself understood it directly and literally, have obviously read neither the Gospel nor Tolstoy. The moment we open Tolstoy’s The Gospel in Brief and compare it with the plain Gospel, we discover that Tolstoy has crudely shredded the text of the Gospel, discarding whatever of Christ’s words do not correspond with his own views, and sometimes even simply attributing his own words to Christ – often in direct contradiction to what the Christ of the Gospel says.

Subjecting any other text to such treatment – even a text by Tolstoy himself –would be considered highly dishonorable and, quite obviously, would not be accepted by the author’s admirers. It should hardly come as a surprise, then, that the Church could not accept such an arbitrary editing of the words of Christ.

[1] The Holy Synod, meeting on February 20-22, 1901, issued an edict excommunicating Tolstoy from the Church.

Most viewed articles
Faith and Moral Freedom82
The Trap of Religiosity82
Patriarch Kirill: “The Memory of the New Martyrs will Help Us to Be Faithful to Christ amid Modern Temptations”80
Bishop Nicholas of Manhattan visits Holy Cross Monastery in West Virginia76
Lord, Save Me!66
Patronal Feast Celebrated in St. Anna Convent in Vashkivtsi43
Condolences of Patriarch Kirill over the death of believers in the fire that broke out in Abu-Seifein Church in Cairo36
25 Years of Help: the Ship-Church Goes On its 25th Voyage to Distant Villages25
St. Tikhon Church to host Liturgical Music Symposium in October 202224
Most popular authors
Pravmir.com team284
Archpriest Michael Gillis82
Vasileios Stoyiannos82
Fr. Theodore Stylianopoulos66