THE TWELFTH SUNDAY AFTER PENTECOST 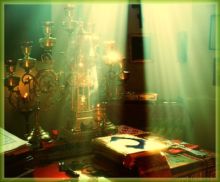 Today’s Gospel concerns the young man who asked Christ what it is necessary to do in order to have eternal life.

As it is said elsewhere in the Gospels, these two commandments are linked. For as we know from recent human history, from the history of dictators and tyrants, World Wars and human misery, those who do not love God, do not love God’s creation. And the summit of God’s creation is mankind. Those who hate men are those who have first hated God. And such haters of men are also those who hate the rest of God’s creation: those who recklessly cut down forests and pollute the air and the water and the earth, these too are haters of God, for it is clear that they hate God’s Creation. And thus they do the work of the Devil, which is hatred.

As others have put it, those who deny the Fatherhood of God, deny also the Brotherhood of man.

Let us also notice how our Lord tells us in this Gospel that we are to love our neighbour as ourselves. What does this mean?

And here we enter into the understanding of that terrible mystery of self-hatred, self-destruction through alcohol or other drugs, self-mutilation, even of suicide, that is, self-murder. Those who enter on to such paths are those who have so lost faith, being so blinded by misfortune and depression, that they have lost all faith in God to restore them to what they could be and have so lost faith in themselves, that they are ready to undertake their self-destruction. Having become blind to the Beauty of the Creator, they have become blind to the original and potential beauty of the Creation, which they are.

The young man who spoke to Christ today kept the commandments. Probably, this was fairly easy for him, he had been well brought up, he had been well instructed. However, our Lord tells him that there is a higher way to salvation, a way to become perfect. This is for him to give away all his wealth. The disciples, not yet enlightened by the Crucifixion, the Resurrection and the Descent of the Holy Spirit, were astonished at Christ’s words about the rich and asked who could be saved. His words seemed to them to be hard words and that therefore none could be saved.

However, if we examine more closely Christ’s words, we see that He does not say that the rich cannot be saved. Rather, He says that those who are attached to their riches cannot be saved. And this is the tragedy of the soul of the young man, For he went away sorrowful, for he had ‘great possessions’. In other words, the discerning eyes of Christ saw that the young man was unlike those disciples who had abandoned their fishing-boat in order to follow the Saviour; it was not so much that the young man had many possessions, rather that he was possessed by his possessions.

And this is the secret of wealth. In the history of the Church and in the Lives of the Saints, we can often read of many people who came into great wealth, but they did not allow themselves to become possessed of their wealth. They were wealthy for a time, and then gave it away, to orphanages, to beggars, to charities, to churches, to monasteries. They understood that wealth is granted by God, only for a time and only for a purpose. God calls the wealthy not to be possessors, but rather distributors, of wealth. We are called to be channels, instruments, agents of the grace and benefactions of God. Nothing should come from ourselves, we should be like mirrors reflecting God’s Will and Infinite Mercy.

Now, in this same Gospel, Christ tells us that in fact salvation is impossible with men, but that all things are possible with God. What do these words imply regarding our way of life?

First of all, we should not think that we are able to do anything by ourselves and certainly we are unable to save ourselves. Above all we should not think that what God allows us to do, we can do well, or even perfectly. Perfectionism comes from the sin of pride. Those who are perfectionist are too demanding with themselves and too demanding with others. Such people often feel frustrated, they become disillusioned, falling into discouragement and even despair. We are to avoid the spirit of self-reliance, the pride of doing things from ourselves. In any important undertaking, we are to ask for God’s blessing, to ask Him for His help, for His guidance.

On the other hand, we are not simply to sit back and abandon all efforts, expecting God to do everything for us.

We are never to despair, to lose hope, we are never to disbelieve in the results of Faith. As we sing in the Great Prokimenon: Our God is a great God, for He works wonders’. For it is He alone Who makes the impossible possible and the unattainable attainable. Glory to thee, O God, glory to thee!