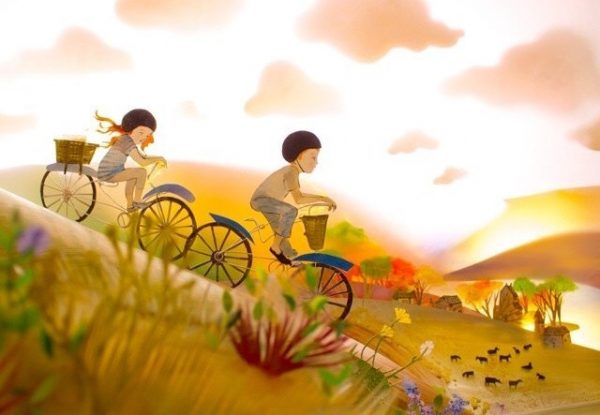 The Chronicles of Narnia began with the image of a faun carrying an umbrella and parcels in the woods. That simple picture stuck with CS Lewis from his youth until the age of forty when he began to turn that picture into a story.

Soon came a witch on a sledge and a lion. No religious meaning was contrived for any of it, Lewis simply wanted to write a story.

But since Christianity had so thoroughly formed him (one of his friends commented that he was the most thoroughly converted man they had ever met), what flowed out of Lewis was Christ. Some people have speculated that he decided to sit down and write an allegory for children to understand the Christian message. But he states he never set out to write a religious allegory, it is what naturally bubbled up from this man who lived in Christ.

I bring up this story to encourage people to do likewise with their lives. Not everyone has a church-related ministry. In a Protestant culture that emphasizes doing something (big) for God, many people wonder what their purpose is in life or how they can Christianize their work.

It seems to me that is approaching it the wrong way. Like Lewis, we should be so thoroughly converted, so deeply in Christ, that we bring the life, joy, and peace of Christ everywhere we go. We are called to be precious vessels of the Holy Spirit. The Spirit, fortunately, does not rely on our creativity – only that we commune with him and be present to every moment of every day.

By being such precious vessels, everything we touch will be Christianized, whether or not we are even aware of it – and it is my opinion that when it is authentic, we are unaware of the process taking place more often than not.

By setting out to do the work that has been given to us in life, each one of us can unconsciously bring Christ into everything we do. It is like the Midas touch that turns everything into Life.  Sometimes we’ll see it unfolding and be able to shape it further, other times it will happen on its own as God works through us unawares.

Most viewed articles
What Is Rejected Becomes the Cornerstone120
Hierarch of the Jerusalem Patriarchate Speaks in Support of His Holiness Patriarch Kirill91
The Forgotten Virtue of Stability89
Utah Church Prepares, Welcomes All for Consecration88
His Beatitude Patriarch Theophilos III and bishops of the Russian Church Abroad attend a concert marking the 150th anniversary of the birth of Sergei Rachmaninoff in Jerusalem86
The Savior of the Hopeless, or Is It Possible to Be a Good Person and Not Be Saved?73
Supreme Court Overturns Roe v. Wade in Mississippi Abortion Ruling65
‘The post-Roe generation’: Pro-lifers set their eyes on heartbeat bills, chemical abortion bans64
Most popular authors
Pravmir.com team265
Archpriest John Moses (+2019)120
Hieromonk Gabriel89
Alexander Tkachenko73
CBN News65
Ryan Foley64