“The Wind Crashed the Tent, in Which Children Were.” Storm Hit on a Tourists Camp In Krasnoyarsk Region 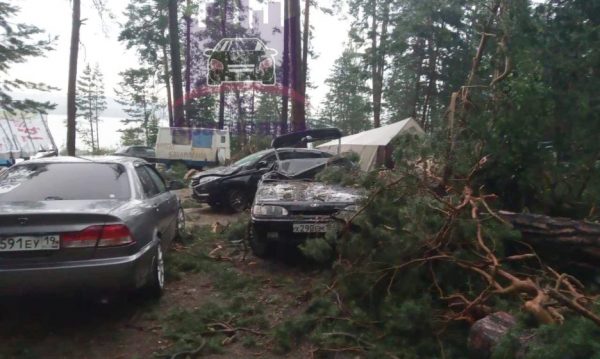 On the night of June 4-5, in the Krasnoyarsk region, 240 tourists were caught in a storm on Lake Masleevo. One person died on the spot, the second one died from injuries in the hospital, and four more were injured, including a 14-year-old teenager. Eyewitnesses told “Pravmir” how this happened and whether the tragedy could be prevented.

Igor Filippov and his children went for a weekend to Lake Masleevo in the Dzerzhinsky District of the Krasnoyarsk region, which was 110 km from the city of Kansk. They stopped at the camp site “Sparta”. “The weather was excellent: we sunbathed, rode a scooter”, Igor recalls. But on the night of July 5, a squally wind rose sharply: so strong that the canopy was torn off the tent, and Igor tried to hold it. By this time the children were already sleeping in the tent, and the adults were sitting near the fire. What happened next, the eyewitness calls nothing other than the end of the world.

“Sand began to rise and whirl on the beach, it was something like a sandstorm. Sand began to clog my eyes: nothing could be seen from a distance of one and a half meters. We moved by touch, someone was running somewhere, trying to hide. Then rain added to the sand. I felt that I was already carried along with the tent and let it go. At that moment I saw that the tent was folded, although it had seemed very reliable and stable. And there were children in it… I rushed to the tent, somehow managed to grab the children and carried them to the car. It seemed to me that it took me so long, in fact it took only a couple of minutes”, he recalls.

“Everyone tried to hide from the falling trees. The wind was so strong that they were not only pulled out by the roots, they were broken in half like matches”, Igor Filippov says. He managed to get into the car with the children and called relatives, asked them to drive there. The conversation ended in mid-sentence. There was no connection until morning, people could not get through to their relatives. Igor’s neighbors fled to the cars who had time.

“It’s still hard to recall. The children were very scared, especially the eldest daughter, the third-grader, because she understood everything, the younger ones were calmer. After 30-40 minutes, the storm ended turning into ordinary rain. We started to get out of the cars. People turned on the headlights, emergency lights. I went out and saw the trees lying in the place where our tent had been… I found the tent in the forest, it was thrown 250 meters away from us. We began to drive out little by little, nothing was visible, everything was littered with trees. Someone shouted that one woman had been killed and that an ambulance was expected, but the Emergencies rescuers could not break through to Masleevo, the road was blocked up”, Igor says.

According to eyewitnesses, the rescuers were on site about an hour after the hurricane. They cleared most of the road and at half past four in the morning people were able to leave.

A woman on whose tent a tree had fallen died, and her 13-year-old daughter remained alive. In the afternoon of July 6, it appeared that another tourist who had been resting on Lake Masleevo died in the hospital from injuries. The man was also inundated with trees when he was sleeping in a tent. On this fact, the Investigative Committee opened a criminal case on the grounds of the crime “Provision of services that do not meet safety requirements, resulting in the death of two or more persons by negligence” (part 3 of Art. 238 of the Criminal Code of the Russian Federation).

Four people were injured. Two victims, including a 14-year-old teenager, have already been discharged home, two more have received moderate injuries and are still under medical supervision.

“She Loved Life Very Much”

Valentina Monid came to the lake to relax with friends. During a hurricane, she slept in a tent with her daughter Olya. Her car was standing nearby. At the time of the storm, one of the pines fell right on their tent. The woman died on the spot; the girl managed to get out alive. The tree simultaneously crashed Valentina’s car.

Valentina’s friends call her a cheerful person, a good mother. In any situation she came to the rescue of her friends and relatives, no matter what help was needed, she was always there.

“Valya was a regular participant and long-time friend of the “Iron Felix” music festival, a keyboard player and the inspirer of the Ilan band “Shaman”, as well as an activist of the “Scorpions” fan movement. She really loved life. In addition, Valentina worked in a locomotive depot and loved to photograph locomotives. We will miss her very much”, Konstantin Kovalenko, the author of the festival idea, said.

Now Valentina’s friends are raising funds to organize her funeral and are asking for help. Valentina was raising her daughter alone; the family had no relatives. The girl was taken to the family center “Ilansky” for the time being. But her mother’s friends are ready to accept Olya into their family.

“We Knew the Weather Forecast, but We Went Anyway.”

Why was the weather forecast not taken into account and the camp site management did not forbid putting up tents? Igor Filippov and other vacationers who survived that horror are asking themselves these questions.

“By and large, the people themselves are to blame, including us. We knew the weather forecast, but we went anyway. I have been vacationing in this place for several years, every year there are heavy rains and thunderstorms. Of course, trees do not always fall, but there is sandy, very loose soil. Therefore, a strong wind easily pulls them out by their roots. I think that the camp sites there are now working illegally, as there is quarantine in the region. They took 300 rubles for a place for the tent, they didn’t issue any checks. I know that vacation in a cottage is more expensive. I did not see any rescuers or doctors on site. Although, when all this happened, the camp staff helped on an equal basis with everyone. They pulled out people, helped to clear up the rubble.”

Nobody was hurt in Igor’s family. Already at home, he and his family noticed bruises and abrasions.

According to the Ministry of Emergency Situations in the Krasnoyarsk region, the abnormal heat in the region was replaced by thunderstorms, showers and strong winds. Cities and towns were flooded, power supply in some areas was disrupted. In Dzerzhinsky district, a severe hurricane passed.

Reports of adverse weather conditions were sent out on Friday, July 3. In central and southern areas, gusts of wind, thunderstorms and rains were expected. But people did not take this into account.

“In our memory, such an emergency in this place has not happened before. However, the climate is changing throughout the region, early spring has begun, and such natural disasters are not uncommon. The most important thing in such cases is to be vigilant. If you see the weather getting worse, it’s better to pack up and leave as soon as possible, which is what some of the vacationers on Masleevo did”, “Pravmir” was told at the Ministry. “In any situation, you need to remember that you shouldn’t set up tents close to a pond, they can be carried into the water. You shouldn’t park cars under trees and you should try to arrange a camp so that you can always quickly leave, and not be blocked by other campers.

The way the tents were set up on Masleevo Lake and whether victims could have been avoided are now being investigated by the Investigative Committee for the Krasnoyarsk region. The Emergencies Ministry employees and the rescuers of the regional institution “Spasatel” have already cleared the area from rubble and sawed down the fallen trees. In total, 33 people and 10 pieces of equipment were involved in eliminating the consequences of the disaster.